Basic Structure: Elephant in the room as Appeal Court rules on BBI 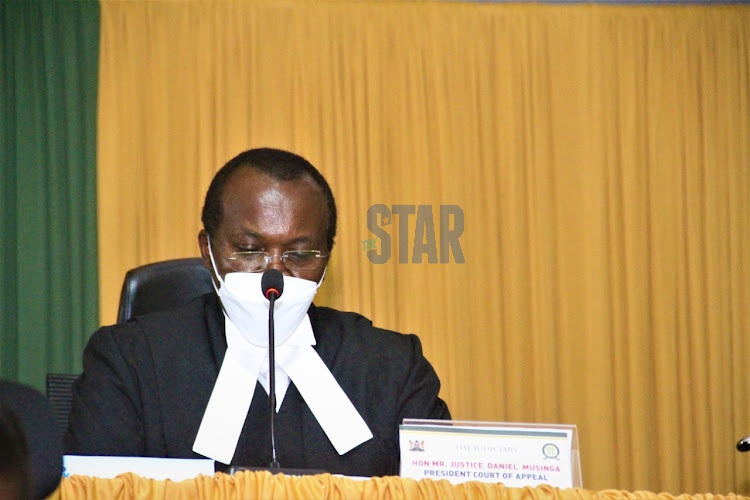 Appeals Court President Daniel Musinga during the ruling on the BBI on August 20, 2021.
Image: EZEKIEL AMING'A

The High Court’s finding that the BBI Bill touched on unamendable clauses of the Constitution is among the contentious determinations at the center of focus as the Court of Appeal rules on the drive.

In their scathing ruling nullifying the entire BBI process on May 14, the High Court found that the bill sought to interfere with the doctrine of basic structure that protects certain fundamental aspects of the Constitution.

“There are certain provisions in the Constitution which are insulated from any amendment at all because they are deemed to express categorical core values,” the bench ruled.

The Judges said the provisions are unamendable and cannot be changed through the exercise of ‘secondary constituent power or constituted power.’

The finding arouses bitter arguments during the hearing at the Court of Appeal, with proponents’ lawyers bitterly faulting the Judges for the ruling.

“It is inconceivable that we can even attempt to entrench the doctrine of basic structure when the Constitution expressly provides the opposite and allows for any amendment through a parliamentary process or through a popular initiative,” senior counsel George Oraro said.

Former Attorney General Githu Muigai argued that the Constitution bestows the powers to change any part of the constitution on the people.

“We cannot agree on who the people are and can’t agree on basic structure when our constitution is very clear on what can be done to change it,” Githu said.

“It also includes the specific substantive areas Kenyans thought were important enough to pronounce themselves through constitutional entrenchment including land and environment; Leadership and Integrity; Public Finance; and National Security,” they said.

The Judges declared it as unconstitutional, null and void the entire BBI process that culminated in the Constitution of Kenya (Amendment) Bill, 2020.

Also at the core of attention is the High Court determination that the BBI steering committee appointed by President Uhuru Kenyatta was unconstitutional.

At the Court of Appeal, BBI proponents put up a spirited fight, arguing that the bill was promoted by the secretariat and not the president.

They also found that there was no enabling legislation as regards the conduct of referenda.

There was also a heated argument on finding that it was unconstitutional for the Kenya Bill to directly allocate and apportion constituencies.

IBEC, through its lawyers, sought to fight the High Court’s determination that it cannot conduct any proposed referendum as it had no quorum to conduct any business.

“It has not carried out nationwide voter registration and has no legal or regulatory framework for the verification of signatures as required by Articles 257(4) of the Constitution,” the court ruled.