Raila and Musalia on Sunday night held secret talks to break the ice and agree to work together. 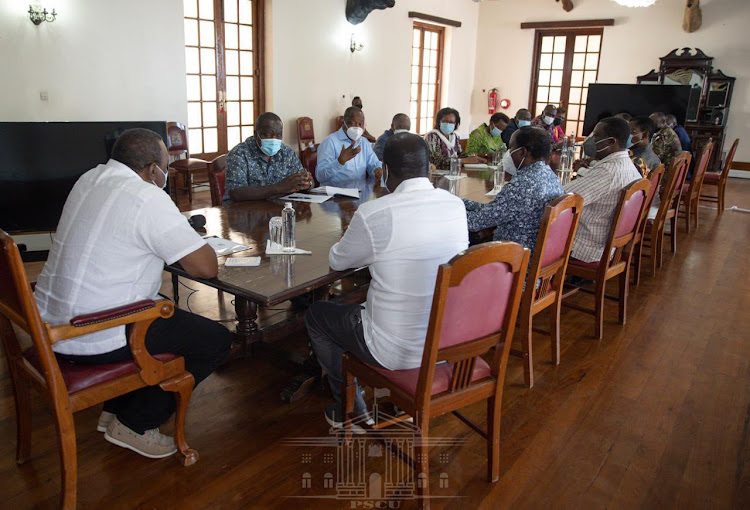 President Uhuru Kenyatta with the opposition leaders and other senior government officials at State House Mombasa on August 18, 2021

President Uhuru Kenyatta is inching closer to a political deal with One Kenya Alliance chiefs to endorse his handshake partner Raila Odinga for the presidency next year.

In a clear demonstration of his determination to convince the Oka principals to back Raila in the battle for the country's top job, Uhuru yesterday held decisive talks with the joint team in Mombasa again.

The meeting came just a week after the President held a similar meeting between Oka principals and Raila as he firms up his 2022 succession plan with 356 days to go. 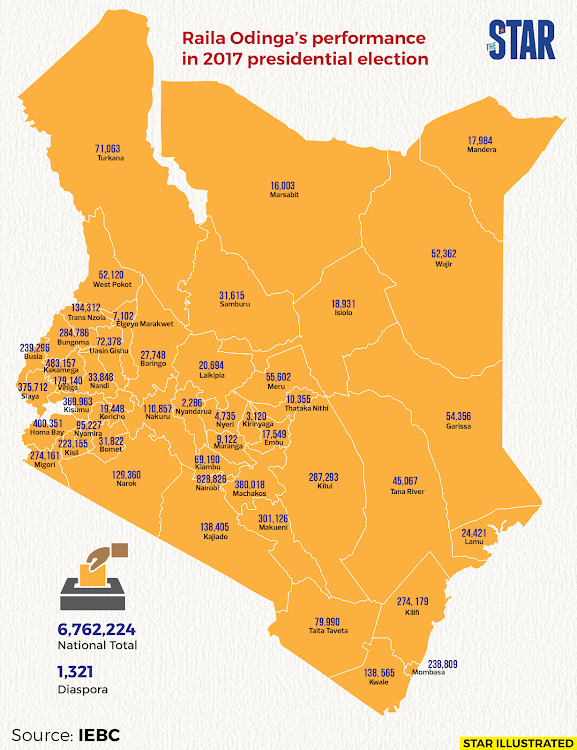 Although details of the State House meeting remained scanty, sources said "progress was made".

The Star has also established that Raila and Musalia on Sunday night held secret talks in Nairobi to break the ice and agree to work together.

The meeting was attended by Gideon and a powerful Cabinet Secretary.

It has emerged that Gideon could be the bridge between Oka on one hand and Uhuru and Raila on the other.

Musalia and Kalonzo have been playing hardball and have previously refused to back Raila.

At the Naivasha retreat, Gideon expressly reminded his colleagues that their only political opponent in the 2022 presidential duel remains Deputy President William Ruto.

“The journey which we are going now is going to be fought, and I will be honest, with blood and tears. It is a journey which we will have our total commitment and absolute faith in the outcome. Our opponents, I call it one opponent, I don't see others as opponents because it is just an issue of playing what is called musical chairs,” Gideon said.

In an audio recording of the Naivasha meeting obtained exclusively by the Star, Gideon warned that the leaders must work hard to craft a formula that would deliver victory irrespective who would be the candidate.

“He (opponent) too is extremely resolute in what he wants by whatever means possible. So let us not delude ourselves here. When we say that we are going to do something we do it no matter what,” Gideon said.

In the Naivasha meeting Kalonzo told his Oka partners that he was unhappy with Jubilee Party making a deal with ODM and then inviting them.

“They want us to look like we are the ones joining them. We have been very clear from the start that our doors are open for others to join. Let nobody pretend they are inviting us to join them,” Kalonzo said.

Jubilee top brass announced on Tuesday that they had obtained the nod of the party to start coalition talks with ODM and welcomed Oka to join the bandwagon.

The Oka chiefs, however, failed to agree on the 2022 line-up after their two-day retreat in Naivasha and opted to instead fly to Mombasa to meet the President together with Raila.

Tellingly, as Oka chiefs snubbed the elephant in the room. Raila unveiled what was interpreted to be his 2022 presidential manifesto in an event held in Uhuru's Nakuru turf.

In an address that looked presidential and toned down from his usual raw political jibes, Raila said he will soon launch a bigger political vehicle that will deliver the country to the promised land.

There have been reports that Kalonzo is playing hardball on a Raila candidature and is insisting that the Oka team go all the way to the ballot even as Uhuru intensifies negotiations to hammer a deal.

On Wednesday nominated MP Maina Kamanda, a key Uhuru ally, maintained that the ongoing behind-the-scenes talks will culminate in Raila being the joint presidential candidate next year.

“We are almost there and as I have always said 2022 will be a Raila moment and nobody will stand on his way,” said Kamanda, an influential Uhuru ally from Mt Kenya.

The former Starehe MP revealed that a lot was being done behind the scenes to ensure the team presents a joint candidate to face Deputy President William Ruto in next year's general election.

“The journey began in Nakuru on Tuesday for a Raila presidency and after the Mombasa meeting, things will not be the same again,” Kamanda said.

Last week, Uhuru unequivocally told the former Nasa chiefs that he was ready to support them only if they united and rallied behind Raila whom he said has a clear chance of winning the presidency.

During the meeting, the leaders had indicated that they would get back to the President after consulting their relevant party organs. The consultations happened in Naivasha on Monday and Tuesday.

Yesterday, a dispatch from State House was scant on details of the political negotiations that dominated the meeting, only confirming that the President met the opposition chiefs.

“Once again, the political party leaders applauded government efforts to contain the spread of Covid-19 in the country, and appealed to Kenyans to take personal responsibility so as to safeguard the health and wellbeing of all Kenyans,” read the statement signed by State House spokesperson Kanze Dena.

However, earlier in the day during an interview with Luo radio station Nam Lolwe FM, Raila hinted that the Mombasa meeting was about 2022 succession politics.

“We want to tell them [Oka chiefs] the status of things and the path we want to take. So if they agree to join us then we walk with them. That is what we are going to tell them with President Uhuru Kenyatta,” said Raila ahead of yesterday's meeting.

He went on: “We have worked with them before and we know them. We are not looking down on anyone but we welcome them to join us.”

Raila's remarks lifted the lid on the ongoing negotiations between him and the Oka chiefs to craft what he has been called a mass movement that will clinch the presidency next year.

Even as Raila revealed the agenda of the meeting, Butere MP Tindi Mwale, a key Musalia ally, warned the ANC boss against being coerced to drop his presidential ambitions.

He protested against the Mombasa meeting.

“The "cancer"in our One Kenya Alliance and "Opposition" in general is the vulnerability of being coerced (Kupangwa) to take a certain political direction,” Mwale said in a statement.

“We made a resolution in Naivasha yesterday that the OKA presidential candidate shall come from the affiliate parties. Why again go to Mombasa to open a window of being sweet-talked to support another person?”

Ruto chides Raila, OKA chiefs over political parties ahead of 2022

“They must first dismantle their ethnic-based parties and form a national outfit,” Ruto said.
News
5 months ago

President cites poll which showed that Raila is by far the most popular.
News
5 months ago

Presidency is yours to lose, Uhuru tells opposition chiefs

President tells Raila, Oka chiefs either they unite or forget presidency in 2022.
News
5 months ago
by JAMES MBAKA AND LUKE AWICH
News
19 August 2021 - 07:00