Kwemoi died on Friday at a hospital in Mt. Elgon, aged 23.

•Kwemoi died on Friday at a hospital in Mt. Elgon, aged 23. 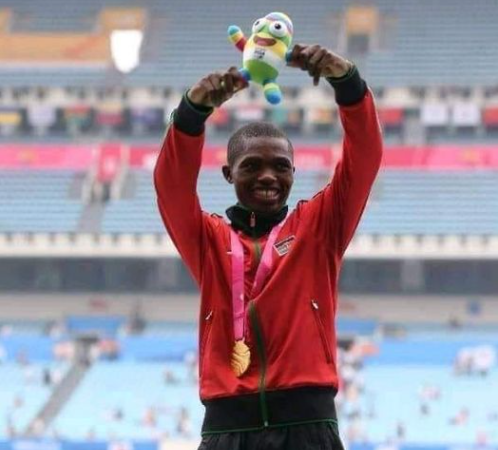 Kwemoi died on Friday at a hospital in Mt. Elgon, aged 23.

"It's painful to type this, Rest In Peace Gilbert Kwemoi,"  said Chemos.

Reports indicate that Kwemoi had a headache and was rushed to the hospital where he was pronounced dead on arrival.

Senate Speaker Ken Lusaka remembered the deceased as a humble, talented, and outstanding sportsman who had a bright future.

"After he won gold at the African Youth Games in Gaborone, Botswana in June 2014, Kwemoi paid us a courtesy call when I was Bungoma's first Governor. During our brief tête-à-tête, he struck me as a focused and hardworking young man who would not let anything stop him from shattering world records."

"Sad that we lost him before he attained his full potential. My deepest sympathies and heartfelt condolences to his family, friends, the people of Mt Elgon, and the entire athletics fraternity during this difficult time. Rest In Peace Chitab Koreet," Lusaka said.

Kwemoi won gold in 1,500m during the 2014 Youth Olympic Games and bagged a silver medal at the African Under20 Championships in Addis Abeba, Ethiopia in 2015.

Post a comment
WATCH: The latest videos from the Star
by BRIAN ORUTA Digital Journalist
News
14 August 2021 - 14:46
Read The E-Paper