• Kalonzo and Gideon Moi reportedly considering the proposal even as Mudavadi insists he will be on the ballot in next year's election.

• Uhuru argued that Raila remains the most formidable politician to face off with Deputy President William Ruto in his succession race. 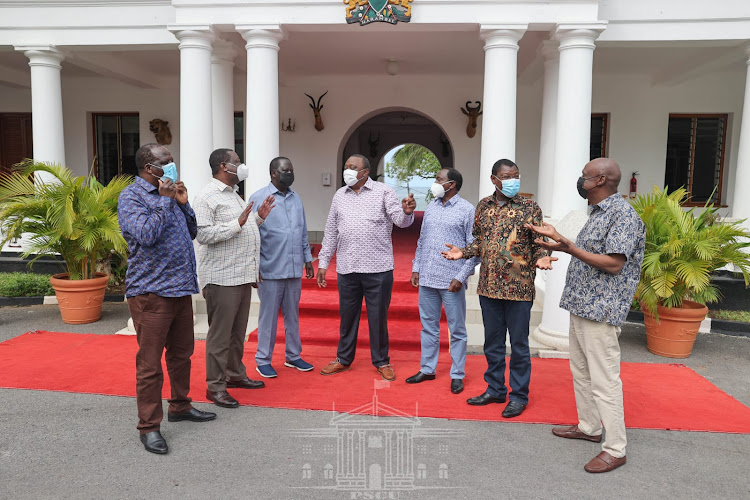 The President reportedly showed the politicians an opinion poll which indicated Raila was by far the most popular.

Uhuru argued that Raila remains the most formidable politician to face off with Deputy President William Ruto in his succession race.

Uhuru's relationship with his deputy has hit rock bottom and he is expected to campaign against Ruto in next year's general election.

“The President warned the team they will lose to Ruto if they don’t unite and face him as a team,” a source told the Star.

The source said no deal was reached, with ANC leader Musalia Mudavadi and Ford Kenya's Wetang'ula furiously protesting about the presence of Oparanya at the meeting.

“The two felt that Oparanya’s invitation was meant to undermine them and openly protested in the presence of the President,” the source said.

Oparanya is ODM deputy party leader and Raila has clung onto him lately, tagging him to high-profile meetings, months after it emerged that Ruto was reaching out to the influential governor to join his hustler camp.

Despite launching his 2022 command centre, Wiper leader Kalonzo Musyoka is said to have a soft spot for Raila’s candidature. The same feeling is with Kanu boss Gideon Moi.

Speaking in Likuyani, Kakamega county on Wednesday, Mudavadi said reports on social media that the meeting was convened to convince OKA principals to support Raila were misleading.

He maintained that his name will be on the ballot next year.

Kakamega Senator Cleophas Malala, who had accompanied Mudavadi in Likuyani, said the ANC party leader would not play second fiddle to anyone.

Uhuru is expected to schedule another meeting and asked the former Nasa principals to ponder about what was laid on the table.

After the meeting, the Opposition chiefs remained tight-lipped.

However, a confidant of one of the OKA principals said Raila was told that he was free to join the alliance but not as the automatic leader.

“They stood their ground and that is why it was decided that they all needed time to think about what each other wants,” the confidant said.

On June 15, Uhuru challenged the Opposition chiefs to unite to enhance their chances of forming the next government after he retires next year.

The President is keen to have the opposition united to enhance their chances of beating Ruto in next year's presidential election.

Mudavadi has maintained he will run for president next year, ambitions of his partners in OKA notwithstanding.

He has increased visibility with tours across the country in recent weeks.

The former vice president has already toured Nyeri, Nakuru and Nyandarua counties, where he met area leaders. He has also toured Mombasa and Garissa counties.

Mudavadi has ruled out working with Raila again unless the former Prime Minister agrees to support his presidential candidature.