This rendered hundreds of people homeless sparking a crisis in the area. 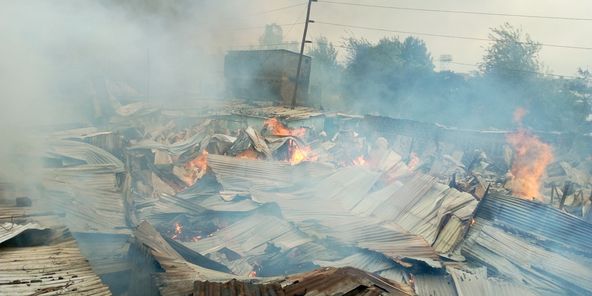 More than 600 households were Wednesday evening affected when a fire razed down almost the entire Blue Estate slum in Shauri Moyo area, Nairobi.

This rendered hundreds of people homeless, sparking a crisis in the area.

Nairobi regional commissioner James Kianda said the fire started from one house before spreading fast to others razing them down.

He said no death or injury was reported during the fire at the informal settlement, but added thousands had been left homeless.

He said they suspect the fire was started by an electric fault.

“It is unfortunate for these residents and we will continue a crackdown with Kenya Power to ensure all illegal connections of electricity within Nairobi are dealt with," he said.

The arrival of a fire engine at the scene did not help as the fire had spread fast and gutted down a large place.

Those affected spent their night at a hall and Kianda said they were to be provided with food and other items on Thursday.

Police arrived at the scene and provided security to those affected overnight as they planned to move out or reconstruct the structures.

The victims have asked for help to reconstruct their structures.

Meanwhile, two suspected thugs were Thursday morning shot dead by police in Mathare slums and stolen items found on them.

The two were killed at Kiboro Bridge as they attacked and mugged pedestrians at about 5 am.

Police say they also recovered a getaway motorcycle from the slain men. They were from a mission and had stopped at the site to rob pedestrians when an alarm was raised alerting police on patrol.

The bodies were taken to the mortuary. Police say they have intensified patrols in the city to address incidents of violent robberies.