•The fact that President Uhuru and Jubilee worked very hard to demonise Raila is something that can’t be undone with a simple handshake.

•People in the region actually turn up to vote against Raila more than to vote for their own preferred candidate. 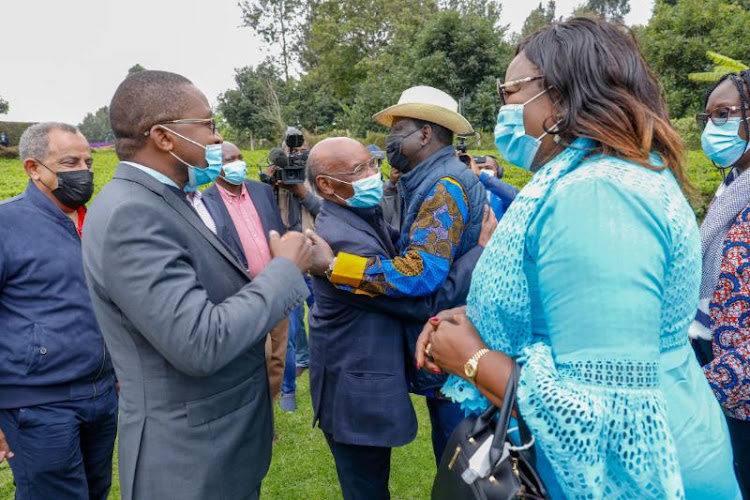 ODM leader Raila Odinga has visited Central many times but he is a hard sell. He has tried getting the support of key people from the region, including S.K. Macharia who was part of the 2013 Cord summit together with Kalonzo Musyoka and Moses Wetang'ula.

It’s not the first time the media mogul has openly supported Raila but it hasn’t worked. He even recently led a group of elders — together with Jeremiah Kioni, Maina Kamanda and Zack Kinuthia — to Raila’s Bondo home.

The problem is that Raila has been demonised as the antithesis to the aspirations of Mt Kenya as a region. His rhetoric of reform and change movement has been sold as anti-business and to mean 41 against one.

He is the object of hate for many people in the region because the older Kenyatta differed with his father Jaramogi, the fallout in Ford and later on with Matiba, the frosty relationship with Kibaki under Narc, and later on under the Grand Coalition government under the National Accord.

During the last election, one only needed to shout Raila Bondo, meaning  he retires and goes home, as a means of mobilising voters to turn out in large numbers to send him home and deny him the presidency.

He is so unpopular that it has personally cost President Uhuru Kenyatta the near-fanatical following in his own backyard, by simply associating with him. People in the region actually turn up to vote against Raila more than to vote for their own preferred candidate.

Now that the region may not have a serious presidential candidate in the 2022 general elections, DP William Ruto stands to benefit greatly, having stood with Uhuru two times in the presidential elections in 2013 and 2017.

Raila has also lost considerable support in his erstwhile strongholds of Coast, Western and Eastern, especially now that both ANC and Wiper have quit Nasa. Further, the Mt Kenya people have suffered a lot economically and they partly attribute this to the handshake.

But the President has been widely received with warm cheers and ululation as he tours Raila’s home region.

Moreover, there is a younger generation that doesn’t connect with Raila’s credentials on reform, a narrative that he has sold for over 30 years since 1992.

They don’t know Moi and his despotic regime, leave alone the fact that he is now deceased and was buried as a hero, not a villain.

The diaspora votes for Raila in places such as Kiambu, amounting to about 60,000 to 80,000 votes. That’s the best he can get as other counties have much fewer votes.

The fact that President Uhuru and Jubilee worked very hard to demonise Raila is something that can’t be undone with a simple handshake. It has come back to bite them.

This problem is not only historical but it has been repeated so many times that it has become some kind of ideological indoctrination, for mass voter mobilisation.

Even after I left ODM and vied for Ruiru MP in the Jubilee primaries, the voters still said that I ‘smelled’ of ODM. My  yellow posters were profiled as being Orange in colour, meaning that I was still in ODM.

This is what to a considerable extent cost me much-needed support. Any candidate who is seen associating with Raila is most likely going to suffer the same fate at the ballot.

And that's why  those who shout themselves hoarse in boardrooms cannot be seen with him in public. Their policy is anybody but Raila, not because of anything substantive, but they know the repercussions.

A man must try and for Raila, this shall be the fifth stab at the presidency. Let the people decide for ultimately it’s God through their votes who counts.