• Matiang’i announced that the process to grant Kenyan citizenship to eligible but currently stateless persons in the country, will be concluded before this year’s Jamhuri Day celebration.

• He said the government will continue working with international agencies involved in migration to assimilate bonafide individuals. 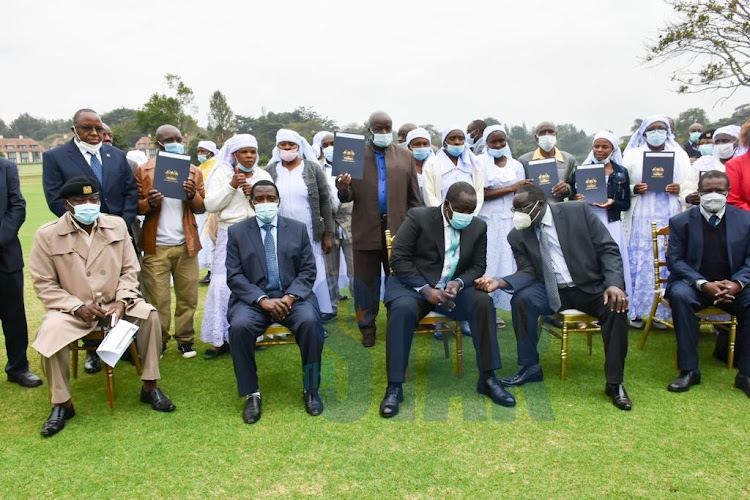 Interior CS Fred Matiang'i during the issuance of citizenship certificates to 1,649 members of the Shona community at the Windsor Hotel in Kiambu County on July 28,2021
Image: MERCY MUMO

The last of stateless people in the country who qualify for Kenyan citizenship will have their status regularized by December this year.

Interior Cabinet Secretary Fred Matiang’i on Wednesday announced the process to grant Kenyan citizenship to eligible but currently stateless persons in the country will be concluded before this year’s Jamhuri Day celebration.

Speaking at the Windsor Hotel in Kiambu County during the issuance of citizenship certificates to 1,649 members of the Shona community, the CS however said the process will be undertaken without compromising national security.

He said although the country was committed to redressing the plight of stateless persons and communities living in the country in line with Human Rights and International Conventions, the process of conferring Kenyan citizenship will be tempered with the larger national security interests.

“We’ve been working on ending statelessness in our country, and I’m very happy about the progress we’ve made. It takes leadership to get to this point. When our president began his tenure in 2013, he determined that he will end stateless in the country during his term. We are well on our way to completing that job,” he said.

The CS further revealed that the Directorate of Immigration Services, the National Registration Bureau (NRB) and the Department of Civil Registration, will confer citizenship on the Sagaf community of Tana River.

The community will be the last batch of stateless persons in the country targeted for the exercise.

Following the promulgation of the Constitution that provided for the State to confer Kenyan citizenship on stateless persons, over 3,000 people have formally acquired local citizenship.

In 2016, 1,496 members of the Makonde community living in Kwale County officially became Kenyans after the government granted them citizenship.

“This is a strong demonstration of how we respect the human rights of our people,” he said, adding that Kenya remains hospitable for all Africans who wish to live and engage in legitimate economic activities in the country.

Matiang’i stated that all individuals will be subjected to rigorous background checks, name by name, and meticulously verified to avoid potential devaluation of the Kenyan citizenship and winnow out criminal aliens from the country.

“We have recently deported several people who obtained identity documents fraudulently, and we will continue cleaning up our systems ruthlessly. Some of them find ways of mingling and interweaving themselves with criminals in our midst, and we have a duty to ensure that our country remains safe and secure,” Matiang'i said.

The intention is to flatten the barriers to adjustment of citizenship status and social integration, and the process is set to be expeditious due to the capacity adjustment in the immigration quality control.

One of the improvements made so far is the simultaneous processing of citizenship certificates and identity cards.

Shona community has been in Kenya since 1959.
InPictures
4 months ago

More than 25,000 applications are pending at the Immigration offices.
News
6 months ago
by CYRUS OMBATI Chief Crime Reporter
News
28 July 2021 - 20:16