Brigadier John Omenda has been promoted to the rank of Maj Gen.

•The president also appointed Ogolla the Vice Chief of the Defence Forces in new postings, promotions and appointments.

•Ogolla replaces LT Franklin Mgalu who has served the forces for 40 years. He had previously served as the commander Kenya Navy. 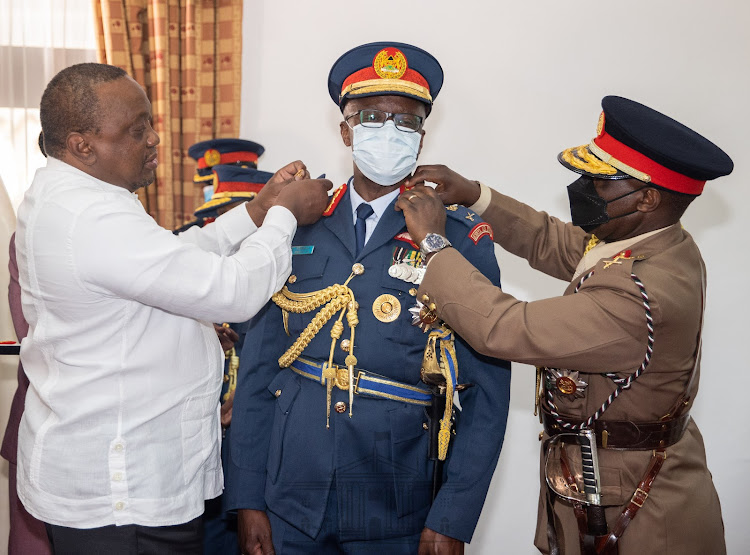 The president also appointed Ogolla the Vice Chief of the Defence Forces in new postings, promotions and appointments.

Ogolla replaces LT Franklin Mgalu who has served the forces for 40 years. He had previously served as the commander Kenya Navy.

The Chief of Defence Forces will remain Gen Robert Kiboch. The new team is likely to oversee the 2022 general elections.

Brigadier John Omenda has also been promoted to the rank of Maj Gen and appointed him Commander Kenya Air Force.

The changes were announced by the president following recommendations by the Defence Council which was chaired by Cabinet Secretary Monica Juma.

The new Kenya Defence Forces spokesperson will be Col Esther Wanjiku to replace Col Zipora Kioko who goes for further studies at Royal college of defence.

The council which is known as Number One Board, the organ that decides changes in the appointment and promotion of senior military and possible retirement or extension of contracts of the Kenya Army, Kenya Navy and Kenya Air Force commanders, met and made the changes.

They briefed president Kenyatta before he made the announcement. The KDF Act says a CDF, his deputy and service commanders shall serve a single term of four years or retire upon attaining the mandatory retirement age.

But the Act also says the President may, on the recommendation of the National Defence Council, extend the CDF’s term for a period not exceeding one year in times of war or emergencies like political uncertainty.

Under the Tonje rules, the position of the CDF is rotated among the three services - Kenya Army, Kenya Air Force and Kenya Navy. The rules, by Retired Chief of General Staff Gen Daudi Tonje, have steered appointments in KDF.

The CDF will oversee the transition from the Kenyatta presidency in 2022. A General is supposed to retire at 62, a Lieutenant-General at 61, a Major-General at 59 and a Brigadier at 57 years.

However, the law puts a disclaimer on the General that: “The maximum retirement age shall be amended from time to time through legislation on the recommendation by the Defence Council.”