•The case came up for hearing before presiding judge Asike Makhandia and justices Mumbi Ngugi and Agnes Murgor.

• However, Judges Makandia and Ngugi recused themselves. Next hearing July 27, two days before expiry of latest extension. 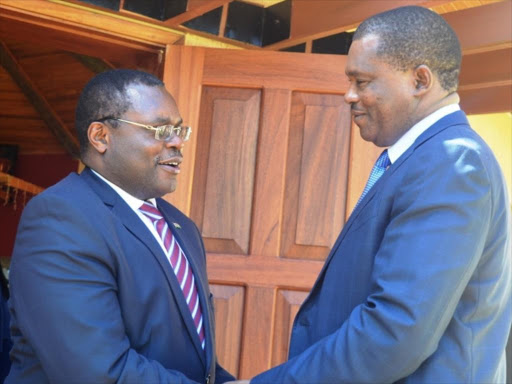 With only eight days before the judgment takes effect, the National Assembly pleaded unsuccessfully with the Court of Appeal to give them more time.

Without a third stay there would be chaos, its legal team claimed.

On October 29 last year, a three-judge bench declared 23 laws illegal but suspended their judgment for nine months that end on July 29.

The laws were declared illegal because the Senate was not included and its input was not sought before the Assembly passed the bills into law. It affirmed the Senate's role in legislation.

On Wednesday, the case was coming up for hearing before presiding judge Asike Makhandia and justices Mumbi Ngugi and Agnes Murgor.

In a short ruling, judge Ngugi said they had agreed to place the matter before another bench.

“The matter is accordingly taken out of the hearing list for today (Wednesday) and shall be placed for hearing before a different bench on  July 27.

Judge Mumbi said  since the matter will be heard on July 27 the conservatory orders sought do not arise at this stage.

The new bench will exclude justice Makhandia and Mumbi Ngugi,” the court ruled.

Makandia and Ngugi had recused themselves.

Justice Ngugi said she had handled the matter at one point when she was still at the High Court before being elevated to the Court of Appeal.

“Much as you have indicated you are ready to proceed, unfortunately we might not be able to proceed as I am known to the speakers of both houses and it will be quite uncomfortable for me to hear this matter,” Makhandia said.

Justice Makhandia was the presiding judge in the matter coming up for hearing Wednesday and was being assisted by Justices Mumbi Ngugi and Agnes Murgor.

The judge said it was unfortunate he did communicate this earlier but the files only came through on Tuesday evening and when he was going through them, he realised that it would not be ideal to preside over the matter.

“I don’t want a situation [in which] somebody can come up saying these people are friends or something like that, I am trying to avoid such a situation,” he said.

Lawyer Paul Muite for the National Assembly said they did not oppose the recusal but said the matter is urgent because the nine months' stay issued by the High Court ends in the next eight days.

When the high court nullified the laws, it suspended the judgment for nine months so issues can be rectified.

“There is a long list of statutes that were declared unconstitutional, meaning at the end of nine months which expires on July 29 all of them will be illegal,” Muite said.

He told the court that the impugned statutes include the Finance Act 2018-19 and the Appropriation Act.

“If there are no stay orders, come July 29, even the judiciary will have to look for ways to refund the money appropriated and already spent,” Muite said.

He asked the court to extend the nine-month stay so the statuts remain valid until appeals are heard.

“Otherwise the appeals could be rendered nugatory [meaningless]. In fact, there will be total anarchy and chaos if these statutes become a nullity,” Muite said.

However, Senator James Orengo representing the Senate strongly opposed the application for orders by the National Assembly, saying it has failed to implement the orders issued by the court.

“Quite a number of the statutes that were invalidated come up annually, for example, the Appropriation Act. In this [ruling] there are several supplementary appropriation acts,” Orengo said.

The court had directed the National Assembly and the Senate to hold consultations as necessary in the public interest to move forward with the business and mandates of each house.

Lawyer Ochiel Dudley for the Katiba Institute also opposed the application for a stay orders, saying this was the third time they were asking for a stay.

Ochiel argued issuing a stay would mean the assembly can continue in its conduct of unilaterally passing legislation.

“When you issue the stay it means that the National Assembly and Senate do not have to consult on the nature of bills,” Ochiel said.

In his view, there was suspended invalidity for nine months because the High Court considered the public interest of the impact of an abrupt disruption of business.

Emmanuel Biita for the Attorney General asked for the stay, saying if not granted, their appeal would be rendered nugatory, thus the status quo should remain.