They said the final stage includes the pursuit of financial accountability and settlement.

• The three leaders have been at loggerheads with ODM boss Raila Odinga, a partner in the coalition over the political parties’ funds. 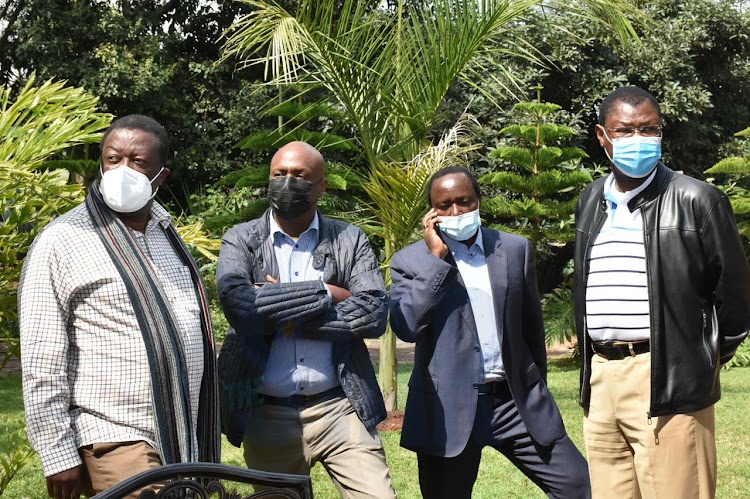 One party alliance leaders Musali Mudavadi, Gideon Moi, Kalonzo Musyoka and Moses Wetangula during a press conference on their commitment to the party at Hamosa gardens Karen on 20 July 2021.
Image: MERCY MUMO

Three Nasa principles have termed the moribund coalition as part of their history in yet another clear indication they will not revive the opposition alliance.

Moses Wetangula (Ford Kenya), Musalia Mudavadi (ANC), and Kalonzo Musyoka (Wiper) said that all that remains is the formal disbandment of the coalition.

“As far as we are concerned, NASA is part of our political history,” the leaders said in a statement on Tuesday.

In the statement read out by Makueni Senator Mutula Kilonzo Junior after hours of closed-door meetings, they said they are in the final process of drilling the last nail on the coalition’s coffin.

The final stage, they said, includes the pursuit of financial accountability and settlement.

The three leaders have been at loggerheads with ODM boss Raila Odinga, a partner in the coalition over the political parties’ funds.

ODM has declined to share its windfall with the affiliate saying the coalition agreement they signed does not stipulate sharing of the funds due to the party.

The leaders said they have moved on and are keen to form a new alliance – One Kenya Alliance – ahead of the epic 2022 polls.

“We, Ford Kenya, Wiper, and Amani National Congress wish to re-affirm our irreversible commitment to One Kenya Alliance with Kanu and any other like-minded Kenyans,” they said.

There have been efforts to revive and rejuvenate Nasa to take on Deputy President William Ruto in the 2022 polls.