• The exercise done on Monday showed the 64-year-old woman was hit in the head three times and three times in the upper limbs.

• The shooting happened at close range. 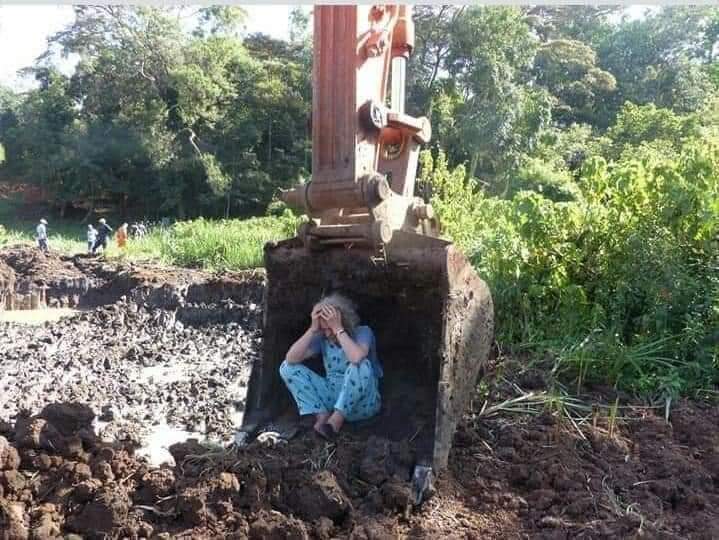 Stutchbury sitting in the scoop of a digger to protect a swamp in Karura Forest from a developer
Image: FILE

An autopsy on the body of conservationist Joannah Stutchbury revealed she was shot six times in the head and upper limbs.

The exercise done on Monday showed the 64-year-old woman was hit in the head three times and three times in the upper limbs.

The shooting happened at close range.

The post mortem conducted by Chief government pathologist Johansen Oduor showed bullet wounds on her upper limbs indicated that she tried to fight off her killers.

She also had bruises.

Stutchbury was attacked on July 15, about 150 metres from her home in Mushroom Gardens Estate, Kiambu County as she returned from lunch, witnesses said.

Nothing was stolen from her.

The autopsy showed two of the bullets hit her left upper limb and one her right hand.

Oduor said the presence of gun powder deposits on her flesh, which is known as tattooing, showed the shooting was at close range and the gun used was a pistol.

She suffered a fractured skull, and a bullet track was found in the brain.

According to the autopsy, she also had a fractured jaw and a few missing teeth on her right jaw.

In 2018, Stutchbury single-handedly stopped a group that wanted to re-channel a wetland by creating an access road to Kiambu forest.

She and the Kenya Forest Service were taken to court by individuals who claimed they owned land in Kiambu Forest, which borders her home.

Her photo, while seated on the bucket of an excavator that had been brought to clear the wetland, went viral, forcing the alleged land grabbers to abandon their mission.

Joannah was a third-generation Kenyan. Her grandfather was one of the founders of the Muthaiga Club.
News
2 weeks ago

On Friday, President Uhuru Kenyatta condemned the killing of the environmentalist and ordered security agencies to track down the perpetrators.

In his message of condolence to the family, relatives and friends, the president said his administration greatly appreciates the contribution of Stuchburry in conserving the environment.

“It is very sad, unfortunate and regrettable that bad people have senselessly taken away the life of Joanna Stuchburry in such a senseless manner."

"For the longest time, Joanna has been a steadfast champion for the conservation of our environment and is remembered for her relentless efforts to protect Kiambu forest from encroachment."

A virtual memorial service to celebrate the life of Stutchbury, organised by her family and fellow conservationists, is scheduled for Tuesday from 6pm, officials said.

Those attending the virtual meeting have been asked to wear green and hold a candle.

Police said no arrest had been made and added they are pursuing good leads.

Among the leads include claims the woman had been threatened by people who wanted to grab land in the area.

Some conservationists have said her execution was occasioned by her firm stand against excision of Kiambu forest by private developers.

She was always threatened by grabbers out to grab the land.