The drive to serve: Gladys Wanga is a chip off the old block

Homa Bay woman rep says activism and fighting for justice and fairness naturally occur in her.

• Among them fighting to be ODM chairperson in Homa Bay, which she says was male-dominated and being chairperson of the Finance and Planning committee. 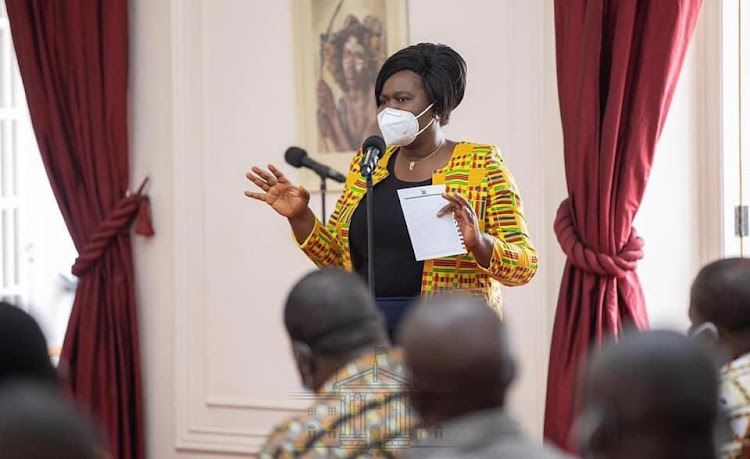 Homa Bay Woman Representative Gladys Wanga speaks during a meeting between President Uhuru Kenyatta and elected leaders from the Luo Nyanza region at State House, Nairobi on May 28, 2021.
Image: PSCU

During the 2017 post-election standoff, Wanga sat next to the ODM leader as they announced the formation of the National Resistance Movement and flaunted their military-like uniforms—a jungle green cap branded with a fist and emblazoned with the word 'resistance'.

“We (NRM) will resist an illegitimate government rejected by over 70% of Kenyans in a sham charade,” she tweeted at the time.

She says she is not one to stand by and watch injustice permeate the social fabric of society.

“In our politics, when we were fighting as Cord and Nasa, I was always in the frontline fighting against the injustices that were meted out to us. My voice was always there. I cannot be second-guessed; I speak my mind the way I see it. I'm consistent and can be predicted, and that’s the brand of politics I am building,” she said.

The second-term legislator is now putting her best foot forward in the Homa Bay governorship race.

In this position, Wanga, 40, says she is seeking to use devolved resources to improve the lives of the people and develop the county.

“As a younger person, I believe I have an opportunity to create a legacy, not one that I leave but one that I live, in the sense that when I do wrong, I live so many years to see the wrong, and when I do right, I live to see the good I would have done,” Wanga said on Thursday.

The Star caught up with her on the sidelines of a meeting of the National Assembly Departmental Committee on Finance and National Planning, which she chairs.

She is the first woman to chair the committee. Wanga is married and has two children—a boy and a girl.

She believes the woman rep position is living up to its objective and to her growth in politics because it was meant to give women a platform to jump-start their politics, a feat it is achieving.

“We came through affirmative action; we have used it to grow – from drinking milk and now ready to eat bones. Without it, it would have been a difficult breakthrough because of the sheer competition in politics,” she says.

She says she is now ready for governorship, citing a Luo saying that "you don’t dry yourself where you bathe".

She, too, wants to dry herself elsewhere “with a view that if I do well in the 10 years as governor, I will be able to return to the national level and do more”.

She is not scared of entering what has been described as a male-dominated field as she has fought many battles and won, among them fighting to be chairperson of the Finance and Planning committee and to be ODM chairperson in Homa Bay, a contest she says was male-dominated.

This was in reference to the ODM leadership clash in Homa Bay that pitted her faction against that led by Homa Bay Town MP Opondo Kaluma.

In the governor race, she will face off against former Nairobi Governor Evans Kidero, former Kasipul MP Oyugi Magwanga, and ODM chairman John Mbadi, among other hopefuls.

She says it will be a battle royal but adds that she is ahead of the game and only prays for God’s grace and favour. It’s hers to lose, the lawmaker quips. The incumbent, Governor Cyprian Awiti, is serving his second and final term.

Wanga comes from a political family. Her father, John Nyasuna, was a councillor and chairman of the now-defunct Kisumu County Council. Her brother, Habil Nyasuna (Masogo-Nyang'oma), is a member of the Kisumu county assembly and chairs the Committee on Implementation.

Wanga says she got involved in politics at the early age of five, or thereabouts when she would help in distributing 'salt' to villagers during his father's election campaigns. She would also accompany her father to political functions and meetings.

Nyasuna was a firm believer in education, she says, and so he enrolled his children at Aga Khan Primary School in Kisumu, one of the premier elementary institutions in the lakeside city.

Wanga proceeded to Kisumu Girls’ High School where she served as head girl. There, her political nails started developing.

Her advocacy for the rights of prefects led to her expulsion when she was in Form 3. She, however, successfully appealed against the decision and was readmitted the following year.

She proceeded to Form 4, despite not having completed the Form 3 syllabus.

She scored a B+ in her KCSE exam and secured a slot at Kenyatta University in 2000, where she studied Bachelor of Science in Appropriate Technology and graduated in 2004.

She was elected by fellow students to serve as the first female secretary general of Kenyatta University Students Association.

Wanga returned to KU for a Master of Science in Health Management. She also holds a diploma in project management from the Kenya Institute of Management.

She says politics and leadership are an integral part of her life.

“Fighting for justice and fairness, that sort of activism is naturally occurring in me. So leadership is not something that I am pushed into or think about. It is in me,” she says.

“I want to leave a mark at two levels. On the ground, I want to drive certain legacy projects for the people who voted for me, especially financial empowerment for women.

"We started by starting a women’s Sacco and ensuring women at the lowest level are empowered. So I would want to leave a mark in development and ensure that I put money in people’s pockets.”

At the national level, she wants to be remembered as the voice of the voiceless and the downtrodden, fighting for fairness and justice, as well as advancing democracy.

And whether you call it sycophancy, Wanga says she is loyal to ODM and  Raila, following in the footsteps of her former senator, the late Otieno Kajwang', alias Mapambano.

“It can’t be that the party leader is going into this direction and you’re going in another direction. A political formation is like that of war. You have a captain because you are in a battle to capture power.

"You can disagree with the captain in private but it is not in your place to do so in public. Once a decision is taken after discussions or a direction is given, then that’s the route to take, even if you didn’t agree,” she adds.

She maintains that she is Raila's political protégé and shares in his fervency for social democracy, a cause she describes as the way forward in promoting development and realising a just society.

Before joining active politics, Wanga served as a programmes manager at both the Kenyan Trust for African Rock Art and the Liverpool VCT Care and Treatment.