• Most of them are products of political directives as their establishment was not backed by proper planning.

• The result was higher learning institutions that lacked some of the requisites. 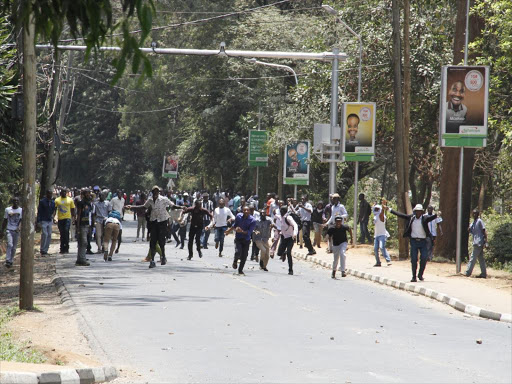 About a week ago, the University of Nairobi announced radical changes to its management.

The reforms have been received with mixed reactions and a section of students have since held protests against fee hikes, saying some of them may drop out because of financial problems and many others will be locked out of university education.

Historically, the UoN played a pivotal role in the expansion and growth of university education in the country.

Following the failed 1982 coup by a section of the Air Force soldiers, the government was concerned about the popular support the mutiny enjoyed among university students. The UoN was the sole university in Kenya at the time.

The country had been treated to frequent student strikes and the rising influence of dons on the country's politics, hence the Internal Monetary Fund, in an advisory, warned that the situation was dangerous and needed to be controlled.

In reaction, the government ordered an indefinite closure of the university. It lasted for about a year and what followed was a restructuring to end the monopoly that the UoN enjoyed.

A 1984 Presidential Working Party on Education and Manpower Training (Kamunge Report) recommended that the university be structurally 'disintegrated' into colleges to cater to the growth in demand for university education.

This was occasioned by the high number of students who were to join university by the end of 1982 but could not be selected for admission in the 1983-84 academic year following the closure.

The 'disintegration' was also meant to end the student unification that had been responsible for frequent strikes and demonstrations.

Besides the large enrolment of students and demonstrations, the pervasive influence of Marxism was a cause for concern within the government circles.

Therefore, President Daniel arap Moi, then UoN chancellor, appointed college principals who yielded as much power as the vice-chancellor, with some of them openly disagreeing with the VC.

In 1984, Moi University, through an Act of Parliament, was established as the second public university.

Kenyatta, which had been a constituent college of the UoN for some years, became autonomous the following year, with the enactment of the Kenyatta University Act.

In 1986, Egerton College became a constituent college of the University of Nairobi. It became a fully fledged university the following year.

In late 1988, Parliament made the Jomo Kenyatta College of Agriculture and Technology a constituent college of Kenyatta University.

Prof David Some, the former chief executive of the Commission for University Education, says a number of factors combined to determine the location and upgrading of the institutions.

He argues that most of them were products of political directives as their establishment was not backed by proper planning.

"The factors leading to the upgrading of institutions include the public demanding, through their leaders' petitions to the President, the opening of a university or university college in their region," Some said.

The result was higher learning institutions that lacked some of the requisites.

The scramble for such programmes lasted a little more than a decade in the period between 2004 and 2016. This saw an astronomical increase in the number of university courses, colleges, and campuses.

Records show, for instance, that the University of Nairobi Council approved more than 100 courses—twice as many courses that had been started since its inception.

Faculties also grew in a bid to have self-management, which meant an increase in the wage bill. This, however, was not a problem as they had enough money from the parallel programmes to take care of everything, though the quest for self-management became a burden.

The reforms by the Kenya National Examination Council in 2016 struck a blow at parallel programmes, with their target cohort of KCSE candidates significantly reduced after the government opted to sponsor every student with at least the minimum university grade of C+.

In its latest reforms, the UoN has cut the faculties from 35 to 11. Some education sector players say it is a bold step but warn that it is just the tip of the iceberg. They argue that the institution is only scratching the surface of its deep-rooted troubles.

But this is not just a UoN problem. It is prevalent in all other public universities. Financial stability and governance structures have crippled their development and day-to-day activities.

UoN vice chancellor Stephen Kiama, in an online address to the university, says changes in the administrative structure are necessary to achieve sustainability.

He says the current situation is like a 1980 toolbox being used today, despite some of its contents being obsolete, hence warranting replacement or upgrade.

The idea of universities being autonomous is still far from actualisation as there is too much government involvement in their affairs from formation, governance, and financing.

In the period before 2003, the President of Kenya was the chancellor of all public universities and had the power to appoint and dismiss vice-chancellors. This ended with the assumption of power by President Mwai Kikabi.

During the past decade, the public university has system undergone significant growth in terms of the student population but that has not been accompanied by commensurate funding.

Programmes remain underfunded both by the government and the direct fees paid by learners. The government has not revised funding since 1980, with students it sponsors paying only Sh16,000.

"A university should charge as much as it requires to produce a quality graduate,” UoN lecturer George Omondi says.

Efforts by vice chancellors to increase fees have yet to be approved. They have proposed Sh48,000.

“The government seems to be viewing the much-needed university reforms from a political lens and the result is a serious decline in the quality of education in public universities,” Omondi adds.

Due to the financial challenges, universities also suffer an acute shortage of facilities and academic personnel. The University and Academic Staff Union, however, says managements are dishonest in their reform agenda, citing unrealistic staffing norms.

Uasu secretary general Constantine Wasonga argues that the institutions are bloated with support staff but have an acute shortage of teaching personnel.

A study conducted by the head of the Kenya National Qualification Framework Authority, Juma Mukhwana, showed that all universities had more non-teaching staff than teaching staff—employed on permanent and pensionable terms.

A section of stakeholders is of the view that the best option is to retire the support staff and instead outsource non-teaching services such as cleaning and security.

“The core mandate of a university is teaching and research, so when the university human resource is bloated by support staff, then we need to relook at it,” said Prof Some, whose term as Moi University vice chancellor ended in 2006.

He adds, however, that the universities are on the horns of a dilemma as the amount required to send the non-teaching staff home is too high for them to afford.

"Not unless there is a government bailout, the institutions cannot afford to retrench the support staff as suggested by some stakeholders,” Some said.