"Kenyans are poor and will tend to vote for politicians who give the most handouts." 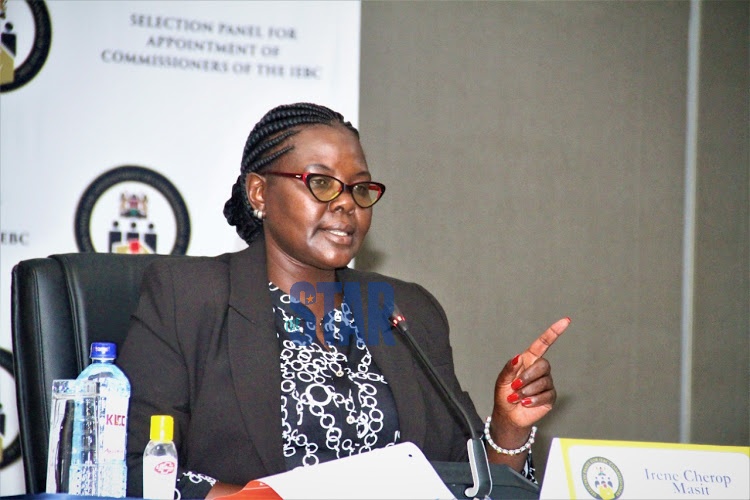 IEBC candidate Irene Cherop before the selection panel for appointment of IEBC commissioners at KICC on July 13, 2021.
Image: EZEKIEL AMING'A

Kenyans will keep electing wrong leaders if campaign financing is not checked, the panel for the selection of nominees for the appointment of members of the IEBC heard.

Irene Cherop pointed out to the panel on Tuesday that she dropped out of the race for the woman representative seat in 2017 in Elgeyo Marakwet since she could not match the amounts of money her rivals had for campaigns.

She said the culture of handouts is deeply entrenched and is a big challenge to a fair electoral process.

Cherop, currently working as an independent director at the National Government CDF board pointed out that most Kenyans are poor and will tend to vote for politicians who give the most handouts.

“It was not just about handouts but one needed a lot of money to move around with people and feed them at the same time. At the end of the day, you were also expected to give them allowances,” she explained.

She added that sometimes, the money is not given out as bribery but as inducement.

“You need at least Sh100 million to campaign for women representative seat in rural areas. I had so little money, an amount I cannot tell this panel,” she added.

In the last General Election, IEBC sought to cap spending for campaigns in a bid to control high spenders who deploy wealth to tilt the playing field.

The rules were to ensure that no political party or candidate enjoys an undue advantage over rivals on the basis of their financial muscle.

Candidates for the gubernatorial, senatorial and Woman Rep seats in Nairobi were not to spend more than Sh432 million each.

Financing for those who will be seeking parliamentary seats was limited at Sh33 million while presidential candidates were limited to no more than Sh5.2 billion.

On Tuesday, Cherop said regulations need to be put in place to check campaign financing.

“Most people who take up elective positions don’t go to the ground to get to know the issues. They know they have the money and wait three months to elections then they hit the ground with millions of shillings and sweep everything,” she stated.

She added: “People people will not see the money and let it pass. Regulations are needed to curb this culture. We also need a whistleblower policy to protect witnesses. There should also be a code of conduct for all aspirants”

Cherop reminded Kenyans that leaders who give handouts will not serve them once they get to office.

Cherop said she tried to report bribery incidences to relevant bodies during the 2017 polls but with no success.

“I reported cases to ground officers but nobody wanted to be a witness. Others asked me why I had a problem with aspirants giving them money yet I had nothing for them,” she added.

She further said parties should strive to ensure they have free and fair nominations.

“We should have credible nominations. Violence starts from there,” she added.

Cherop, who undertook her oral interviews on Tuesday, is among 36 candidates who were shortlisted to fill four vacant positions at IEBC.

IEBC has been operating with only three commissioners out of the maximum seven.

The chairman Wafula Chebukati has been sitting with only two other commissioners Boya Molu and Abdi Guliye.