“I am an independent person and my current affiliation to the ANC party will not interfere with my work."

•Facing the selection panel recruiting IEBC commissioners, Chiggai said that as a commissioner it is important to sit in the pedestal of non partisan.

•“I am an independent person and my current affiliation to the ANC party will not interfere with my work when given the opportunity. The  job at hand is a job of duty. The moment you are given the duty you delink yourself,” she said. 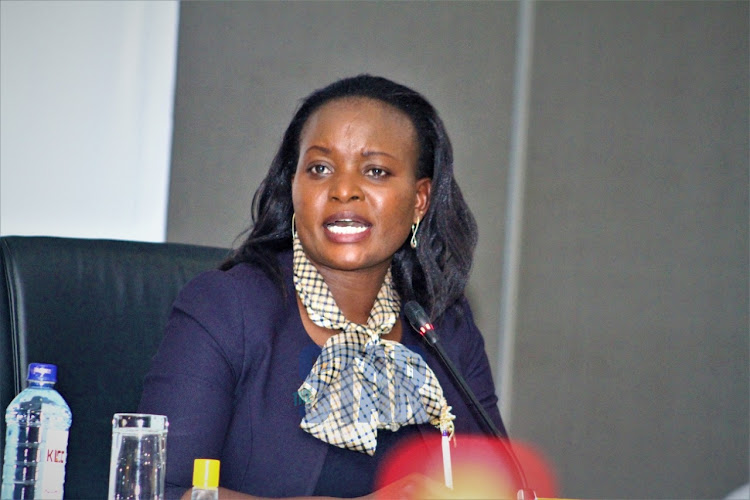 IEBC nominee Harriet Chigai before the selection panel for appointment of commissioners of IEBC for interview at KICC on July.12th.2021EZEKIEL AMING'A

Lawyer Harriette Chiggai was on Monday taken to task on how she would delink her work for ANC party from the IEBC commissioner job should she make the final cut.

Facing the selection panel recruiting IEBC commissioners, Chiggai said that as a commissioner it is important to be nonpartisan.

“I am an independent person and my current affiliation to the ANC party will not interfere with my work when given the opportunity. The  job at hand is a job of duty. The moment you are given the duty you delink yourself,” she said.

“When the time comes, I am not partisan but there to do my work. Some of these spaces I have had are the reason why some of us are here. Not because of the party we support.”

Chiggai said she wanted her conduct to be checked not because she serves a party but because she has served well.

“…and my track record sells itself. There is a lot of written and signed by all the institutions I have worked in and I would wish Kenyans to test me by ensuring that I capture this seat,” she said revealing she is chair Internal Dispute Resolution at ANC party.

“I didn’t see where there was conflict by virtue that I’m coming for this interview not unless it’s an issue that will impact on my job because given this opportunity it's something I will relinquish.”

She further noted that security during elections is a big risk that needs to be looked into.

“IEBC can work with stakeholders like the NIS, the police, the ministry to ensure that the security of employees and the people are taken care of,” she said.

“Security when it comes to women.. how prepared are they ? This is one area that we need regulations, engagement with the state actors to ensure that security of staff is guaranteed.”

On challenges as a leader, Chiggai said she has not had any integrity issue in places where she has worked.

“I  have not had any issue unless they come.. I come highly recommended from the institutions I have worked in,” she said.

She noted that good leaders need to be trained and coached properly before taking up positions.

“There is a lot of hate speech.. at times it is good to coach and bring out a leadership that coaches the younger generation.. what can commissioner can do to ensure to curb this. This starts with the political parties,” she said.

“Campaign financing, most women and youth have money problems.. this need training of the electorates..when you feel your vote you sell your birthright. All leaders should embrace. When we encourage voter bribery we encourage poverty.”

Chiggai is a former Vice President of the Law Society of Kenya.

She said IEBC could have in place measures to guarantee credible elections but politicians with selfish interests could erode all gains achieved in no time.

“There is usually a lot of interference from the political class in the running of IEBC. Politicians are the same people who incite voters to turn against each other during elections,” she said.

She added that the political class should learn to accept defeat when they are floored in elections.

“It is good for leaders to accept that they did not win. These are areas that we need to mould through various engagements,” she stated.

Chiggai added that she would engage relevant government agencies to fight electoral malpractices if she given the opportunity to serve as commissioner.

“I will seek a partnership with the National Police Service and any other relevant agency to curb any electoral malpractices,” she said.

Chiggai noted that politicians are also the people who determine the amount of funding for electoral agency. She promised to lobby for IEBC to get more funding to run its activities.

“I would strive to ensure Parliament has a better budget for IEBC for it to run activities over five years,” stated.

Chiggai added that she would reach out to development partners to get support to run activities like training of staff and capacity building.

She added that the appointment of commissioners should be staggered.

“Appointments to the commission should be staggered for institutional memory. Also, when commissioners are appointed at the same time, they could all leave at once,” she explained.

Chiggai struggled to understand and answer a question posed by a member of the interview panel in Kiswahili.

Earlier, A candidate for a position at the electoral agency found herself on the spot when she was asked to illustrate how she would communicate to voters in Swahili.

Florence Jaoko struggled to make complete Swahili sentences when the panel asked her to demonstrate how she would explain her roles to voters who don’t speak English.

Jaoko had appeared before the Selection Panel for the Appointment of Commissioners of the Independent Electoral and Boundaries Commission for the oral interviews.

Rev. Joseph Ngumbi, a member of the panel, had pointed out that Jaoko would at some point be required to go to the grassroots to talk to voters.

Jaoko said Swahili was not given much attention during her days in primary school.
News
4 months ago
by NANCY AGUTU AND ALLAN KISIA
News
12 July 2021 - 16:07