Muturi to be made Maasai elder as national tour begins

Ceremony to be hosted in Narok South this Saturday.

•Muturi is keen on tapping on his network of MPs, banking on the working relationships he has built with them for the years he’s been at the helm. 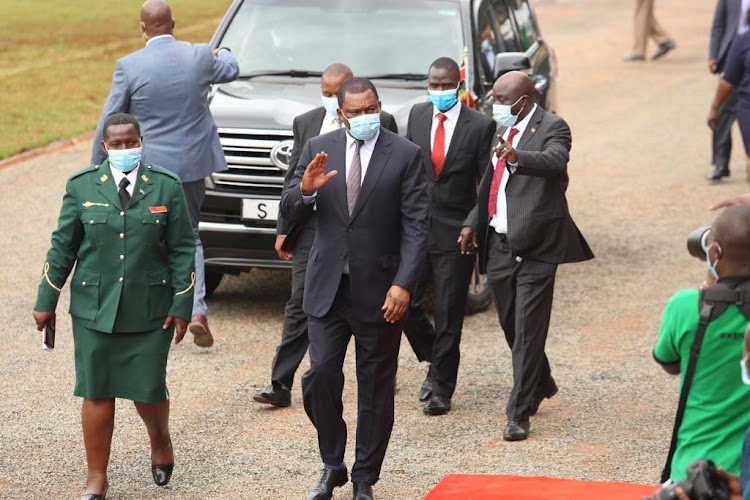 National Assembly Speaker Justin Muturi has lined up a series of tours in nine counties to bolster his message of unity ahead of 2022.

The Speaker is scheduled to undertake various activities in Narok, Nyandarua, Siaya, Migori, Bungoma, Nakuru, Uasin Gishu, Vihiga, and Lamu in the next two months.

Muturi is keen on tapping on his network of MPs, banking on the working relationships he has built with them for the years he’s been at the helm.

This weekend, the Speaker will be in Narok where leaders have planned among other activities to recognise him as a Maasai elder.

Nominated MP David Sankok let the cat out of the bag when he said: “You are not only the spokesman of Mt Kenya but the whole country.”

“You have just travelled from Wajir and I am sure you will be in Narok on July 3 and we are going to crown you a Maasai elder,” Sankok said.

The Narok tour comes hot on the heels of engagements in Wajir, North Eastern where Muturi was hosted by 20 MPs led by Wajir South lawmaker Mohamud Sheikh Omaar.

Omaar said the Speaker's visit will yield fruits in his ascent to the next level.

Wajir West MP Ahmed Kolosh said: “He has served as National Assembly Speaker for two terms. He has to seek a higher seat. We will be with him wherever he goes because of the respect he accorded to us.”

His Wajir East counterpart Rashid Amin said: “We will support him. By visiting us, it showed that he is acceptable to the people of Kenya beyond the Mt Kenya region.”

The organisers say that meetings have been planned to alternate with activities in Mt Kenya in line of his assignment as the region’s spokesman.

There is also a planned tour of Nyandarua after Kajiado and later a return to Mt Kenya for more engagements with area leaders.

The Star understands that Muturi has been invited to address all MPs from Mt Kenya - from across the political divide - next month.

The organisers of the event whose details remain scant see the Speaker as a uniting factor and are urging him to unite the region ahead of 2022.

There are rumbles in the mountain in the face of the heat generated by President Uhuru Kenyatta’s succession politics.

After the Mt Kenya event, the Speaker will tour one of the constituencies in Migori, subject to lifting of Covid-19 restrictions in the region.

The MP set to host the Speaker told the Star in confidence: “The Speaker is third in command, and has been very objective on that seat…we will be welcoming him to our region because he is a national leader.”

He will then head to Siaya in the first week of August in honour of an invitation by an area MP for a harambee in aid of several women's groups.

According to the tentative itinerary, Muturi would in the same month hold activities in Vihiga before heading to Bungoma in efforts to woo the Western region to support his 2022 bid.

Dates for Nakuru tour are yet to be set but plans to host him are already underway.

Tours of Uasin Gishu and Samburu counties are also in the pipeline, the trips are fashioned around Muturi’s desire to ‘escalate the message of unity nationally.’

The gist of the tours is to persuade minority communities to rally behind his bid, on the auspices that he also hails from the Mbeere – a minority group in Mt Kenya.

According to his handlers, the point is to rally the marginalised and a nexus under the mantra of, “Your problems are ours.”

The Star understands the Speaker will be making inroads in other county in a more rigorous schedule from August to October.

Gema on the rocks: Meru-Embu elders unhappy with anti-Muturi rhetoric

They say the cleansing of shrine after Muturi coronation is an insult to them after years of loyalty to the Kikuyu.
News
3 months ago
by MOSES ODHIAMBO Political Writer
News
30 June 2021 - 23:00