•More people are getting into drug use during the containment period while many others have progressed to substance use disorders. 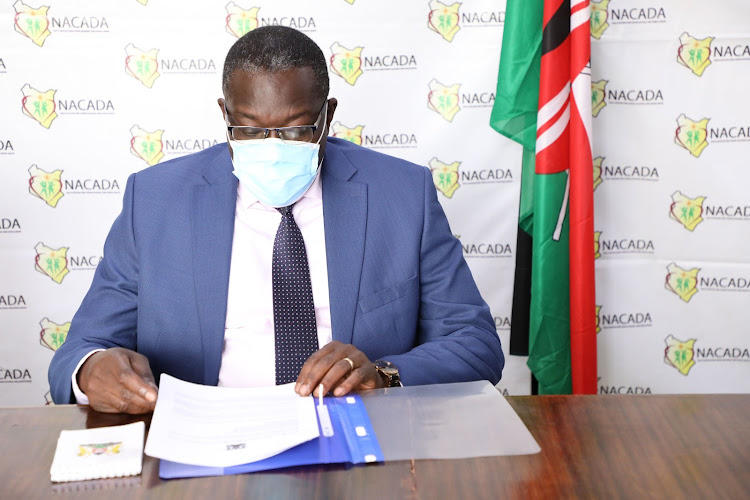 JUST SAY NO: Paul Famba, administrator in the Ministry of Interior and Coordination of National Government representing the PS Interior Karanja Kibicho, during the marking of of the International Day Against Drug Abuse and illicit trafficking on June 26.
Image: MAGDALINE SAYA

As the number of drug users and abusers rise, so does the need for treatment, support and eventual reintegration in society.

Now, more than ever as Covid-19 ravages the globe, increasing stress, depression and desperation lead to substance use and abuse.

National anti-drugs officials are working with the Kenya Bureau of Standards to formulate standards in the management of drug addiction.

The Interior ministry and National Campaign Against Drug Abuse and Alcoholism (Nacada) are alarmed at the increase in substance abuse, exacerbated by the Covid-19 pandemic.

Interior PS Karanja Kibicho said Covid has compounded the situation through increased stress levels. More people are getting into drug use during the containment period while many others have progressed to substance use disorders.

He spoke on Saturday during the International Day Against Drug Abuse and illicit trafficking.

Kibicho has called on counties to support law enforcement agencies in carrying out regular enforcement.

“I appeal to the county governments to use funds collected from liquor licensing to support prevention programmes and to put up treatment and rehabilitation facilities for prevention, control and mitigation,” he added.

Nacada board chair Prof Mabel Imbuga noted that the agency has supported 10 counties in establishing county-based treatment and rehabilitation centres.

“Though much has been achieved, the challenge of alcohol and drug abuse is huge and a lot of work remains to be done. There is an upsurge of online sale of substances which further exposes young people to the risk of drug use as there is ease of access,” Imbuga said.

“The Covid-19 pandemic has also worsened the drug situation as we have witnessed increased incidences of drug abuse particularly in homes in the presence of children,” the chairperson added.

For instance, the Life Skills Programme which has been piloted in over 84 primary schools has empowered young pupils with knowledge on alcohol and drugs and also elicited good debate on drug use amongst pupils and teachers.

“In addition, implementation of the Workplace Prevention Programme continues to assist public sector organisations design and implement preventive and mitigative programmes on alcohol and drug abuse for their staff and families.”

According to the World Drug Report published by the UN Office on Drugs and Crime,about 269 million people, which translates to about 5.3 per cent of the global population aged 15 to 64 years, have used drugs at least once.

Of these, 35.6 million suffer from drug use disorders thereby, increasing the disease burden. In 2009, the number of persons who have used drugs at least once in their lifetime was 210 million.

A national Survey conducted by Nacada in 2017 found that alcohol is the most abused substance, with 12.2 per cent of persons aged 15  to 65 being active users of alcohol.

This is followed by tobacco with a prevalence rate of 8.3 per cent, miraa at 4.1 per cent and cannabis at one per cent.

Another survey by the agency in 2016 on the drugs  in secondary schools showed that 23.4 per cent of the students had ever used alcohol, 17 per cent miraa, 16.1 per cent  prescription drugs.