• Adverse effects of the closure, the report indicates, saw 165,000 adolescent girls aged between 10 and 19 either married or impregnated.

• 250,000 of those who dropped out were girls, making them the most affected. 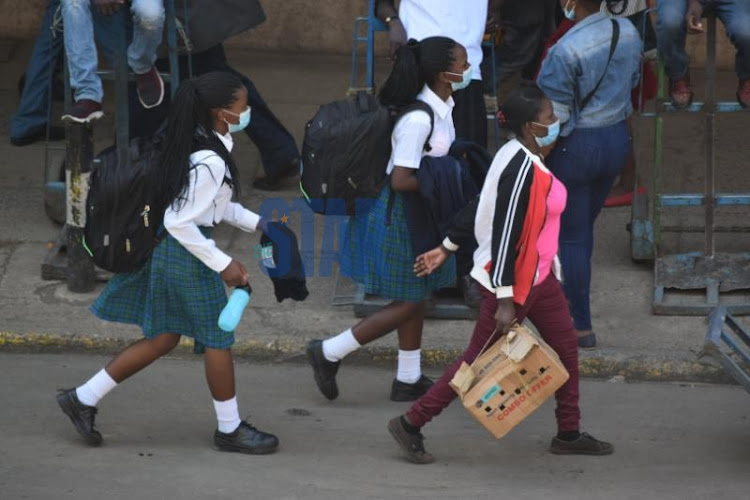 The shutting of learning institutions in March last year to stem the spread of Covid-19 fuelled the dropping out of over 375,000 learners in primary and secondary schools, a report commissioned by President Uhuru Kenyatta shows.

The grim figures are contained in a study yet to be released titled ‘Promises to keep: Impact of Covid-19 on adolescents’.

Ruth Kagia, the Deputy Chief of Staff in the Office of the President, quoting the report said about 250,000 of those who dropped out were girls, making them the most affected.

Boys accounted for about 125,000 of those who did not return to school.

Adverse effects of the closure, the report indicates, saw 165,000 adolescent girls aged between 10 and 19 either married or impregnated.

The report was commissioned by President Uhuru Kenyatta and sought to assess the impact of Covid-19 on the education sector.

“Rate of pregnancies went up, they also fell in the risk of substance abuse and access to unregulated information through the phones. That is why opening schools in essence is the first step because it provides safe and regulated space,” Kagia said.

She spoke during the launch of Commitment to Education Financing and outlined the country’s role as the co-host of the Global Partnership for Education 2021-2025 in Nairobi.

Schools closed in March 2020 for nine months with transition classes of Grade 4, Class 8 and Form 4 reporting back in October while the rest of the classes reported in January this year.

The impact of the closure was first seen during the administration of the KCPE examination that saw 12,424 candidates miss the exams.

The revelation was made by Education CS George Magoha while releasing the 2020 KCPE results.

Covid doubled the number of candidates who missed their exams in 2019. In the KCSE exam, a similar trend was witnessed after a record 5,441 missed the tests.

The lead author of the report, Julie Mwabe, the gender advisor at the Presidential Policy and Strategic Unit, said the report will further show the impact on mental health suffered by children during the shutdown period.

Kagia said in future, lessons picked from the closure of schools will be used to ensure minimal disruptions in both education and personal wellbeing of the learners.

“We cannot predict the future, all we can say is that we will take lessons that we have learnt to make sure less disruption is witnessed in that we will be better organised in protecting the children, working more closely with the community and with parents,” Kagia said.

Over a period of three months in lockdown due to Covid-19, 152,000 teenage girls became pregnant—a 40 per cent increase in the country's monthly average.

These numbers, from early July 2020, are some of the earliest pieces of evidence linking the Covid-19 pandemic to unintended pregnancies.

One survey conducted by the Kenya Health Information System found that 3,964 girls under the age of 19 were pregnant in Machakos county alone.

Data from the International Rescue Committee found that girls living in refugee camps had been particularly affected.

While only eight cases of teenage pregnancy were reported in June 2019 at Kakuma refugee camp, 62 pregnancies were recorded in June 2020.

At Dadaab refugee camp, there was a 28 per cent increase in reported teenage pregnancies during the April-June period, compared to the same period last year.