More than 3.4 million children aged below five years are targeted across the 13 listed counties

• The campaign was launched after the ministry confirmed six cases of polio in the country in February in Garissa and Mombasa counties.

• The first round was conducted between May 22 and 26 with the second round expected to start from Saturday, June 19 to June 23. 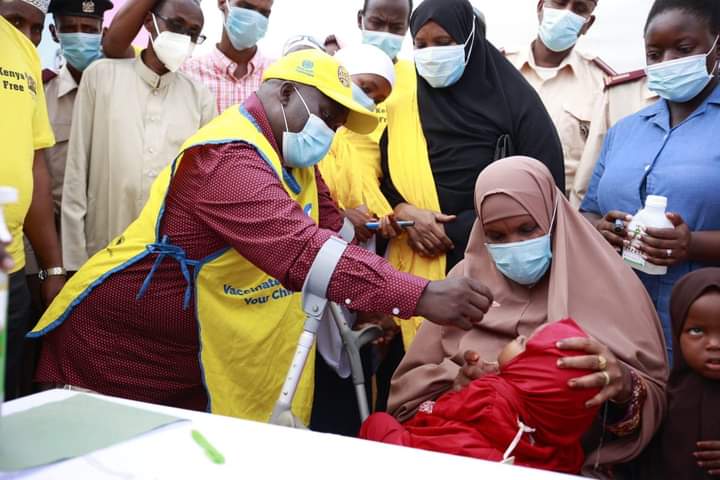 Polio ambassador Harold Kipchumba leads in the administration of doses during the first round of the campaign in Garissa county
Image: MAGDALINE SAYA

All is set for the rollout of the second phase of polio vaccination campaign from Saturday after a successful first round last month.

The first round was conducted between May 22 and 26. The second phase runs till June 23.

The campaign targets 13 counties with a population of more than 3.4 million children below the age of five.

The campaign was launched after the Ministry of Health confirmed six cases of polio in the country in February. The cases were found in Garissa and Mombasa counties.

Three of the cases were picked from healthy children from Somalia who had crossed over to Garissa with the other three cases having been picked from the environment; one in a sewage in Garissa and two in Mombasa.

Polio or poliomyelitis is a disabling life-threatening disease caused by poliovirus. The virus spreads from person to another and can infect a person’s spinal cord, causing paralysis.

“What we see in the country a few times are outbreaks that come from our neighbouring countries so this year, what we are responding to are cases we have detected from children who came from Somalia and because of that as a requirement from WHO we have to respond,” Emmanuel Okunga said.

Okunga is the head of disease surveillance and epidemic response at the Health ministry.

“We intend to get at least 95 per cent of all the children in the country but sometimes because of challenges of the border and other issues, we do not reach that target and that is why it is incumbent upon all of us to try and get all these children,” Okunga said.

The World Health Organisation says even though tremendous progress has been made towards eradication of the disease and reduction of cases by 99 per cent in the last 30 years, the last steps in ending the disease are proving more difficult.

Specialists said there is a build-up of thousands of under-immunised children in the 13 targeted counties.

The situation is compounded by the Covid-19 pandemic which has disrupted immunisation routines.

The ministry has called on parents, guardians, communities, religious leaders, community elders and all those living in the targeted counties to ensure all children aged below five years receive the vaccine.

Post a comment
WATCH: The latest videos from the Star
by MAGDALINE SAYA REPORTER
News
17 June 2021 - 23:00
Read The E-Paper