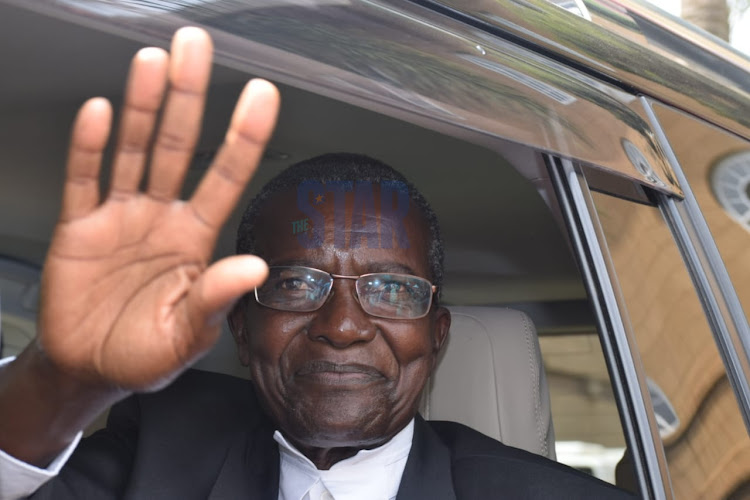 Maraga and Mutunga separately hit at President Uhuru Kenyatta for his objection to the six, saying his decision was in violation of the Constitution.

Last Thursday, the Head of State appointed 34 judges and left out six, sparking uproar from across section of Kenyans.

Nyeri Town MP Ngunjiri Wambugu said the two were to blame for the constant wrangles between the Executive and the Judiciary.

"Retired Chief Justices Mutunga and Maraga should just shut up. They are the reason we are having a fight between the Judiciary and the other two arms of government. They established the thinking that the Judiciary is independent and not a part of the government," Wambugu said.

He said the two wanted to intimidate the President with the hard-hitting press statements.

"They imagined themselves to be above the President in terms of the pecking order of government. They now think they can intimidate him to make a decision that he doesn’t agree with through press statements," the MP added.

Mutunga on Tuesday wrote an open letter to the President criticising his decision to reject the judges while Maraga, a day later, asked Uhuru to follow the rule of law and appoint the judges.

They both argued that the President's role in the appointment was only ceremonial. Maraga said Uhuru is constitutionally bound to appoint all judges nominated by the Judicial Service Commission.

“If there are investigations to be completed on the six judges, shouldn't Uhuru do his work? Afterwards, he will either appoint or charge them,” he posed.

However, constitutional lawyer Ahmednasir Abdullahi said the remarks by the two former chief justices were representative of the views of many Kenyans.

“Maraga and Mutunga expressed the views of almost all Kenyans. Everybody is disappointed that the President, every time he gets an opportunity to observe the law, breaks it. They were right when they said he is a serial breaker of the law,” he added.

Law Society of Kenya president Nelson Havi lauded the two for commenting on issues affecting the Judiciary even after their retirement.

“I am delighted that former chief justices Mutunga and Maraga are still in office and working for Kenyans. The only difference, which is insignificant, is that they do not occupy the empty Chamber 18,” he added.

Abdullahi further poked fun on an explanation by the President that his decision was based on intelligence in his possession.

“There is no credible intelligence the President has on these judges. If he had something credible, he would have shared with the public,” he stated.