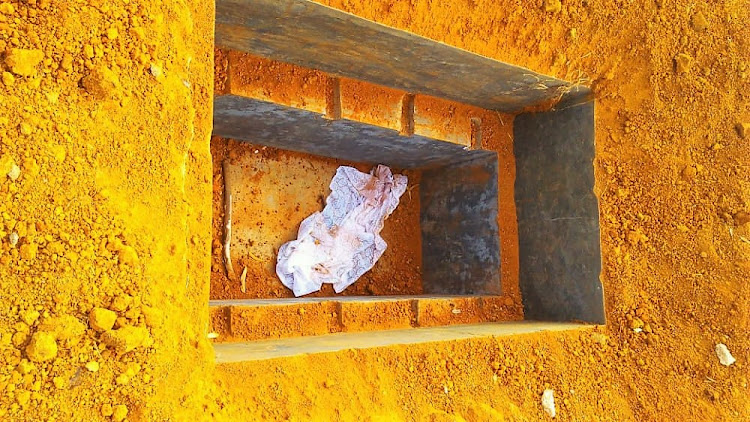 Empty grave The empty grave where Fatuma Mwero, 72 was buried in February this year. Her body was exhumed by unknown people on Monday night.
Image: ELIAS YAA

A family from Mazeras in Kilifi county is in shock after unknown people exhumed the body of a relative who was buried four months ago.

The body, which is still missing, is said to have been exhumed on Monday night.

Daniel Lwambi, 77, said he buried his wife Fatuma Mwero on  February 27, but on Tuesday morning they were informed by villagers that the grave was open and the coffin and body were missing.

The family lives in another parcel of land.

Lwambi added that they suspect the incident was a result of a land dispute with an Arab, who is also claiming ownership of the land where Mwero was buried.

The family has reported the matter to Rabai police station.

Rabai subcounty police commander Fred Abuga said they are yet to find the body.

Abuga said there has been a long standing tussle over ownership of the land where Mwero was buried.

“The neighbour obtained a court order to stop the burial but the family went ahead and buried her there. The neighbour then went back to court but we have not yet received updates from the court,” Abuga said.

He appealed to anyone with information about the exhumed body to report to the police.

Lwambi said the court order was to restrain the parties in dispute from making any development on the land.

“This land belonged to a white settler who left after independence. We applied through the court to be allocated the land and the heirs, who live in UK, permitted us to own the land. The tycoon forged a number from another area to claim ownership of the land,” Lwambi said.

The family has been living on the land since 1960.

Mwero was the first adult to be buried on the land. Three infants were buried there many years ago.