WAS HIT BY BODA BODA

Moi's US envoy embroiled in Ouko murder saga dies at 84

Dennis Daudi Afande is survived by five children and grandchildren. 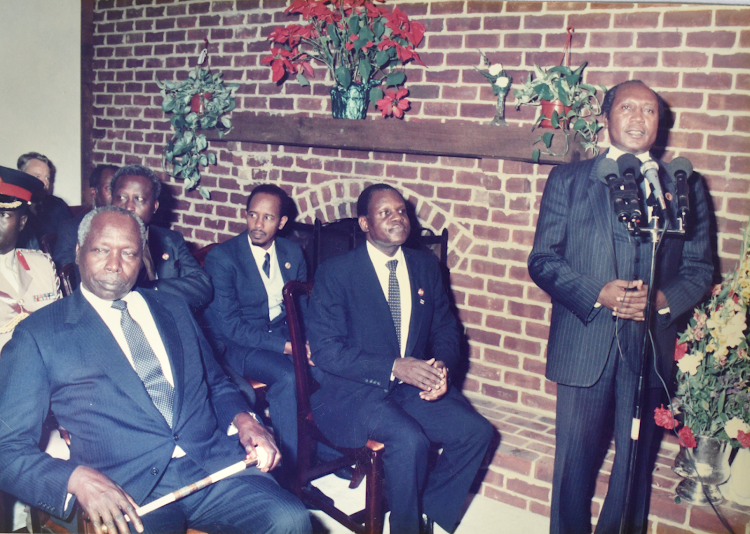 Ambassador Afande (between Moi and Ouko) during the Washington trip. Afande died on Sunday, June 6, 2021 at a Kisumu hospital
Image: FILE

Dennis Daudi Afande was Kenya's ambassador to Washington in 1990 when President Daniel Moi and Foreign Affairs minister Robert Ouko toured the US.

Ouko was murdered soon after the trip and Afande was among those who testified in the inquest. The trip became central to the investigation as speculations were rife that Ouko had sharply differed with some Cabinet colleagues, leading to his gruesome murder.

Afande died on Sunday at 11pm at Avenue Hospital in Kisumu. He was aged 84.

He is survived by five children and many grandchildren.

His sister Domitilla Omuse told the Star Afande was hit by a motorbike late last month near his home in Busia on a Sunday morning as he walked to his local Catholic Church.

The church is five minutes walk from his home and he was rushing to catch the early mass. His sister said he was a staunch Catholic and had various leadership roles.

During the Ouko murder investigations, Afande emerged to strongly discount the theory that Ouko had a near physical disagreement with minister Nicholas Biwott and this somehow contributed to the death.

Afande is remembered to have advised President Moi against taking the Washington trip. He was overruled.

“..... When I learnt that this visit was coming, I thought that will not serve my purpose of trying to push for an official visit... So I advised that the visit should not take place. I then called Robert Ouko, it would have been about a day later, or the same day. He called me back and said he had seen the President, he was aware of my advice but the President said we’re coming," he said in an interview for the documentary Murder at Got Alila: Who killed Dr Robert Ouko and Why?

Afande joined the public service at Independence and dedicated his working life to the service of the government.

Besides Washington, he also served as Kenya’s ambassador to the United Nations Mission in Geneva, Switzerland, the UK, Germany, France, Egypt and Saudi Arabia.

He was also a member of the Standing Committee on Human Rights, as well as chairman of several public entities, including the Capital Markets Authority, Kenya Power and Lighting Company and the National Council of Children’s Services.

He also served as a board member of Kenya Airways, Standard Chartered Bank, Undugu Society and Nyumbani Children’s Home.