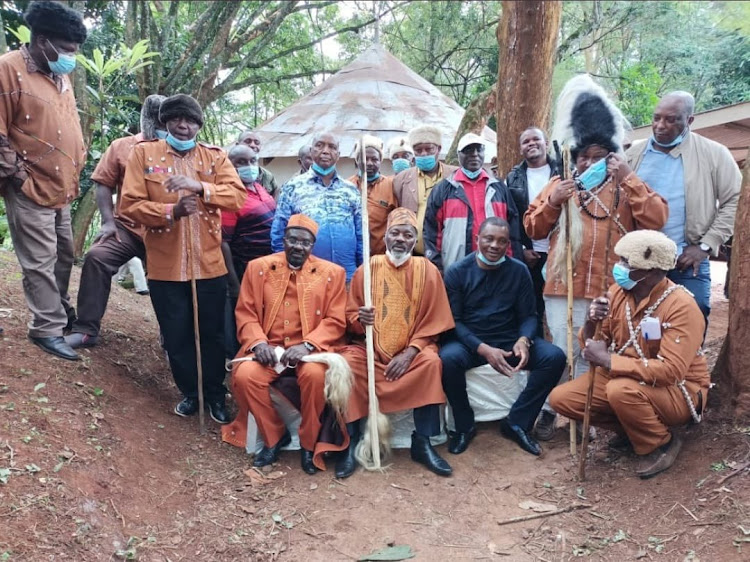 National Assembly Speaker Justin Muturi with Kikuyu elders after being coronated as Mt Kenya spokesman on May 20, 2021
Image: COURTESY

It is yet another electioneering season and elders are back in the limelight as politicians scramble for their endorsement ahead of the 2022 General Election.

Various factions have emerged within many councils of elders who are crowning politicians in readiness for 2022 when the hunt for votes hits a fever pitch.

It is their involvement in politics and dalliance with politicians that have put them on the spot.

And as 2022 beckons, reports have emerged of elders fighting over “gifts” they receive from politicians after paying courtesy calls or conducting rituals.

On Friday, the Kikuyu Council of Elders cleansed the Mukurwe wa Nyagathanga shrine in Murang'a and nullified the installation of National Assembly Speaker Justin Muturi as the Mt Kenya spokesman.

Elders said Muturi's coronation at the shrine on May 20 had desecrated the sacred place.

Ndung'u Gaithuma, the chairman of Kiama Kia Ma —the cultural pillar of the Kikuyu Council of Elders, regretted that some elders were being influenced to make political endorsements.

Gaithuma said their decision to cleanse the Mukurwe was Nyagathanga shrine was purely a cultural event.

Interestingly, Murang'a Governor Mwangi wa Iria, one of the leaders eying the Mt Kenya kingship was among those who graced the cleansing ceremony.

But Kikuyu Council of Elders chairman Wachira Kiago told the Star the cleansing ceremony was cultural. “We were defending our shrine. Nothing like that has ever been done at the shrine. You cannot endorse a politician at such a place,” Kiago said.

He said they have been receiving “insults” since the cleansing ceremony.

“They will talk and we will listen but the fact of the matter is we were not happy with what happened at the shrine,” he added.

He refuted claims that the cleansing ceremony was driven by politics and money. “We were just defending our shrine. If there was money involved, then it must be the other group,” Kiago said.

Muigai said the rival group had the right to front the person they like as their spokesman.

“If they want another person they can bring him forward. We will not block that road but our person is Speaker Muturi,” Muigai said.

He said elders from the other faction have a right to criticise them for picking Muturi. “Muturi has been accepted and we have already given him the mandate,” Muigai said.

Political analysts Daniel Orogo and Joseph Mutua said the activities of elders are bound to intensify as elections approach.

“Elders are believed to have influence and thus politicians will go to them for blessings and endorsements,” Orogo said.

Mutua said money plays a key role as elders expect something in return for their endorsements.

“With elections around the corner, some elders may tend to focus on endorsing politicians rather than playing their cultural roles,” he added.

In January, Baringo Senator Gideon Moi was crowned a Kalenjin elder by Talai elders. A similar ceremony had been halted days earlier after youths blocked Gideon from meeting with the elders.

Baasi said the DP had been installed as the community kingpin following the death of former President Daniel Arap Moi.

In February, Amani National Congress party leader Musalia Mudavadi's presidential bid got a boost when Western Kenya Council of Elders backed him for the top seat

The elders were drawn from all communities living in Trans Nzoia, Kakamega, Vihiga, Busia and Bungoma counties.

On May 1, ODM leader Raila Odinga hosted the Kikuyu Council of Elders at his Karen home in Nairobi.

In October last year, Raila hosted the elders at his Bondo home in Siaya county.

After the Bondo meeting, the Luo elders and select political leaders were to be hosted for the second part of the meeting in Nyeri. The event was postponed indefinitely due to increasing Covid-19 cases.

In October last year, the Kenya National Elders Council embarked on what they called a reconciliation drive of political bigwigs in the wake of rising political temperatures.