• "The Judiciary is still in dire need as the backlog of cases is increasing" - Koome.

• The other 34 judges took their oath of office earlier on Friday. Koome attended the swearing-in, which Uhuru presided over at State House, Nairobi. 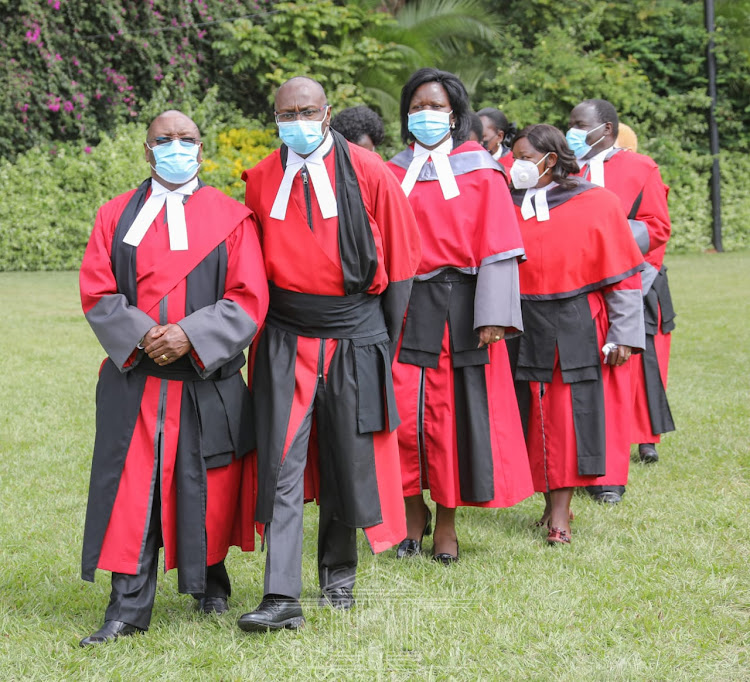 The Gazetted judges of the Court of Appeal and various Divisions of the High Court at State House, Nairobi for their Swearing-in Ceremony presided over by President Uhuru Kenyatta on June 4, 2021.
Image: PSCU

Chief Justice Martha Koome has spoken on President Uhuru Kenyatta's omission of six judges from the list of judges gazetted to take up positions in the Court of Appeal, Environment, and Labour courts.

Distancing herself from the recruitment process, which happened close to two years ago - before she was the CJ, Koome urged Uhuru to appoint the remaining six judges.

In a statement on Friday, she said, "The 34 Judges have today taken their oath of office witnessed by H.E the President. I note with great concern that 6 persons who wererecommended by the JSC for appointment were not gazetted."

"The Judiciary is still in dire need as the backlog of cases is increasing. We should find a lasting solution so that moving forward, this kind of delay and misunderstanding will be a thing of the past."

The other 34 judges took their oath of office earlier on Friday. Koome attended the swearing-in, which Uhuru presided over at State House, Nairobi.

Koome gave the example of what happened in January 2014, when the JSC recommended the appointment of 25 nominees as judges, and in June 2014, the President initially appointed 11 of them and subsequently appointed the remaining 14.

Uhuru gazetted 34 of the 40 judges he had been pressed to appoint since 2019 on Thursday.

On Friday, the LSK lawyers' lobby demanded that the president should appoint the six remaining judges omitted from his gazetted list of appointments, or it will go to court.

Those rejected include Aggrey Muchelule, George Odunga, Weldon Korir, and Prof Joel Ngugi who were recommended for the Court of Appeal.

This comes as the Court of Appeal is stretched with the appointment of Martha Koome as Chief Justice and Daniel Musinga becoming the President of the Appellate court following William Ouko's appointment as a Supreme Court judge.

This also comes as a seven-judge bench is set to hear an appeal by the President, ODM leader Raila Odinga, the Attorney General, and IEBC following the nullification of the BBI process.

Ngugi was the judge who led the team which cut short the BBI train. Odunga was part of the team.

The late lawyer Harrison Ogweno Okeche who died in October last year was among the nominees submitted to the president for appointment to the Employment and Labour Relations Court.

The president also appointed 18 judges to serve as Judges of the Environment and Land Court.

The list of the 41 judges was forwarded to the president for appointment in 2019 during the tenure of former CJ David Maraga.

In mid-2020, Maraga tried to push the president to appoint the names forwarded to him but he did not receive any response from Uhuru.

Maraga had said in a presser, which he opted after saying that the office of the president ignored his calls, that the constitution does not donate any mandate to the president to perform any other activities but to appoint the names received from JSC.

The lobby wants Koome to use her experience in the Judiciary and access to the President to have the judges sworn in.
News
3 months ago

He says the Court of Appeal stalling confirmation of the judges
News
3 months ago
by STAR REPORTER The Star
News
04 June 2021 - 20:42