•The Kenya Roads (Amendment) Bill, 2021 seeks to extend the agency bosses’ term in office to five years from the current three.

•Presently, to qualify as director-general, one has to be an engineering graduate, hold a master’s degree, and have 15 years of experience post-registration. 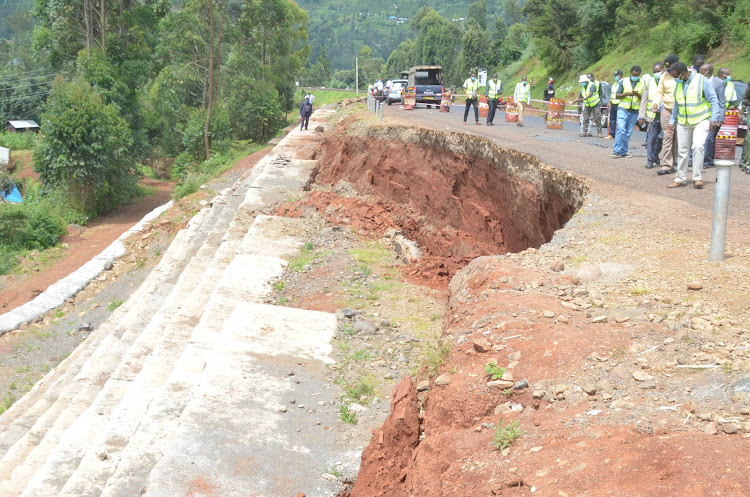 Kenha officials inspect a section of Thika Murang'a Nyeri road commonly known as Nyoka Nyoka road that has sunk for the second time in three years at Kanjama in Mathioya.
Image: Alice Waithera

A new bill seeks to give youthful engineers a chance of leading the country’s roads agencies Kenha, Kura, and Kerra with its proposal to reduce the required experience to 10 years.

At the same time, the Kenya Roads (Amendment) Bill, 2021 seeks to extend the agency bosses’ term in office to five years from the current three, renewable once.

This may see Kenha director-general Peter Mundinia and his Kura counterpart Silas Kinoti get more days in office.

The Kenha boss, should MPs pass the bill sponsored by Transport committee chairman David Pkosing, may hold the fort until 2023, having been appointed in August 2015.

His first term ended in 2018 and is set to leave this year should the status quo remain. Kinoti, for his part, may stay on until 2025 should MPs pass the bill.

Persons who qualify to hold the post of director-general are largely above 50 years, hence discriminating against youthful engineers with the capacity to run the agencies.

Presently, to qualify as director-general, one has to be an engineering graduate, hold a master’s degree, and have 15 years of experience post-registration.

Trends over the years show that most engineers are employed at 26-years-old and take 10 years in practical training to be qualified.

The bill proposes that a person shall be qualified for appointment as a director-general if they have at least 10 years experience in highway and road engineering.

Pkosing, in the bill, further sets that one would need at least 10 years experience in a managerial position within the roads sector.

The qualification for a bachelor's degree in civil engineering and a masters' degree from a university recognized in Kenya are retained.

Director Generals will also have to be registered with the Engineers Board of Kenya and must be persons of integrity as provided for in Chapter 6 of the Constitution.

The bill also seeks to align the existing law which identifies the auditor general and controller of budget as one office, hence presenting audit challenges.

“The fact that people above 50 years can hold the position of director-general is discriminatory. The law was done by engineers to close other people out,” Pkosing told the Star.

“We are trying to reduce the 15 years to 10 years so that someone within 40 can qualify as director-general.”

Persons without engineering qualification have been locked out of the agencies.

Parliament has been under pressure to open the post, being a managerial job, to factor for all management degrees.

Pkosing said much as there was pressure on his committee to open up the qualification, engineers do well in the roads sector.

“If you are leading engineers and you are not an engineer, you are likely to be manipulated. What if they give you the wrong bill of quantities? Road engineering is not like any other profession, it is a science.”

“The director-general is the one signing the contracts. If he or she is given a bill of quantities that they don’t understand, how do they even approve budgets?”

The lawmaker said that roads consume almost 30 per cent of the country’s budget, hence cannot be run by persons who have qualified in social sciences.

The strict considering of engineering qualification does not apply to the Kenya Roads Board since its role is to look for money for running the roads agencies.

The current KRB manager holds a Bachelor of Commerce from the University of Nairobi and an MBA from Oxford University, UK.

Post a comment
WATCH: The latest videos from the Star
by MOSES ODHIAMBO Journalist and Political Writer
News
23 May 2021 - 23:00
Read The E-Paper