Uhuru and Ruto have not met for two months

DP has been locked out of key state functions, making him a stranger in the Jubilee administration.

• The last time the DP was invited for a government function was for a Cabinet meeting on February 25.

• The latest event the DP was not invited to is the state visit by Tanzania President Samia Suluhu. 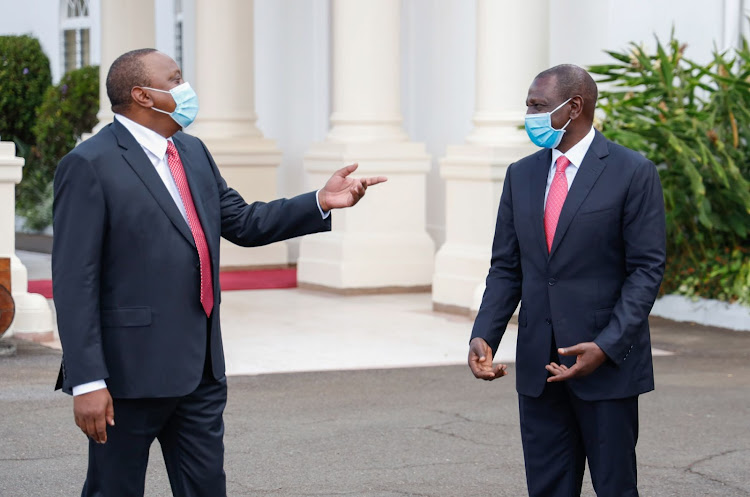 President Uhuru Kenyatta and his deputy William Ruto have not met for almost two months to discuss government business in a further pointer to their deteriorating relationship.

The two last met face to face at a Cabinet session in State House, Nairobi, on February 25.

However, the President and the DP were to again informally share a podium in February during the burial of former Cabinet Minister Simeon Nyachae in Kisii county.

Over the last two weeks, the two have had engagements loaded with political symbolism, raising questions about whether the country’s top two leaders are on talking terms.

Interior Cabinet Secretary Fred Matiang'i has taken over most of Ruto's government responsibilities and has been Kenyatta's de facto number two.

Matiang'i has presidential ambitions and is reportedly being prepared to contest as a compromise candidate backed by Kenyatta and ODM leader Raila Odinga.

Ruto was not at State House on Tuesday for the reception of a visiting head of state. Instead, Matiang'i and other Cabinet Secretaries flanked Kenyatta.

He was conspicuously missing during the elaborate two-day visit of Tanzania’s President Suluhu Hassan, including when she addressed the Kenyan-Tanzanian business community and a joint Parliament sitting.

Ruto was also a no-show during  Labour Day celebrations at State House on Saturday.

During both events, Ruto’s office said he was not invited.

"I can confirm there was no invite received. But you can check with State House," Ruto's director of communications Emmanuel Talam told the Star in regard to Suluhu's visit.

And with the Cabinet meetings having been suspended until further notice, Uhuru and Ruto are likely to meet only during national celebrations, the next one being on June 1—Madaraka Day.

Ruto has on the other hand pushed on with his 2022 presidential bid, holding meetings with his supporters and strategists.

Last week, Ruto dumped Uhuru's economic strategy in favour of what he calls a bottom-up approach. Unlike before when the two spent a lot of time together and were seen in public together often, the DP has been undertaking his political activities in his official residence in Karen

Last month, the DP also revealed that he was not invited for coronavirus vaccination at State House when the President and other Cabinet members were vaccinated.

He revealed that he had confronted Uhuru in the presence of NIS director-general Philip Kameru over claims that he was overstepping his roles as DP.

“…And the President was candid with me, there is no such information. The director of intelligence was there,” Ruto stated.

On February 19, the DP was also locked out of yet another meeting attended by Cabinet Secretaries, chief administrative secretaries and principal secretaries in what State House said was to “discuss government priorities for the current calendar year”.

On July 8 last year, the DP was not given a log-in password for a virtual meeting that was chaired by Uhuru from the same venue.

Insiders say the hard stance maintained by the President to edge Ruto out of government is part of a wider plan to reduce Ruto’s influence and networks in government, especially the security apparatus ahead of the elections.

Ruto sits in the critical National Security Committee that ratifies key issues of national importance, including the management of elections.

Former Speaker of the National Assembly Francis ole Kaparo said the kind of issues Kenyans have been treated to do not reflect maturity.

“Such things were unheard of. Leaders should respect each other and the offices they occupy,” he told the Star.

Chairman of Rift Valley Council of Elders Gilbert Kabage said Kenyatta was the cause of the infighting.

“It is the President himself who has decided to sideline the DP despite the fantastic job he has been doing in assisting him in running the government,” he said.

But former Cabinet Minister and Kwanza MP Noah Wekesa defended the President and blamed the DP for the cold war.

“DP moved on to plan his future. He started his campaigns early despite the warning from the President. If you are the President, you will feel the same. Humility can take you very far,” he said.

“If I was the DP, I would not go that direction of overshadowing the President. You cannot overshadow your boss. It is a natural rule of the game.”

Kikuyu Council of Elders chairman Wachira Kiago said Uhuru and Ruto were elected as a pair and they should stop the fights. He said it has become difficult for them to know the genesis of the wars.

“As Kenyans, we gave them the mandate to lead the country. We do not really know what is causing all these fights. We do not know who is the aggressor and as wananchi we expect them to work together and show good leadership,” he told the Star on the phone.

Savula says bid to impeach Ruto has the backing of Uhuru, Raila
News
11 months ago

I have been humiliated in government, admits DP Ruto