• 'We will be doomed if the slaughterhouses are allowed to operate. It is very sad on our end,' Cynthia Lemayian, a donkey owner from Kajiado, told the Star by phone.

• On Wednesday, Justice Richard Mwongo criticised the state for failing to respond to issues raised by the slaughterhouse. 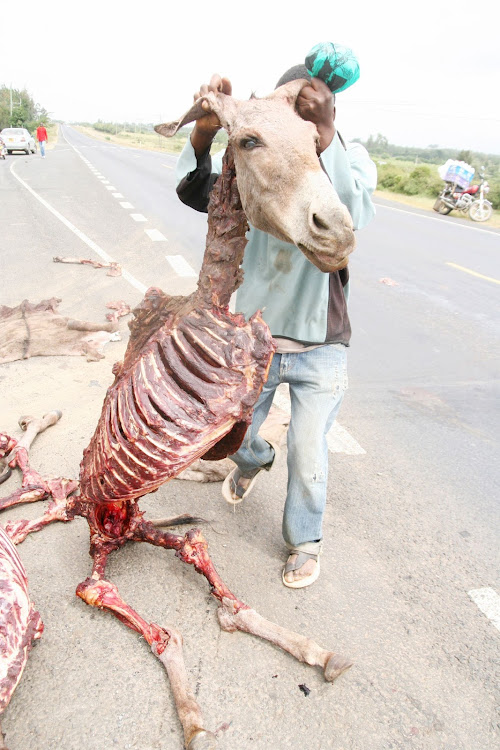 Donkey owners have criticised a High Court decision that on Wednesday lifted a ban on the slaughter of the animals.

Those who spoke to the Star said the move is a blow to the campaign to protect donkeys and communities that are dependent on them for transport and other uses.

"We will be doomed if the slaughterhouses are allowed to operate. It is very sad on our end," Cynthia Lemayian, a donkey owner from Kajiado, told the Star by phone.

Lemayian said donkey theft is set to increase. "The donkeys had become healthy following the short time the ban was in place. We do not know what will happen now that slaughterhouses have been allowed to continue operating," she said.

Lemayian said her mother and sister lost four and two donkeys respectively under mysterious circumstances. She said her six donkeys have helped her transport farm produce to the market and fetch water and firewood.

James Shukur, a Narok resident with 100 donkeys, said he lost 33 at the height of slaughterhouse operations.

"The return of slaughterhouses will fuel donkey theft," he said.

Fred Chacha from Migori said his donkeys have been of much help in his day-to-day activities. He had eight donkeys but seven were stolen, leaving him with a foal. Chacha now has nine donkeys.

On Wednesday, Justice Richard Mwongo criticised the state for failing to respond to issues raised by the slaughterhouse.

The ban was imposed in February 2020 by Agriculture CS Peter Munya. It came after concerns were raised about declining donkey populations.

Star Brilliant, one of the slaughterhouses, moved to court to challenge Munya's directive.

“The state has failed to sufficiently defend this case and this court quashes the Legal Notice 63 of 2020 as it violates the rights of Star Brilliant under Article 47 of the Constitution,” Mwongo said.

"Donkeys are poor breeders with high abortion rates.  They have a gestation period of 12-14 months calving at an interval of one foal in three to four years unlike a cow that gives birth every one year," Ojwang said.

Ojwang said a study by the Kenya Agricultural and Livestock Research Organisation in 2019 showed that the annual mean rate (5.1 per cent) of donkeys slaughtered was five times higher than the annual donkey population growth rate (1.04 per cent).

He said a projection on the number of donkeys slaughtered implied that by 2023, the donkey population will be depleted, holding all factors constant.

The donkey population reduced by 789,258 in three years after the opening of the first donkey slaughterhouse in Kenya in 2016.

Along with Star Brilliant, three donkey slaughterhouses are set to reopen following the lifting of the ban. The slaughterhouse in Naivasha is worth Sh200 million. It can slaughter 200 donkeys a day.

Goldox Slaughter House in Mogotio, Baringo county, is reported to be worth Sh300 million, began its operations in 2016. It is owned by a Chinese investor and can slaughter 400 donkeys a day.

Silzha Slaughterhouse in Lodwar, Turkana county, was opened in 2016 and is said to have cost Sh200 million. The facility can slaughter 200 to 300 donkeys a day.