Why Otiende Amollo was kicked off Justice committee

Allegedly ejected as he had threatened to resign should amendment push fail. 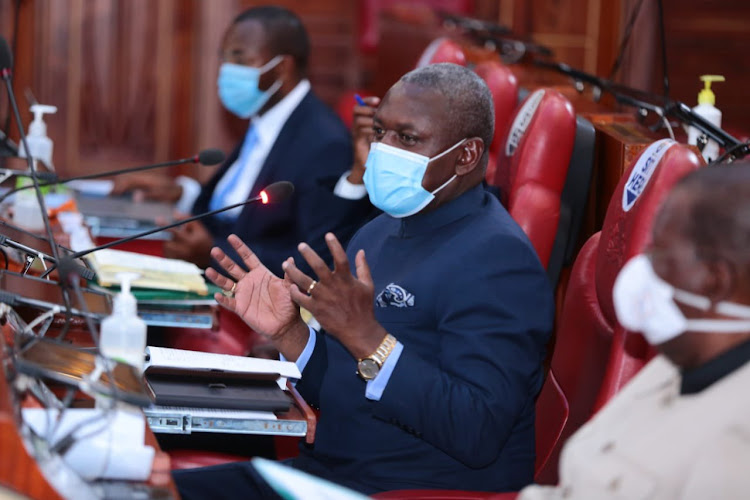 Rarieda MP Otiende Amollo was removed from the Justice and Legal Affairs committee because of blackmail, ODM national chairman John Mbadi has claimed.

He said there were no plans to remove Siaya Senator James Orengo as Senate Minority leader.

Otiende was kicked off the JLAC on Tuesday. He had been vice-chairman.

Amollo, Orengo and Nyamira senator Okong’o Omogeni have been calling for amendments to the BBI Bill, putting them at loggerheads with ODM leader Raila Odinga.

The three co-chaired the joint parliamentary team that considered the Bill but they said certain clauses needed to be amended before the Bill is subjected to a referendum.

On Wednesday, Mbadi said they removed Amollo because he had threatened to resign from the JLAC as well as his MP position should the push for amendments fail. That would throw the committee and the BBI process into disarray and would be a major embarrassment.

The Rarieda MP is said to have made the threats last Friday during a burial ceremony in Migori where Orengo was also in attendance.

Speaking on Nam Lolwe FM, Mbadi said they perceived the remarks were directed at the ODM leadership, which does not support any amendment to the Building Bridges Bill.

Mbadi said party leaders, including Raila, listened to the audio recording of Amollo's remarks and were not pleased.

“Raila listened to the audio and called Otiende and Orengo for a meeting on Monday. Orengo went but Otiende refused, only to text Raila that his stand is unchanged,” Mbadi said.

“The party has not held any meeting for removing Orengo from his post. That is a lie,” Mbadi said, responding to speculation that Orengo would be the next to go.

And as ODM faces a storm within its ranks, rivals, often criticised by Orange Party leaders, now seem to be having the last laugh.

Raila has publicly declared the BBI Bill and referendum can only be endorsed or rejected at the ballot.

ODM national treasurer Timothy Bosire has also thrown his weight behind the demands by the Orengo faction.

However, BBI secretariat co-chairman Junet Mohamed, who is ODM director of elections, said Orengo should not disown a document he helped polish.

Mbadi, who is also the National Assembly Minority leader, also wants the Bill passed in its current form.

Elgeyo Marakwet Senator Kipchumba Murkomen said Orengo is the perfect example of the phrase crafted by Orengo himself that “government eats its own people.”

"I know exactly what SC Hon James Orengo feels. I have been there. You know you are right but you are still torn between standing by your principles and kissing … to survive. I didn’t know that the opposition, too, eats its own people," Murkomen tweeted.

When Orengo crafted the phrase, he probably never thought it would also be used to describe his own situation in the future.

Gatundu South MP Moses Kuria has also commented on the storm in ODM. Kuria urged Amollo to start learning that politics is very different from being a law professional.

Nairobi lawyer Donald Kipkorir said Amollo should blame himself for being removed from the committee. He said Amollo, like a small child, thought he was popular without knowing the person who made him popular is Raila.

“Otiende Amollo makes the kindergarten mistake of every politician in Kenya riding on the coattails of Raila Odinga," he said. "They think they’re popular on their own."