• Justice William Ouko who was Wednesday nominated to sit on the Supreme Court bench by the Judicial Service Commission.

• Until his nomination, Ouko served as President of the Court of Appeal 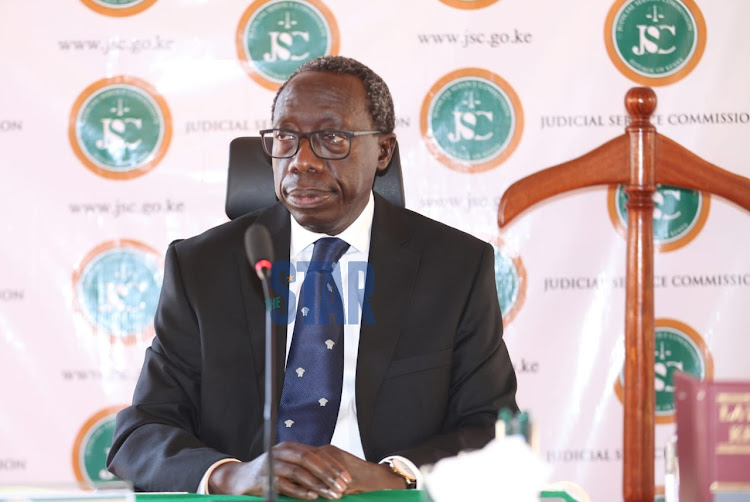 Justice William Ouko before the Judicial Service Commission panel at the Supreme Court on May 5, 2021.
Image: FREDRICK OMONDI

He is considered both a liberal and progressive judge in the corridors of justice.

He does not believe in the death sentence which promotes Hammurabi’s retaliatory justice or an eye for an eye.

The man is Justice William Ouko who was Wednesday nominated to sit on the Supreme Court bench by the Judicial Service Commission.

Until his nomination, Ouko served as President of the Court of Appeal.

Ouko was one of the seven candidates interviewed this week for the position of judge of the Supreme Court.

Ouko however said he doesn't have a remedy he can tell the JSC to use.
News
1 month ago

In 1997, he took part in training in the Washington International Management Institute in USA.

Ouko attended another training in the administration of courts in the USA among others in 1991.

He also took courses at the former Government Training Institute and the former Kenya College of Communications Technology, Mbagathi.

Justice Ouko prides himself in having a better understanding of the relationships within the Judiciary having served as secretary of the Judicial Service Commission for over four years.

Ouko has been involved in institutional reforms in the Judiciary from the Kotut Committee on the financial independence of the Judiciary and the Delinking Committee that saw the Judiciary cut historical links with the Executive on staffing.

Other task forces Justice Ouko sat on included the Kwach Committee, which among other things addressed the issues of judicial rectitude.

The judge was tasked in 1994 by the Chief Justice to draft the first code of conduct for the Judiciary.

He also served as secretary to the Goldenberg Commission which looked into one of the biggest scandals during the late President Daniel arap Moi's era.

The Ouko Task Force on the Judiciary Reforms informed the entire Chapter 10 of the Constitution; the expansion of the JSC, its functions, vetting of judges and magistrates, the Judiciary Fund and performance management.

Justice Ouko was appointed a Court of Appeal judge in 2012.

He became the President of the Court of Appeal on March 9, 2018, after he was elected overwhelmingly by fellow judges.

Justice Ouko served in the High Court from 2004 to 2012, working in Malindi, Meru and Nakuru.

Before being appointed as High Court judge he was a registrar there between 2002 and 2004. He also served as the pioneer chief court administrator.

He studied for his bachelor’s degree at the University of Nairobi and a master's at Egerton University.

Ouko is highly regarded by his peers and staff in the Judiciary and respected by lawyers.