Claimed fisherman came at him with a panga, blamed two fishermen for stock theft.

• Wiyema's lawyer Cliff Ombeta argues jailing him will make no difference as he had suffered enough in detention since the 2014 murder on Crescent Island, Lake Naivasha.

• His victim's lawyer called for maximum sentence, death, saying he attempted a cover-up and blamed two innocent fishermen for stealing a sheep. 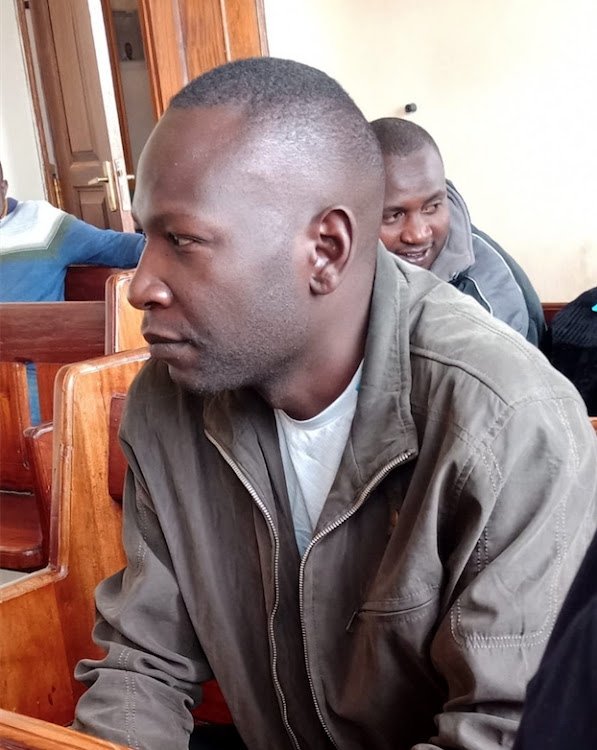 A police officer who murdered a Lake Naivasha fisherman seven years ago over a stolen sheep is now begging for forgiveness and mercy, saying he doesn't want to go to jail.

Evans Maliecha Wiyema, formerly of the Anti-Stock Theft Unit, on Wednesday pleaded for the victim's family to forgive him so he can be reformed and live a better life.

He will be sentenced on July 28 and was speaking in Naivasha in mitigation, seeking a lenient sentence, a non-custodial sentence. He remains in Naivasha Maximum Security Prison.

Through his lawyer Cliff Ombeta, Wiyema pleaded for forgiveness from the parents of his victim Moses Wanyoike, saying, "He is before them on bended knee and asking for forgiveness."

Ombeta said that his client, 35,  was “still in his youthful days, still productive to his family and the public". He said he joined service in 2007 and had not been involved in any criminal conduct before the murder.

Ombeta said that when his client committed the offence, he was only 29 years old but now he has matured and would have handled the situation differently.

"Your honour, the convict is remorseful and has regretted the incident since the moment it occurred. Today he is before you and he is humbly requesting  leniency," his lawyer said.

Wiyema was convicted on February 22 for killing Wanyoike, a 25-year-old fisherman, the father of a newborn.

The close-range, single shot to the head ended the fisherman's life on July 27 2014. He allegedly had stolen a sheep worth Sh10,000 belonging to Crescent Island. It had been reported missing the day before.

On the day Wanyoike was killed, he and two other fishermen — Johnson Ndichu and Douglas Tutu— were fishing at Crescent Island when the officer shot him.

Wayema and his colleague pursued the suspects hiding in the reeds. A single shot killed Moses.

Wiyema said he fired in self-defence because the man was going to attack him with a panga, which was untrue.

He and his colleague charged the two surviving fishermen with the theft, charges dismissed due to lack of evidence. Wanyoike's body was later found in the lake.

High Court judge Richard Mwongo convicted Wiyema, saying he had acted with criminal intent, recklessly an in violation of the law.

"His actions were made all the more unacceptable by the fact he did not report the incident but instead chose to assist in prosecuting the fishermen," Mwongo said.

Wiyema acknowledged the family has suffered a painful loss in the death of their son and breadwinner..

"It's time now for them to stop thinking with their heart but their head because if you never stop crying, the pain remains," Ombeta said.

He said his client has three children, one eight years old and two twin four-year-olds who have suffered due to his detention.

Ombeta pleaded for a non-custodial sentence.

"He can be rehabilitated, go back to society. He has been out there. A good candidate for probation who comes to you on bended knee."

"Jailing him will not make any difference, he said, urging the judge to use his discretion and set a precedent to be followed by other courts handling similar cases.

"Even if we were to use a Muruatetu position  [ruling a death sentence is not mandatory], it gives you latitude and if you were to give him that leeway, you will set a good president. Everybody here has suffered but let us give him a chance."

The victim's lawyer, Edward Mbanya, urged the judge to give Wiyema the maximum sentence, that his offence deserves.  He said the former officer had shown no remorse.

The fact that Wiyema pressed false charges against his victim's friends to cover up for his own conduct showed he had no remorse, he said.

"He had engaged in an attempted cover-up of the murder. Looking at the gravity, there are many lives affected, Moses Wanyoike's and also Douglass Tutu and Johnson Ndichu and their families. We will be praying that you give the maximum sentence for this act."

Ombeta asked the court to grant the accused bail pending sentencing but the judge said, "No. Let us do sentencing first."