• The Ford-K leader said the Bill contains several provisions that will erode the gains the country has made.

• The senator took issue with the second schedule of the Bill that creates 70 constituencies, creation of the Judiciary Ombudsam, scrapping of 47 woman rep positions in the National Assembly and creation of the Youth Commission. 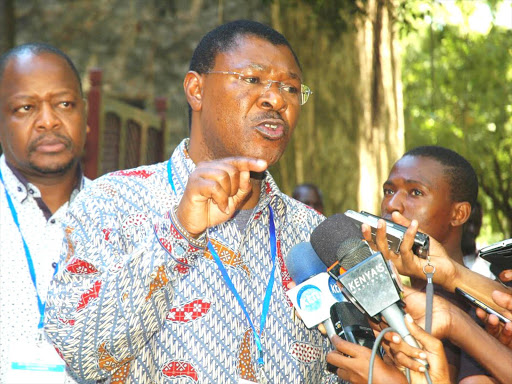 Bungoma Senator Moses Wetangula on Tuesday tore into the Constitution of Kenya (Amendment) Bill, 2020 and called for radical amendments to ‘realign’ several provisions.

In a surprise move, the Ford Kenya leader who is a principal in the One Kenya Alliance said to be enjoying the blessings of President Uhuru Kenyatta, said the bill contains several provisions that will erode the gains the country has made.

Speaking during the debate on the Bill in the senate chambers on Tuesday, Wetangula said the provisions are a clawback and should be changed by parliament to realign them to the Constitution.

“That is why I don’t agree with proponents that we cannot amend this Bill. If you read Article 257 to the latter, nothing ousts the authority of Parliament to amend any bill, including a bill such as this,” he said.

The senator took issue with the second schedule of the Bill that creates 70 constituencies, creation of the Judiciary Ombudsam, scrapping of 47 woman rep positions in the National Assembly and creation of the Youth Commission.

“I don’t understand why we are creating a Youth Commission. We have so many laws that govern our youth. Kenyans must learn to understand that youth is neither a disadvantage nor a disability. It is a transit state in human life,” he said.

The vocal lawmaker, a lawyer by profession, questioned the constitutionality, rationale and criteria for the creation and allocation of 70 constituencies to some 47 counties.

“I went through all the submissions from the 47 counties, I have not found anywhere, request by any Kenyan for 70 additional constituencies,” he said.

“What the proponents have done, they have sat somewhere without any justification decide that Kenyan deserves 70 constituencies and allocated them without any rationale. This is not right,” he added.

The former minister said that the proposed amendments are a clawback on women empowerment, adding that the bill is proposing to ‘dump’ 47 senators in the senate without resources.

“This amendment is a clawback on the empowerment of women. I want to encourage our women not to be hijacked by populism and be guided by facts so that we can be able to help disadvantaged women of this county,” he said.

Despite allocating more resources, Wetangula said the Bill is not strengthening institutions of governance to ensure prudent use of taxpayers’ money by those in authority.