• DP Ruto said that both the ethnic political model and its counterpart trickle-down economics continue to impede the country’s full political, economic, and social development potential.

• Ruto said that there is a need to engineer a fundamental paradigm shift from the perennial politics of personalities to a candid, open, and frank engagement with the people on the economy 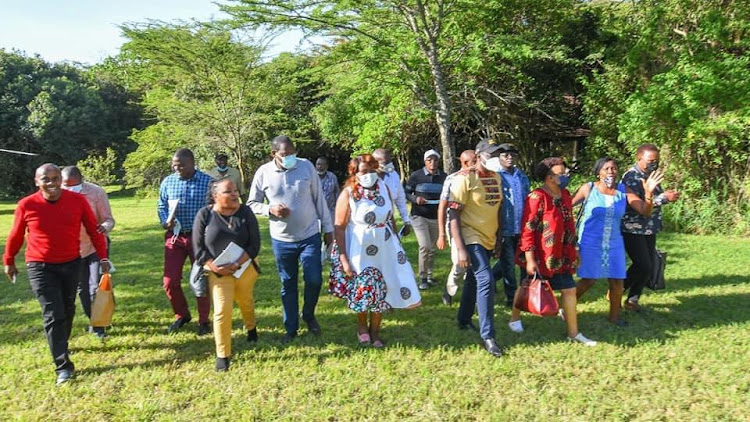 DP William Ruto arriving to the venue of the meeting accompanied by a number of leaders from Mt Kenya Region.
Image: COURTESY

Deputy President William Ruto has continued to call on the need to shift the focus of the economic model in the country from the trickle-down to the bottom-up approach.

In a statement on Sunday after meeting with leaders from eleven Mt Kenya region counties between April 30 and May 2, the DP said that the current model excludes millions of citizens from the economic mainstream, hence, denying them the opportunity to realise their full potential.

“The trickle-down model excludes millions of citizens from the economic mainstream thereby denying them the opportunity to realize their full potential. This model has failed to create enough jobs, expand opportunities and bring prosperity. Instead, it has fostered a hostile environment that has made it difficult for enterprise, trade, business, creativity, and initiative to thrive,” Ruto said.

Ruto said that from the experience of the past nine years and building on the foundation that has been laid, it is now necessary to progress in two fundamental ways, including;

“We must engineer a fundamental paradigm shift from the perennial politics of personalities, positions, and power to a candid, open, and frank engagement with the people on the economy, their aspirations, and their future,” Ruto said.

The DP said that over the years, political positions have been created, power has been shared this way, and that way, leaders’ interests have been catered for but this has not improved the lot of the overwhelming majority of Kenyans.

“The solution is definitely elsewhere: A new political conversation about ordinary people, not leaders, and a new bottom-up economic model, not trickle-down economics!”

He said that both the ethnic political model-it is our turn-and its counterpart trickle-down economics continue to impede the country’s full political, economic, and social development potential.

“Many Kenyans imprisoned in ethnic political ghettos disguised as political parties and chaperoned by tribal kingpins are denied the opportunity to participate meaningfully in the political processes that make critical decisions about their future.”

He added that today, the number of excluded Kenyans is in the order of 10 million, half our national workforce.

“To get these 10 million Kenyans out of the rut, a new approach is not only necessary and desirable, but it is also an existential imperative.”

The team structured the framework for the consultations and agreed on;

1) The most important conversation is on the empowerment of small businesses, increasing farmers’ earnings, and creating an enabling environment that rewards hard work, nurtures creativity, and promotes initiative for all to flourish.

2) To ensure that an all-inclusive conversation takes root, we have agreed on a framework of engagement beginning at the grassroots with farmers, entrepreneurs, traders, cooperatives, other producer and business associations encompassing all the key agricultural value chains in particular tea, coffee, dairy, fresh produce, rice, and miraa.

3) Patriotic Kenyans of all shades – scholars, professionals, subject matter experts, business, and community leaders – will be brought on board to facilitate this comprehensive, all-encompassing national engagement.

The DP added that the conversation will be carried out across the country and that it will culminate in a national economic charter.