• He was granted a police bond as investigations into the shooting incident along Moi Avenue, Nairobi go on.

• A guard and a bystander were shot and seriously wounded in the incident. 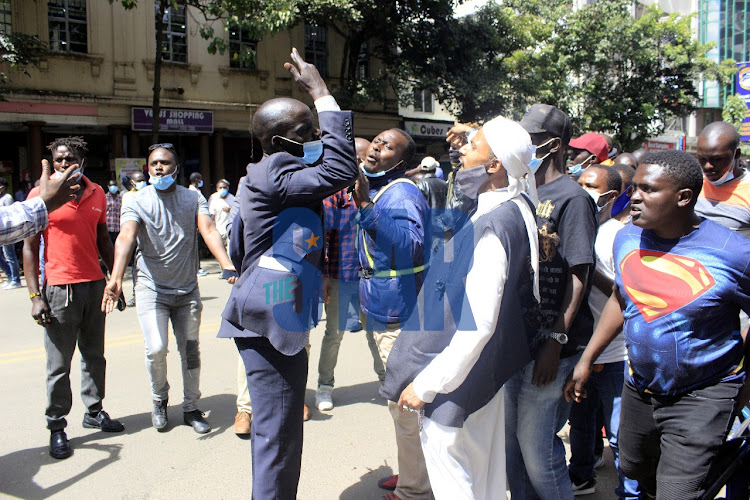 A police officer argues with members of the public after a security guard attached to Care Watch Security Services was shot on April 30, 2021.
Image: MOSES MWANGI

Actor Ainea Ojiambo was on Friday night released by police after he was involved in a shooting incident in Nairobi.

Ojiambo, who is known for his role as 'snake' on the 'Makutano Junction' TV series, is a licensed gun holder.

He was granted a police bond as investigations into the shooting incident along Moi Avenue, Nairobi, go on.

A guard and a bystander were shot and seriously wounded in the incident.

The guard was shot in the eye while the second man was hit in the leg after Ojiambo fired as he struggled with a gang of three who had tried to rob him of his gold chain.

The incident happened on Friday at about 4.30pm as Ojiambo engaged a woman in a conversation.

The area is usually crowded at that time.

CCTV footage that captured the incident showed Ojiambo talking with the woman on a sidewalk before three men approached him and tried to grab his gold chain.

One grabbed the chain as the others pushed the woman in the confusion.

He quickly reacted, shoved them aside and pulled out his gun from a hoist and discharged as the three attackers scampered for safety.

The video showed him reach for the neck chain that apparently fell on the ground and a face mask before he returned the pistol to safety.

It was then he realized the bullets he discharged had hit a guard who was seated few meters away and a bystander.

The three men who tried to violently grab the chain managed to escape in the confusion.

Friends of Ojiambo who is also known as “OJ” said he felt sorry after learning he missed the target and instead hit innocent people.

Police arrived at the scene moments later and saved Ojiambo from angry crowd that wanted to lynch him.

They accused him of being trigger happy.

But Ojiambo explained to them he was aiming at a gang that had attacked him.

It forced police to lob teargas canisters at the mob that had turned violent seeking to lynch the man before he was whisked away to Central police station.

The injured were rushed to hospital in serious condition.

Police said on Friday evening there was not a premeditated intention by Ojiambo to shoot the victims and that he was acting in self defence.

“He fired two bullets which missed his targets and instead hit two other people. The matter is being looked into for now,” said an officer who is aware of the probe.

His pistol was taken away for forensic analysis. Police said they recovered spent cartridges from the scene. His lawyer Cliff Ombeta arrived at the station and engaged the officers giving an undertaking to produce Ojiambo if and when needed.

Ojiambo reported to the station on Saturday as a follow up to the probe that is ongoing.

The officers said they were consulting on the way forward on the incident.

The incident highlighted a growing concern over rising incidents of violent crimes that are creeping back to the city in the past months.

Cases of violent muggings are on the rise in the city as police struggle to contain them.

A senior police officer said a plan to address the menace had been drawn and implementation is ongoing. Thugs have been roaming in parts of the city, robbing pedestrians in broad daylight.