Experts say those seeking amendments are pushing BBI for a fall.

• The Senate is keen on amending the Bill, setting the stage for questions on the authenticity of the Bill approved or rejected by Parliament 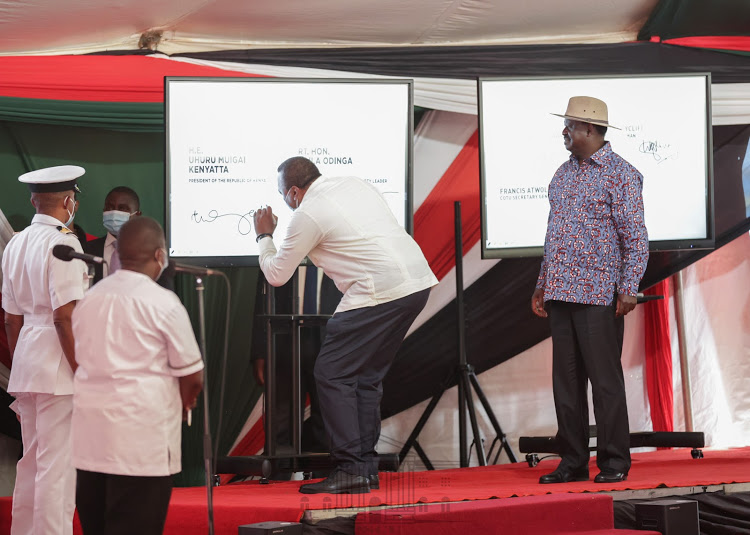 President Uhuru Kenyatta and ODM leader Raila Odinga lead Kenyans in collection of signatures for the BBI process during the launch at KICC on November 25, 2020.
Image: PSCU

A lack of consensus on what would happen should MPs amend the BBI Bill to correct errors in the document is threatening the law change process.

Senators on Thursday sought to change the document to save the embarrassment of presenting an error-filled document to the people for a referendum.

The National Assembly, on the other hand, appears to have resolved to pass the Bill as was presented by the promoters.

For the Senate, joint JLAC co-chair Okongo Omogeni (Nyamira Senator) proposed to the House “to take legislative action to correct errors of form that appear in the Bill.”

He said the Majority leader has an option of moving an amendment to correct the error of form.

The senator said President Uhuru Kenyatta and ODM leader Raila Odinga “who are the owners of the handshake will not kill any of us [them] if we correct this mistake.”

“Experts said if we identify an error of form, we can correct those errors. I am not the author of the errors. I want this House to note that the Bill at the National Assembly does not have these errors.”

Omogeni said the errors are in reference to the Bill that was read before the Senate hence the task of correcting it rests with that House.

“How will we look in the eyes of Kenyans if we consider a Bill that has typing errors, and fail in our duty as members of the Senate in correcting this simple error?” he asked.

Ndaragwa MP Jeremiah Kioni countered the narrative saying the role of Parliament is to say yes or no.

“Even when we [MPs] say yes, the Bill moves to the IEBC. If they [senators] are amending, they are saying no.”

Kioni said it will be unwise for senators to say they have the wrong Bill yet “they are only 10 metres away, hence can walk over to get the correct Bill”.

“How can a joint committee claim to have sat and considered different Bills? They must have introduced the wrong ones themselves,” Kioni said.

The lawyer said that in his view, one Bill belongs to Uhuru, another to Raila, and the other to ‘the deep state.’

“Omogeni has been opposed to the BBI process ab initio so we don’t expect him to support it now.”

Constitutional experts say there is a problem not only with the Bill and how it has been handled so far but also with the legality of Parliament.

Former MP Abdikadir Mohamed, lawyers Ekuru Aukot and Bobby Mkangi – all former members of the committee of experts that midwifed the Constitution – said there was a problem with the two Houses passing what is considered different versions of the BBI Bill.

Mkangi said: “Debating different Bills will throw the entire exercise into shambles because they are supposed to be determining one Bill. The fact that they are already looking at two versions, I suspect people are waiting to rush to court to have the exercise nullified.”

“I suspect that the approaches are strategic towards scuttling the whole process. The Senate proclaiming it is looking at a different Bill is dangerous enough. If they go forth to amend it, that will be another layer of traps,” the lawyer said.

Abdikadir said Parliament is supposed to pass or reject a similar Bill.

He said the Houses' powers to instigate amendments are hinged on whether the initiative is popular or not.

The former MP says the BBI Bill is not a process of amendment by popular initiative.

He thus argues that senators or Parliament generally can do as it pleases since the Bill does not fit the definition of one under a popular initiative.

“The procedure that was followed was not the one intended in the Constitution. Nothing, therefore, stops Parliament from doing whatever it wants with the Bill,” the expert told the Star on the phone.

“Who are the citizens proposing this Bill? Popular mandate means a group of concerned citizens coming together, either through organised groups, NGOs or individually.”

Abidkadir said that since in his consideration the Bill is not driven under a popular mandate, Parliament can access the document and the typos can be sorted out as part of the process.

However, he holds that there would be substantial conflict in the Bill providing for additional constituencies without amending the provisions giving the IEBC powers to delimit constituency boundaries.

“Anyone can go to court and say the power rested with the IEBC when the Bill was passed. If you can see that conflict right now, why not correct it?” the expert asked.

If you can see that conflict right now, why not correct it?

Aukot said Parliament as currently constituted has no legitimacy on account of failing to pass the gender laws as stipulated in the fifth schedule.

“Parliament cannot say it is properly instituted. They cannot debate or pass any law going by the provisions of Article 261 (7).”

The PSC has challenged in court an advisory by former Chief Justice David Maraga asking the President to dissolve Parliament.

Aukot – who was behind the Punguza Mzigo initiative – says Parliament has violated the Constitution based on the reference provision of the law.

Further, he argues that the Bill MPs are debating remains unclear in the face of reports there are several versions of the BBI document.

“What Bill are they debating? Which Bill went to which county assembly? We can now confirm 13 got a different Bill from what others got therefore whatever Bill came to Parliament does not meet the threshold of county assemblies having passed a Bill. There is illegality and a question of authenticity,” Aukot said.

“Do MPs have the capacity to correct or amend this Bill? No, they don’t. Was this process at the onset a constitutional amendment Bill as stipulated in Articles 255, 256, and 257? The answer is no. This thing started as a handshake. It was an illegality, a political con game and a big lie.”

Aukot said the BBI process does not pass the constitutional test if compared with his Punguza Mzigo, which failed to get the required 24 counties.

“It is an illegitimate illegal process being discussed by an illegal institution. Since we don’t know which Bill we are talking about, what will they be presenting to Kenyans for the referendum?” he asked.

The lawyer said that in his view, one Bill belongs to Uhuru, another to Raila, and the other to ‘the deep state.’

“Raila and Uhuru Kenyatta are playing their bases. I don’t think they had any intention of amending the constitution, they were managing the politics to safeguard their interests. Even Raila’s base is being lied to,” Aukot said.

Senate and the National Assembly are scheduled to continue with the debate on the Bill next week.

The plan involves mounting legal battles in court and calling for street protests.
News
5 months ago