Group says Kenyans should be assured of proper healthcare, calls for an end to extrajudicial killings 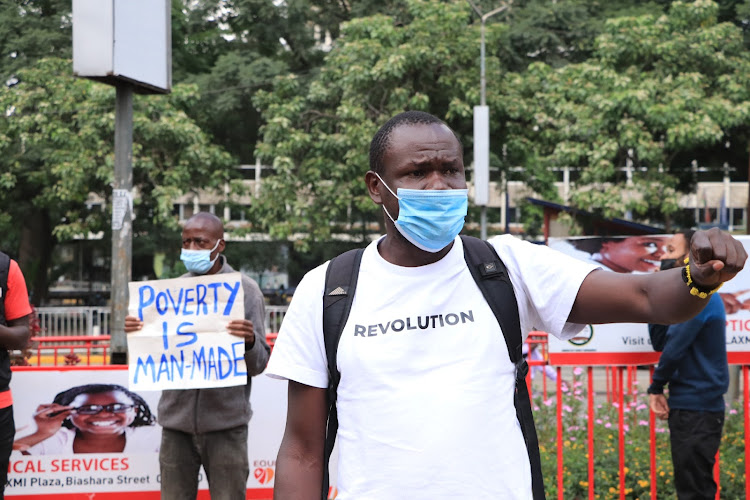 Human rights activist and convener of the social justice movement Wilfred Olal during a demonstration near the National Archives in Nairobi on Friday, April 30, 2021
Image: WILFRED NYANGARESI

A group of workers, artists and human rights defenders took to the streets on Friday protesting against police brutality and lockdown measures in Nairobi and four other counties.

The demo was however cut short by police who dispersed the crowd at the National Archives for the planned march to State House.

The demonstrators accused the government of neglecting its citizens' basic needs and workers who they said were adversely affected by the lockdown.

President Uhuru Kenyatta has since lifted the lockdown that was imposed in Nairobi, Kiambu, Nakuru, Kajiado and Machakos counties in deescalation of measures announced on Saturday.

The demonstrators had blamed security officers for using excessive force on violators of curfew rules.

Dandora Social Justice Center leader Wilfred Olal said that even though workers toil all day, the lockdown had made it impossible for them to reap the fruits of their labour.

“The poor are suffering while life continues normally for a few people in power. No matter how hard we work, we get nothing out of it,” Olal said.

The group later issues a statement demanding immediate lifting of partial lockdown and the dusk to dawn curfew.

A day later, Uhuru lifted the lockdown and pushed curfews hours from between 8pm and 4am previously to between 10pm and 4am in the new measures.

The President also allowed bars to operate but they will be required to close by 7pm.

The activists had demanded the provision of food, end of police brutality and killings, access to free and quality healthcare, access to clean and safe drinking water and decent housing for everyone.

They also wanted the government to formulate mechanisms to help end gender-based violence, provide menstrual hygiene products and also scrap the increased levies on fuel and other basic items.

“It is without a doubt that life is becoming increasingly unbearable for Kenyans. Besides massive job losses and terrible economic crisis due to state mismanagement and corruption, we are faced with acute water shortage, with cases of police killings and brutality on the increase,” Olal said.

He said a majority of Kenyans cannot access proper medical services while rent and food remain unaffordable due to an increase in taxes.

“The lockdown and expansion of state repression threaten the limited democratic rights and the Covid-19 pandemic endangers the health and lives of many people.”