•In June 2017 Central Bank of Kenya (CBK) acknowledged the possibility of a transnational fake currency ring in Nairobi and the region. 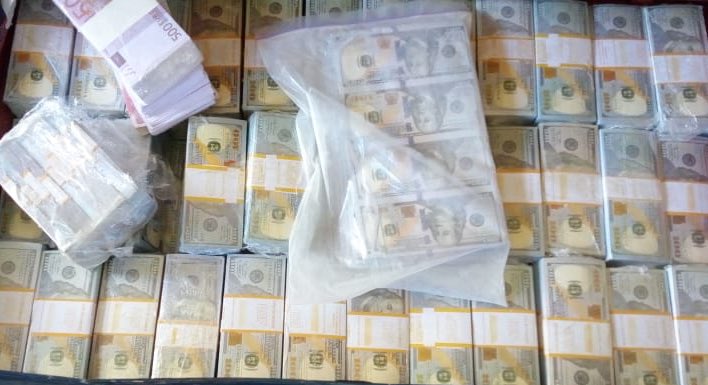 EXTENSIVE CARTEL: Fake currency recovered by police in a past raid
Image: COURTESY

Two men were on Tuesday night arrested after they were found in possession of fake currencies worth Sh750 million.

The men identified as Samuel Maina and Boniface Mungai were arrested from an apartment in Kilimani area where they had kept the fake papers in Kenyan, US and Euro bills.

Police said the fake money recovered was in US Dollars of 100 bills amounting to 6,820,000 US Dollars, fake Euros 100 bills totaling to 490,000 Euros and fake Kenya shillings note of 1000 denomination totaling Sh6.4 million.

Police suspect the men were planning to con unsuspecting customer or banks.

Nairobi police boss Augustine Nthumbi said they are investigating to establish if any of the fake currency had circulated into the market.

“We warn anyone against handling such money. It is criminal and has a bad impact on the economy,” he said.

Dozens of suspects have in the past years been arrested in connection with the incidents and charged in court.

In September 2019, Sh300 million fake money was found abandoned on the roadside along Ngong Road, Nairobi.

In May 2019, nine suspects were arrested in Kilimani area and fake Sh190 million ($1.9M) recovered from them.

In June 2017 Central Bank of Kenya (CBK) acknowledged the possibility of a transnational fake currency ring in Nairobi and the region.