Ruto woos diaspora to stay ahead of rivals in 2022 battle

He has begun a clear, inclusive and structured engagement to concretise hustler nation's broad and solid plans

• He has promised to create a full-fledged ministry dedicated to diaspora matters.

• Kenya has slightly over three million people in the diaspora. 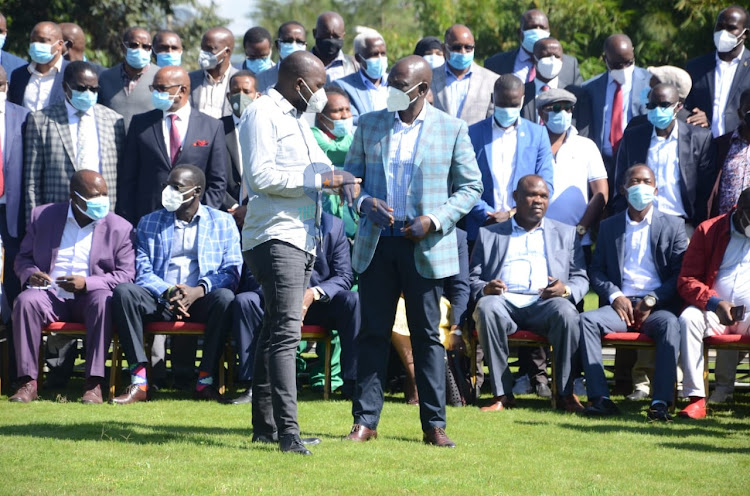 Deputy President William Ruto has defied the political lull imposed due to Covid-19 to try to stay ahead of the game in the 2022 presidential contest.

Days after he assembled an economic think tank comprising retired President Mwai Kibaki era economists, Ruto appears to be increasingly pulling fast ones on his competitors.

On Sunday night, Ruto held a six-hour virtual meeting with some Kenyans in the USA, Middle East, South Africa and Australia as he moved to charm the diaspora.

During the session, he promised to create a full-fledged ministry that will be dedicated to diaspora matters.

"It is time we had a fully dedicated ministry for diaspora just like the way we have a ministry for devolution. The ministry will be addressing all the challenges facing Kenyans in every part of the world," he said.

The DP said with the diaspora remittances at Sh360 billion annually, Kenyans living abroad deserve a ministry just like the Devolution docket, which oversees almost an equal amount for counties.

Kenya has slightly over three million people in the diaspora.

Ruto said he had begun a clear, inclusive and structured engagement to concretise and execute the hustler nation's broad and solid plans that will make Kenya a better and fairer country for everyone.

“We recognise the critical and huge contribution — both economically and intellectually — that Kenyans in the diaspora make in the development of our country,” he said during the virtual meeting.

Ruto revealed that his administration would create a benevolent fund dedicated to helping bereaved families bring back home bodies of their relatives who die abroad.

He also promised to ensure passport and visa regimes are overhauled if voted in.

This would address logistical nightmares that have been identified in the past, especially in the USA, where Kenyans have to travel from other states to be served in Washington DC.

The DP also pledged to push for a radical review of the current National Social Security Fund and the National Hospital Insurance Fund to include the diaspora.

The DP laid bare his plans for the diaspora and fought off claims of promising too much when he has 'failed' to deliver while serving as deputy president.

The diaspora had sought to know what he will do differently if elected and why he had not implemented the same being the country's second in command.

“Many of you will tell me that Mr Ruto you are the Deputy President. From the position I am, I can clearly see that there is a path ahead that gives us an opportunity to change the course and destiny of our nation."

The diaspora representatives wanted to know if the Independent Electoral and Boundaries Commission would enable those outside Africa to vote digitally.

"My question to you honourable deputy president is that in your position today, is it possible to invite Safaricom and other telco companies to collaborate with the IEBC in making this a reality for the diaspora community outside Africa?" Antony Thuo from Boston asked.

The IEBC is required by law to ensure that eligible Kenyans in the diaspora register and vote in general elections.

However, the commission is yet to roll out a roadmap that would capture the more than three million voters.

In 2017, only 2,825 Kenyans in Burundi, Uganda, Rwanda, South Africa and Tanzania voted in an election restricted to only the five countries in the diaspora.

In 2020, Kenyans in diaspora sent home a total of Sh330.6 billion, just Sh40 billion shy of the total share of national revenue for the 47 county governments.

Former Kakamega Senator Boni Khalwale, who sits in Ruto's political think-tank, revealed that the agenda of the DP's meetings was aimed at selling his hustler nation's economic strategy.

“Previously, such sessions have been nothing except political posturing by presidential candidates when fundraising. Ours is about articulating issues, policies and programmes,” he said.

Analysts say the DP has changed tack from highly-charged countrywide meetings due to the Covid-19 restrictions to virtual and hosting of delegations.

Political risk analyst Dismas Mokua said the DP is scheming to be a formidable force in the 2022 presidential battle through “top of the mind awareness and strategic visibility.”

“I find the DP's decision to keep the company of key players in various sectors including influential Kibaki era economists quite telling. He is a man determined to turn the tables on his rivals,” he said.

Mokua said the DP has gone flat out to devise ingenious ways to put his 2022 presidential campaigns on track while at the same time ensuring he does not violate the Covid-19 restrictions.

“Without strategic visibility, voters will forget anything about a politician,” he said.

Other members of the team being to be brought on board include Dr Jason Kapkirwok, Prof Larry Gumbe and Prof Raphael Munavu.

The DP on Saturday held a meeting with leading and popular musicians who are influential in the entertainment industry.

The DP has promised to revolutionalise the county's economy by adopting a bottom-up approach that will seek to empower lower economic strata to spur growth.

The empowerment, Ruto has argued, would include providing access to credit for the hustlers to start small income generating businesses so as to bring the over 17 million jobless Kenyans into the tax bracket.

According to the DP's bottom-up economic approach, taxation revenues would  be used to invest in infrastructural development to spur growth across the country.