Uhuru said such partnerships form the foundation of making Kenya an industrialised nation.

•The president spoke on Monday when he opened a nanotechnology and semiconductor manufacturing facility at Dedan Kimathi University of Technology in Nyeri County. 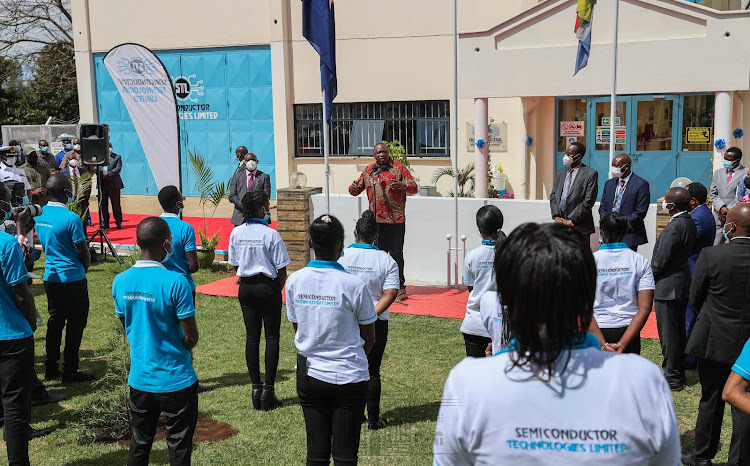 President Uhuru Kenyatta when he opened a nanotechnology and semiconductor manufacturing facility at Dedan Kimathi University of Technology in Nyeri County.
Image: PSCU

President Uhuru Kenyatta has reiterated the importance of public-private partnerships (PPP) in advancing the government’s manufacturing pillar of the Big 4 Agenda.

The president spoke on Monday when he opened a nanotechnology and semiconductor manufacturing facility at Dedan Kimathi University of Technology in Nyeri County.

Uhuru said such factories form the foundation of making Kenya an industrialised nation.

"This is the dream some of us have for this country, our ability to become an industrialised nation, to be able to create good quality and well paying jobs for our young people," the President said.

He noted that it was unique companies established by Kenyans like STL that will transform Kenya from a country that consumes products from other parts of the world to one that exports not only its products but also its technology across the globe.

The Head of State recalled that recently he launched a weapons factory which will save the country millions of tax-payers money every year as part of the Government’s effort to produce and consume locally manufactured goods.

"By producing locally, we are not only saving money but also creating well-paying jobs for our young people," President Kenyatta said.

He further disclosed that he will soon launch a ship-building enterprise in Mombasa, adding that the country is also getting back to assembling motor vehicles locally as used to happen in the past.

"I believe this is the vision that we all need to work on as we work on all the infrastructure, generating sufficient power, building roads and putting fibre networks," Uhuru said.

He added, "We are doing all this so that we can attract industries such as this one in order to create employment, create hope and give opportunity especially to the young people of this country."

The University’s collaboration with STL in this manufacturing venture is geared towards supporting the Government’s policy of “Buy Kenya, Build Kenya” initiative.