Leading cause of sickness and death; among top 10 causes of outpatient visits

• Community case management of malaria is one of the new approaches adopted by malaria-endemic countries to reduce its burden among vulnerable populations. 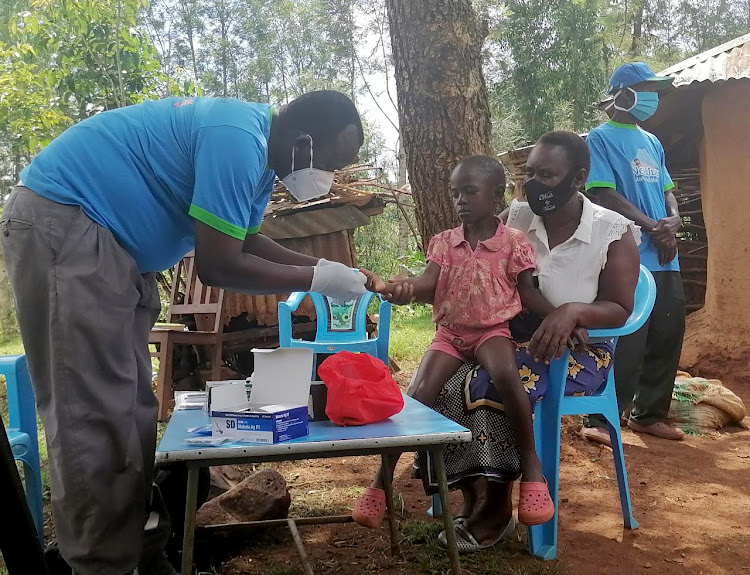 Millicent Akinyi Omira 36 year old with her four year old son Hassan Odhiambo outside their house in Gem Siaya county. His son is being tested for Malaria by a Community Health Volunteer.
Image: FAITH MATETE

A 36-year-old mother of five cannot hide her joy seeing her son being tested for malaria outside her house in Gem, Siaya county.

Millicent Akinyi Omira’s four-year-old son Hassan Odhiambo has been unwell for days but she did not know he was suffering from malaria.

“He has not been eating well and felt weak and because I had no money to take him for a test at the nearest health facility, I decided to give him painkillers and monitor him first as I looked for money,” she says.

However, a community health volunteer arrives and asks about the sick child from the house. Millicent is sitting outside her house.

“I called Hassan and told her all the symptoms he was having and he immediately performed a test using the Rapid Diagnostic Test Kit. He pricked his middle finger, drew blood and placed it on the strip. After some few minutes, the reading was positive for malaria and he was given drugs immediately,” she says.

Millicent terms it as God’s work as her son is treated for free and even given medicine at the comfort of their house. She says this is a relief, adding that the initiative will go a long way in assisting the community members in need of such help.

They have been walking long distances to the nearest health facilities—a tedious journey.

Through the Global Fund grant, Amref Health Africa, together with the Division of National Malaria Programme, has been implementing a community case management of malaria model in 10 counties in Nyanza and Western regions since 2012. This is meant to reduce the burden of malaria among vulnerable populations.

Eight of the counties fall within the malaria lake endemic zone, while two are in the highlands epidemic-prone zone. Bungoma, Busia, Kakamega, Vihiga, Kisumu, Siaya, Homa Bay and Migori are in the former, and Kisii and Nyamira in the latter.

Multiple factors related to affordability, acceptability and availability influence the level of access to prompt and effective malaria treatment among the poor.

CCMm delivered by CHVs has had the potential to reduce such barriers through reduced costs associated with fever treatment (free services, free drugs, no transport required, low opportunity cost), interaction with a fellow community member who understands the family’s situation, availability of caregivers outside normal ‘business hours’ and frequent follow-ups.

According to Abigael Oduor, who coordinates community health services within Gem subcounty, the CHVs are able to test for malaria and treat if results come out positive or refer patients if results are negative.

Oduor says the CHVs do daily household visitation and check a number of things, including if a family uses a mosquito net and if it’s hanged the right way. They also provide general health education.

“Malaria Rapid Diagnostic Test kits that they have, they use Arthemeter Lumefantrine, which they normally get from their link facilities—in this case, Yala subcounty hospital—for treatment of malaria.”

In getting the kits, a community health assistant orders from the facility and distributes them to the CHVs who account for the items in a community monthly report they submit. Oduor adds that on treatment, the CHVs have been trained in the dosing schedule for AL according to different age groups.

Eunice Oreru, Siaya county malaria coordinator, says 2,148 CHVs are involved in malaria case management. They were trained in 2016 and have received refresher courses in the last three years, with each subcounty having its own volunteers.

“This has been very effective because the CHVs are covering the areas in which they reside or have grown up, and know most of the people and everyday activities within their areas,” she says.

Oreru says malaria is one of the leading causes of illness and death in Siaya, hence they are implementing other strategies to ensure prevalence is reduced.

According to World Health Organization, CCMm is based on the evidence that well-trained and supervised CHVs can provide prompt and adequate treatment for fever within 24 hours to reduce morbidity and mortality associated with malaria in Africa.

There has been growing evidence on the effectiveness of CCMm globally, an indication that access to effective malaria treatment improves when it is provided by CHVs, particularly in areas where families face barriers to accessing health facilities. 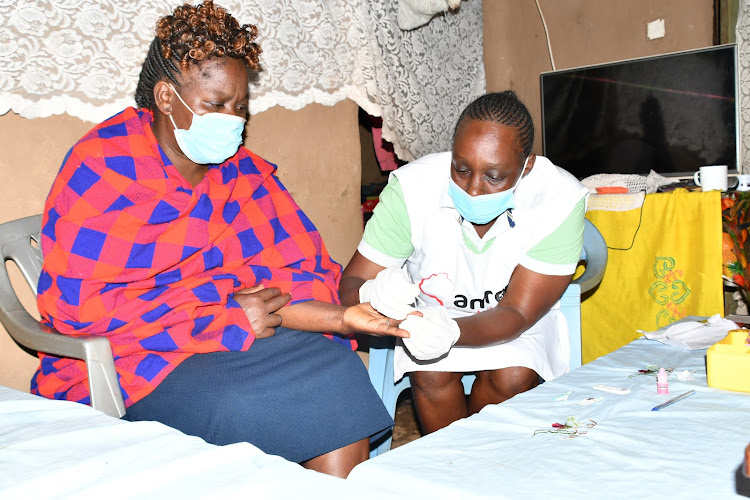 In Kakamega county Lurembe in Ikolomani constituency, Tabitha Kasala is being tested for malaria by a community health volunteer Wilfred Luyeku inside her house
Image: FAITH MATETE

At Lurembe in Ikolomani, Kakamega county, Tabitha Kasala feels weak. She has fever and cold and has thus sent her child to call their neighbour, who is a CHV, to attend to her.

Tabitha says she has malaria symptoms. CHV Wilfred Luyeku reaches her place, tests her and the result is positive. She is given Arthemeter Lumefantrine.

Luyeku, who is attached to Iguhu facility where referrals of extreme cases are made, handles 100 households within Lurembe.

Tabitha says the provision of the services at the community level is good news to them as it saves them the agony of walking several kilometres to health facilities.

Kakamega malaria programme officer Faustinah Sakari says that in 2020 the county tested nearly 1.5 million suspected cases of malaria, of which 523,000 were confirmed, with four people dying.

Tatuli Simwa, a clinical officer attached to Mukunga health facility in Kakamega, notes that they receive many patients with signs and symptoms of severe malaria and with the interventions, they have been able to diagnose promptly and treat patients. “The health workers have been trained in how to carry out a prompt diagnosis of severe malaria.”

On the burden of the disease at the facility, he says that last month they had more than 400 cases of uncomplicated malaria.

“The cases are many. The interventions are working, we used to have so many admissions in the wards, but now we have two for under-fives and one for over-fives. There is also a reduced number of admissions.

“From the numbers we used to receive at the facility compared to what we receive currently, there is an indication that the trend is going down and the measures put in place are working,” Simwa says.

Malaria kills more than 400,000 people a year, mostly being children in sub-Saharan Africa.

It remains a major public health concern in Kenya. Besides being the leading cause of morbidity and mortality in the country, it is listed among the top 10 causes of outpatient visits countrywide.

However, the burden of malaria in Kenya is not uniform as it is highest in the eight counties around Lake Victoria, a region that accounts for 70 per cent of the 6.5 million cases nationally.

While children and pregnant women are the most vulnerable, the malaria burden impacts various sectors, including agriculture, education, commerce, and other socio-economic activities. With the national prevalence standing at eight per cent, malaria continues to hurt economic growth and the overall development agenda.

However, there is hope that the fight will be won even as researchers have unveiled a possible vaccine following a trial that was carried out in Burkina Faso by scientists at the University of Oxford in the UK. R21/Matrix-M showed up to 77 per cent efficacy in the year-long trial of 450 children.

The scientist, also one of the lead researchers behind the Oxford-AstraZeneca Covid-19 vaccine, plans to conduct final-stage trials involving 4,800 children aged between five months and three years in four African countries. They are led by Adrian Hill, director of Oxford’s Jenner Institute.

According to Ashley Birkett, Global Head, Malaria, PATH Centre for Vaccine Innovation and Access, the results shared are encouraging even though the paper has yet to be formally published.

Birkett said they also look forward to learning more once there is a Phase 3 trial.

"We also look forward to seeing data on compatibility with other vaccines. These Phase 2 trial results signal the possible future availability of additional vaccines to help meet the potential demand for childhood malaria vaccines in Africa."

Birkett noted that given the need for continuing investments in malaria control, they always welcome positive data on new malaria tools, including potential vaccines.

"As noted, we recognise the need for larger-scale testing for potential new vaccines and other interventions."

Asked what he foresees in the vaccine viability in efforts to reduce the prevalence and any other take concerning the topic, Birkett said it remains to be seen whether reductions in prevalence could be achieved by only vaccinating young children.

"Likely we would need a vaccine in the future that also targets older children and adults; while these groups typically don’t get as sick, they do contribute significantly to maintaining parasite transmission in communities. This needs to be addressed to reduce the prevalence and the drive towards elimination."

Post a comment
WATCH: The latest videos from the Star
by FAITH MATETE Correspondent, Kisumu
News
25 April 2021 - 23:00
Read The E-Paper