WHO is testing its safety profile, and rollout in real life settings

•The vaccine, launched in Kenya in September 2019, reduces a child’s chance of contracting malaria by about 40 per cent.

•About 450,000 doses have been administered so far in Homa Bay, Kisumu, Migori, Siaya, Busia, Bungoma, Vihiga, and Kakamega counties. 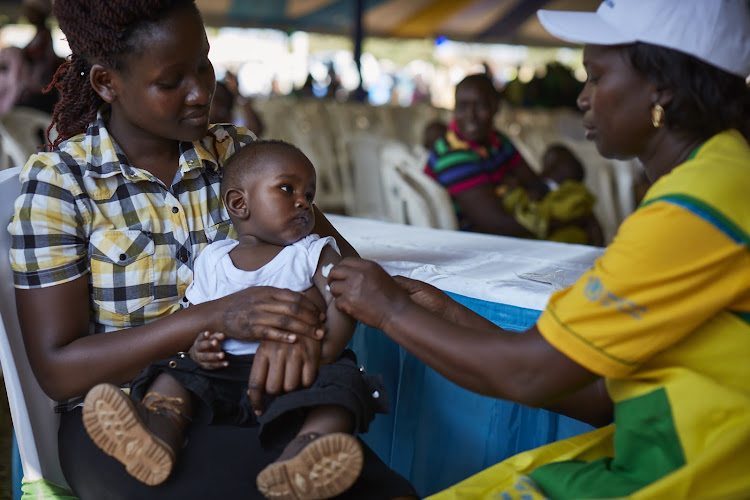 A child receives the RTS,S malaria vaccine during the rollout in Western Kenya.
Image: PATH

At least 190,000 children in eight counties have received their first dose of the malaria vaccine.

The jab, launched in Kenya in September 2019, reduces a child’s chance of contracting malaria by about 40 per cent.

It is being administered in a four-year piloting scheme to establish its safety and feasibility of rollout in local health contexts.

The World Health Organization on Wednesday said its experts will pore on the data being collected in October to consider whether to recommend wider use of the vaccine.

“The number of children reached in this relatively short period indicates strong community demand for the vaccine,” the WHO said in a statement.

Known as RTS,S or by brand name Mosquirix, this is the world’s first and only registered malaria vaccine.

Children get the first dose at six months, the second dose at seven months, the third dose at nine months and the fourth dose at 24 months of age.

About 450,000 doses have been administered so far in Homa Bay, Kisumu, Migori, Siaya, Busia, Bungoma, Vihiga, and Kakamega counties.

“We applaud the work of participating countries that have resulted in malaria vaccine pilots with strong vaccination coverage that will add to our understanding of the RTS,S vaccine’s potential to improve child health and strengthen malaria control – and, potentially, reverse trends,” said Dr Akpaka Kalu, team leader for tropical and vector-borne diseases in the WHO African region.

The WHO said in total 650,000 children have received at least one jab in the pilot scheme in Kenya, and in Malawi and Ghana - who are also participating in the pilot.

Although the vaccine successfully completed phase III testing in 2014, children who received Mosquirix had a risk of meningitis 10 times higher than those who received a control vaccine.

The WHO said Mosquirix may not have triggered the meningitis cases but recommended the ongoing four-year pilot to establish its safety and also rollout challenges in real-life settings.

There are an estimated 3.5 million new clinical cases of malaria and 10,700 deaths each year, mostly in young children, according to the Ministry of Health.

“Ghana, Kenya and Malawi show that existing childhood vaccination platforms can effectively deliver the malaria vaccine to children, some of whom have not been able to access an insecticide-treated bed net or other malaria prevention measures,” said Kate O’Brien, WHO director of the department of immunisation, vaccines and biologicals.

Experts say completing the four doses of the vaccine offers the best protection against malaria when used with other prevention measures.

The current pilot is coordinated by the WHO and supported by in-country and international partners, including Path, Unicef, and GSK, which is donating up to 10 million doses of the vaccine for the pilot.

Learn about the pilot implementation of RTS,S and why it is a critical next step.