Thought he cheated with M-Pesa girl, couldn't' kill her, then drugged husband and had him strangled, hanged from a tree.

• Court convicts Muthoni of murder, hiring three men to kill her husband in 2016. Grisly tale of repeated efforts. Finally drugged him herself but it wore off and killers strangled him.

• Sentencing will be on May 18. She can appeal. 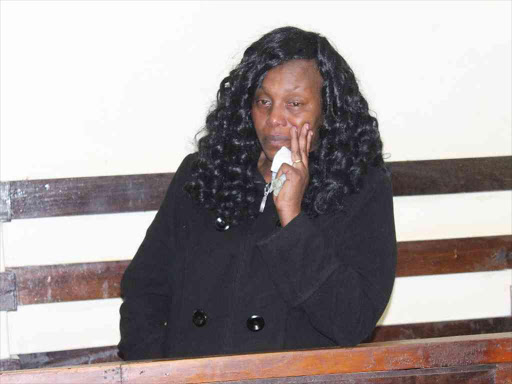 A teacher and former headmistress has been convicted of murdering her school principal husband, hiring three men to kill him and hang him from a tree.

She was sure he was unfaithful with a girl in an M-Pesa shop but there were too many police at their nearby station and a bank.

So Jane Muthoni decided her husband, Solomon Mwangi, had to die and she hired three men to help her. She finally decided to drug him herself and failed once.

She succeeded a second time and was to hand her husband over to killers. But the drug was wearing off.

He asked her why she didn't just kill him herself, run him over with her car.

On Thursday, Nakuru High Court judge Joel Ngugi found Muthoni guilty of murdering her husband, Solomon Mwangi, the principal of Kiru Boys High School between November 6 and 11, 2016. She can appeal.

The mother of three is the former headmistress of Icaciri Secondary School in Kiambu.

Also convicted was one of the three men, Isaac Ng'ang'a, alias Gikuyu.

They will be sentenced on May 18.

Judge Ngugi said in June 2016, Muthoni hatched "a brutal, chilling and cold-blooded" plan that took at least six months to execute as there were several failures.

Muthoni was charged together with Isaac Ng'ang'a, alias Gikuyu, Nelson Njiru who is still on the run and Joseph Njuguna Kariuki who confessed to the murder.

Kairiuki, who gave a blow-by-blow account of Mwangi’s murder, said Sh100,000 cash was meant as down payment for the murder. The Sh300,000 balance to be paid later.

He said in June 2015 he received a call from a woman identified as Damaris, a long-time acquaintance who said there was a well-paying job for him.

He met a day later at Tree Shade Hotel in Kimbo with a man called Njiru and Damaris. They said the headteacher's wife, identified as Mwalimu, was behind the planned execution and had already paid Sh100,000.

Their mission: kill an M-Pesa attendant at a shop in Kirin-ini. The presumed lover. There were said to be love texts on their phones.

The following day, Njuguna was picked up by Njiru who was driving a Toyota Sienta. In the passenger seat was Muthoni, aka Mwalimu. They were supposed to  wait for Gikuyu. Njiru drove Muthoni to Kiambu and returned alone.

The mission failed because it would be difficult to kill the girl since the shop was near Kiria-ini police station and a bank, both well guarded.

At midday, the men went to the shop, saw the girl, bought three sodas and left.

Two days later at the Tree Shade Hotel, they told Mwalimu they couldn't get away with killing the girl. Mwalimu gave Njiru Sh100,000 to share.

Muthoni had another plan - murder her husband.

“On November 4, 2016, I met with another man known as Gikuyu at Texas Bar in Kiria-ini. We were joined by Njiru and Mwalimu who informed us that she had a new plan of poisoning her husband," Kariuki said.

She told them to meet her the next day at Urithi near Ndarugo, he said.

Muthoni would spike his drink at the teacher's quarters at the boys' school. After the drug took effect, Kariuki and Gikuyu would enter and strangle him to death.

Muthoni drove to the school compound, the killers hidden behind tinted windows. She chatted with her husband and they went to his residence.

After some time, Mwalimu returned with bad news. She had failed, the drugged water turned "dirty" and when she spiked his tea, the drug didn't work.

Muthoni told her husband she was leaving to buy food. She drove to Othaya town in Nyeri where Muthoni left them. She returned to her husband's house with potato chips.

The court was told that on November 6, a Sunday, Muthoni called the killers with instructions to meet at Urithi, near Ndarugo in Kiambu.

She had picked her husband the night before from school and they spent the night at her house in Kiambu.

They were to see a plot for sale and meet the sellers.

That night Muthoni succeeded in drugging her husband and the following day she drove the weakened man to his killers.

Mwangi was dozing off and after he alighted from the car, the same Toyoya Sienta, he went back inside almost immediately.

Muthoni then scolded him for being “too cowardly to finish the job”.

He said she should kill him herself by running him over with her car, but Muthoni was angered and she drove off without saying a word.

She returned shortly to the same spot and said she had already drugged her husband and she could not go back to school with him in that condition.

The drugs were wearing off and Mwangi said he was running late.

Njuguna and Gikuyu got into the car. Mwangi was in the front passenger seat.

Muthoni drove them to a forest, stopped, and said in Kikuyu: “Ni hau,” meaning “It’s here.

Gikuyu took a sisal rope from under the seat and, from behind, suddenly put it round Mwangi’s neck. They jointly dragged him from the car.

They left Mwalimu behind as they took their victim and took Mwangi deep into the woods, tied up his hands, tightened the rope on his neck and hanged him on a tree limb.

Gikuyu wrapped the body in gunny bags. The court was told Gikuyu removed his gumboots, hid them in the bush and put on Mwangi's sports shoes.

Mwalimu stayed in the car.

He said when they returned, Mwalimu was gone. They failed to trace her for the balance of Sh300,000 because her phone was off.

Mwangi's body was found eight days later in a coffee plantation. The government chemist said Xylazie, a drug used to sedate animals, was found in Mwangi's liver, kidney and stomach.

The case was closed after the testimony of the investigating officer who demonstrated the connection between the widow, Muthoni and Gikuyu.

When she appeared in court, Muthoni said the marriage was perfect and the separated couple were trying to be transferred together.

She sobbed uncontrollably and told journalists she was suffering from the loss of her husband and prayed the perpetrators were punished.

Muthoni said her marriage was "stable and founded on formidable principles of mutual love, care, trust, and understanding.

"My husband had never had an extra-marital affair or brought another woman into our matrimonial home," she told court.

Muthoni blamed a car dealer she identified as Samuel Karanja who was to import vehicles for the family. She said he could have killed her husband after squandering his Sh1.5million but failed to deliver.

She further told the court that her husband reported death threats from Karanja at the Kiriaini police station on November 1, 2016, a few days before his disappearance and murder.

In yet another crafty defence, Muthoni pointed detectives to her husband’s fellow principals whom she claimed were unhappy with his transfer.

She said it was the cartel that orchestrated Mwangi's death after he refused to play their game.

Muthoni claimed that the cartel had demanded Sh1 million from them to facilitate their transfers to schools of their choice.

Testimony from an M-Pesa shop attendant who Muthoni had accused of having an affair with her husband told court Mwalimu had threatened her many times over an alleged love affair.

While denying having an affair with Mwangi, the woman, 28, displayed in court text messages sent to her by Jane Muthoni warning her to keep off the husband.

Another witness, Damaris, also confirmed that Muthoni suspected that her husband was unfaithful and had recruited her together with another, to retrieve the deceased's text messages with the M-Pesa woman for Sh200,0000.