I'll transform Judiciary by taking it to the public - Dr Wekesa

Says he will mend relationship between the Judiciary and the arms of governments.

• He will also prioritise empowering judicial staff by holding workshops and exchange programs in other countries.

• Dr Wekesa will also get at least 15 scholarships for judiciary staff annually to improve their competencies. 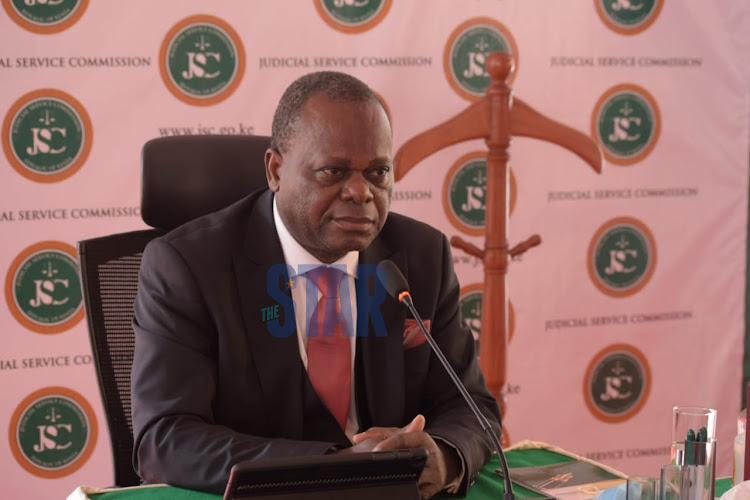 Professor Wekesa Moni during his interview for position of Chief Justice before the Judicial Service Commission panel on April 22, 2021.
Image: CHARLENE MALWA

Dr Moni Wekesa has told the Judicial Service Commission he is a transformative leader who will take the Judiciary to the public if given the chance to become Kenya's next Chief Justice.

Wekesa said will engage with law schools by ensuring that judicial staff will voluntarily teach at least one course and run law programs on local TVs to enlighten Kenyans on what the Judiciary is doing with an aim of getting them to own the institution.

“I will make Judiciary people owned where they have a lot of information about it where they are able to associate with it should we want to know about corruption they will tell us,” he said.

He will also prioritise empowering judicial staff by holding workshops and exchange programs in other countries.

Dr Wekesa will also get at least 15 scholarships for judiciary staff annually to improve their competencies.

He gave an example of how a team he chaired came up with Anti-doping law and agency to curb the doping menace which was threatening the future of Kenyan athletes.

"I am thinking about bodaboda riders,they have a stake in the judiciary I would want us to reach out to them so that they are able to feel that the Judiciary is theirs," he said.

When appointed to office the first thing he will do is to mend relationship between the Judiciary and the other arms of governments.

Dr Wekesa also explained how he decided to study law even after attaining a PHD in education.

He said when he took the national team to Helsinki in 1992 one of the team members punched someone and was arrested.

So the team nominated him to go sort the issue and release the boy and that's when he got interested to study law especially international law.

Wekesa has two doctorates one in Sports and the other one in Law.

Professor Olive Mugenda also wanted to know why he refers to himself as Professor Dr, Dr, Moni Wekesa.

He said he picked that up in Central Europe.