• The revitalised agreement on maritime freight is aimed at repositioning the port of Mombasa as DRC's main exim gateway.

• Uhuru calls for harmonisation of visa regimes between Kenya and DRC to help to ease the movement of people, goods, and services in the region. 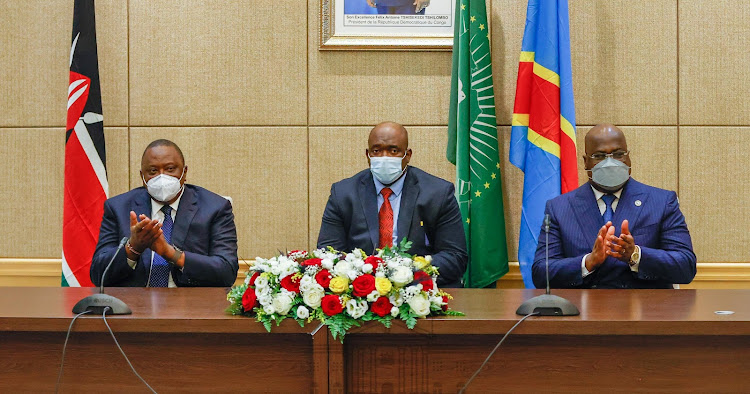 President Uhuru Kenyatta and his DCR counterpart Felix Tshisekedi in a joint press address during the signing of of the agreements on Wednesday, Kinshasa, DRC.
Image: PSCU

Among the four pacts, signed on the second day of President Uhuru Kenyatta's three-day State visit of DRC, is the general cooperation agreement which provides a framework for joint promotion of economic, technical, scientific, and socio-cultural programs.

The economic sectors targeted by the broad framework are agriculture, education, health, sports, and tourism. Others are environment, SME's, housing, energy, and infrastructure development.

Also signed were two separate bilateral agreements on security and defence which provide mechanisms for cooperation between Kenya and DRC in areas such as counterterrorism, immigration, cybersecurity, and customs and border control.

The revitalised agreement on maritime freight is aimed at repositioning the port of Mombasa as DRC's main exim gateway by streamlining the handling of the country's transit cargo.

In a joint press address with his Congolese host Felix Tshisekedi shortly after witnessing the signing of the agreements, Uhuru said the new pacts signifies the strengthening bilateral ties between the two sister nations.

"Indeed the relations between our two countries have been cordial over many decades and the relationship has continued to broaden and deepen especially since you ascended to power in areas of trade, security as well as our multilateral engagements," Uhuru said. 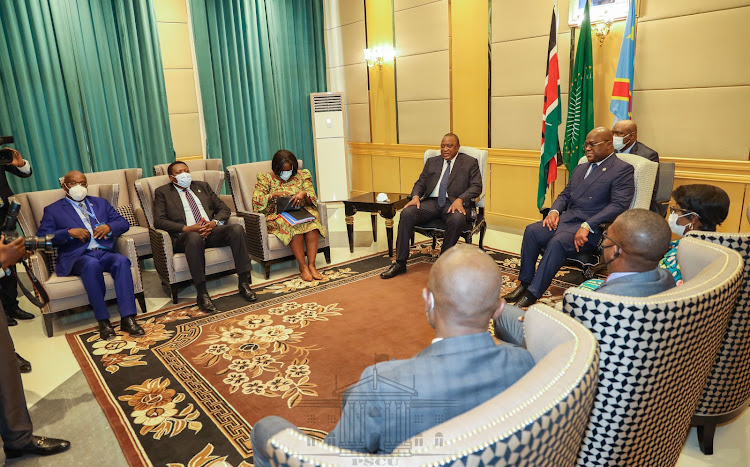 Uhuru announced Kenya's plans to expand its diplomatic footprints in DRC by setting up outposts in Goma and Lubumbashi, which he said will accelerate cooperation in the identified sectors.

"To further deepen the good relationship between our two countries, Kenya is committed to establishing a consulate in Goma as well as an honorary consulate in Lubumbashi.”

He also called for the harmonisation of visa regimes between Kenya and DRC saying the intervention will help to ease the movement of people, goods, and services in the region.

Uhuru also thanked DRC for the support it gave Kenya in her successful bid for the UN Security Council seat and assured Tshisekedi, who is also the current African Union Chairperson, that the country will continue to advance "the case and cause for Africa" during its tenure.

"I am also delighted that the Democratic Republic of Congo has shown a strong interest to join the East African Community which I believe will further strengthen the bonds of the people of our great region.”

Tshisekedi thanked his visiting counterpart for the continued support DRC continues to receive from Kenya especially in trade facilitation.

"I will never stop to be grateful for the support Kenya continues to offer DRC," President Tshisekedi said while thanking his Kenyan counterpart for being the only African Head of State at his inauguration ceremony.

He said Uhuru’s visit had presented an opportunity for Kenya and DRC to renew their bilateral relations and outlined security, regional connectivity, and the fight against corruption and economic crimes as the priority areas.

On connectivity, the Congolese leader said his country will work with Kenya on creating a seamless transport corridor from the Port of Mombasa through Uganda into DRC.

Tshisekedi announced a plan by the African Union Special Representative on Infrastructure and Kenya's former Prime Minister Raila Odinga to host an investors conference on the development of the giant Inga Dams on River Congo.

Post a comment
WATCH: The latest videos from the Star
by KEVIN CHERUIYOT Online Journalist
News
21 April 2021 - 19:52
Read The E-Paper