• Justice Ouko also prides himself in being the brainchild of the NCAJ which was proposed in the Ouko Task Force report on Judicial Reforms which he chaired. 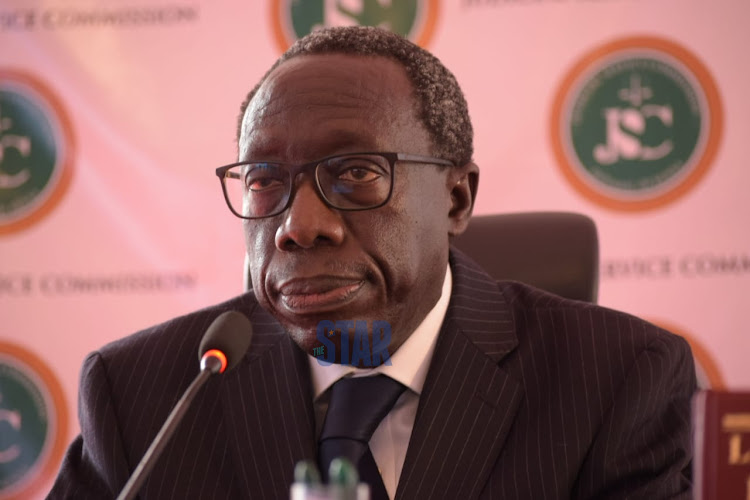 He is seen as both a liberal and progressive judge based on his decisions.

His decisions on the retirement age of Judges case, Maina Kiai, KWS Vs RVA Contractor Ltd on human/Wildlife conflict-compensation shows this.

One who does not believe in the death sentence concept which promotes Hammurabi’s code.

Hammurabi is retaliatory justice ‘an eye for an eye’.

Judge William Ouko’s decisions are inclined towards the holding in the famous Muruatetu decision which to a large extent has addressed the issue so that it is not in every case of a capital offence that a death sentence ought to be imposed.

Justice Ouko defends being recipient of two presidential awards in...

He is also trained in administration at the former Government Training Institute and former Kenya College of Communications Technology Mbagathi.

Justice Ouko prides himself on having a better understanding and knows the synergies and the relationships within the Judiciary having served as secretary of the Judicial Service Commission for over four years.

He also prides himself in being the brainchild of the NCAJ which was proposed in the Ouko Task Force report on Judicial Reforms which he chaired.

Ouko is well conversant with the operation of all levels of the court system, understands the level of cooperation with the other branches of government, while maintaining independence, having served as the Accounting Officer of the Judiciary for many years.

He has been involved in institutional reforms in the Judiciary from the Kotut Committee on the financial independence of the Judiciary and the Delinking Committee that saw the Judiciary cut historical links with the Executive in so far as the terms and conditions of service of staff were concerned.

Other task forces Justice Ouko sat on included the Kwach Committee, which among other things addressed the issues of judicial rectitude.

The judge was tasked in 1994 by the Chief Justice to draft the first code of conduct for the Judiciary.

He also served as secretary to the Goldenberg Commission which looked into one of the biggest scandals during the late President Daniel arap Moi era.

The Ouko Task Force on the Judiciary Reforms was a milestone in the kind of far-reaching recommendations which informed the entire Chapter 10 of the Constitution; the expansion of the JSC, its functions, vetting of Judges and magistrates, the Judiciary Fund, performance management.

As President Court of Appeal, he has brought freshness, teamwork and efficiency despite having half the complement of Judges.

Justice Ouko was appointed a Court of Appeal judge in 2012 to date.

He became the President of the Court of Appeal on March 9, 2018, after he was elected overwhelmingly by fellow judges.

During that time, he served in Malindi, Meru and Nakuru.

Before being appointed as high court judge he was registrar of the high court between 2002 and 2004. He also served as the pioneer Chief Court Administrator.

Currently, he is chairperson of various committees in the justice sector such as subcommittee of the National Council on the Administration of Justice (NCAJ) to monitor the administrative and contingency management plan to mitigate Covid-19 in Kenya’s Justice Sector- 2020 and the Core Organizing Committee the 3rd Regional Symposium on Greening the Judiciaries in Africa, which was to be held between 4th and 6th August 2020, in Nairobi, Kenya, but for coronavirus pandemic.

He studied for his bachelor’s degree at the University of Nairobi and Masters at Egerton university.

He is highly regarded by his peers and staff in the Judiciary and respected by lawyers.