He served as president of the industrial court in Swaziland for eight years.

• He lost his mother in a terrible road accident while at the University of Nairobi and when he came back from the burial, he was informed by the Students that they wanted him to represent them as chair of Sonu.

• The judge said he was admitted to the bar in the morning and that same afternoon he was before a court in a dispute case. 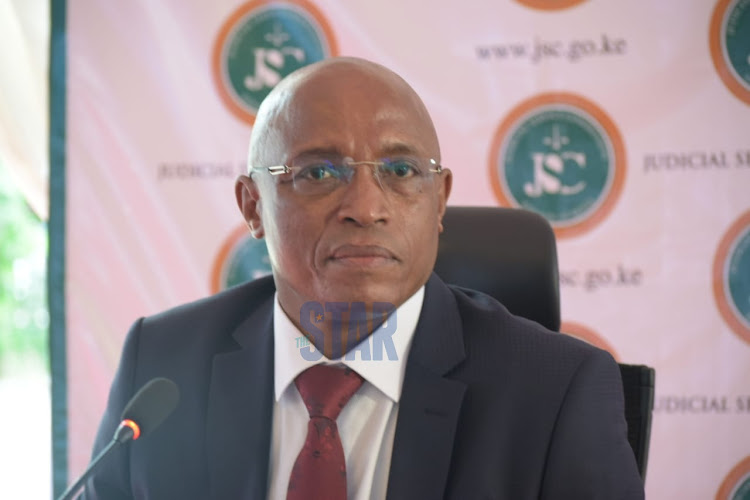 Labour Court Judge Nduma Nderi who was born in Embu says he is the best suited candidate because of his track record rising from the village all the way to being a judge in the Kingdom of Swaziland.

Nderi is one of the 10 shortlisted candidates for the position of Kenya's next Chief Justice.

Judge Nderi on Monday told the Judicial Service Commission panel that he is very friendly and amicable with everyone.

He lost his mother in a terrible road accident while at the University of Nairobi and when he came back from the burial, he was informed by the Students that they wanted him to represent them as chair of Sonu.

He won the elections but they were contested and he was the first leader to face an election petition.

The judge said he was admitted to the bar in the morning and that same afternoon he was before a court in a dispute case.

He was also a defence counsel representing Kenyans against the state which led to him receiving threats.

"I was given threats due to the case I was handling which led to my decision to leave the country," he said.

He was then recruited as an expatriate to the Kingdom of Swaziland.

"I had the privilege of practising before very senior judges," he said.

While in Swaziland he was appointed president judge of the industrial court where he served for eight years.

"I started thinking of coming back after the retired President Mwai Kibaki administration took over,"

Judge Nderi says the Swaziland Kingdom didn't want him to come back to Kenya because he was good at his work.

"I came back with a letter from the CJ in Swaziland to his Kenyan counterpart but I never passed the secretary door," he said.

Judge Nderi said he is very brave and will not run away from the jurisdiction if he faces challenges.

This is after Justice Mohamed Warsame queried on his going to Swaziland when he was threatened for representing activists in court.

The judge said even though that was the reason for moving to Swaziland it was not the only one.

Judge Nderi said if Judge Warsame knew what he went through during that time he would know the seriousness of the threats.

"When I got married most of my friends could not even dare attend my wedding. That's not a period anyone can take for granted we know what happened to people of Kenya at that time," he said.

Nderi said he is also very easy to work with and has never had issues in his court while handling cases.

He then joined the Federation of Kenyan Employers as head of Legal and Industrial Affairs for one year.

He later worked as the principal legal counsel for the East African Community, in Arusha, Tanzania between 2008 and July 2012.

After the promulgation of the 2010 Constitution, Judge Nderi was appointed a judge in 2012 under the established Employment and Labour Relations Courts (ELRC).