Activist Kiama released, to report to police daily for 10 days 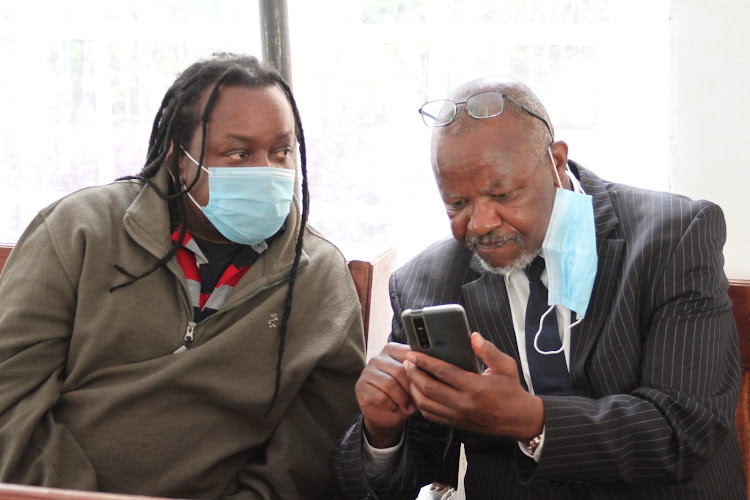 Human rights activist Edwin Mutemi Kiama (left) with his lawyer Haroun Ndubi at a Milimani law courts on Thursday,April 08,2021 when he was released on a cash bail of Shs 500 000
Image: CAROLYNE KUBWA

An activist arrested over the wide circulation of a poster of President Uhuru Kenyatta got a relief after a court declined to detain him for 14 days as requested by the prosecution.

Milimani senior resident magistrate Jane Kamau on Thursday declined to grant the prosecution's application, saying there were no compelling reasons tabled before court to warrant such detention.

"Prosecution has failed to show that Kiama should be physically present during investigations," said the magistrate.

The court also barred Kiama from mentioning the IMF. Kamau ordered him to deposit in court Sh500,000 and to be reporting to the investigating officer daily for 10 days.

The magistrate directed the case to be mentioned on April 17 for further orders.

On Wednesday, Kiama was remanded at Central police station before the court delivered its ruling on whether to grant police 14 days to continue holding him or release him on bail.

In an affidavit filed before court, officer Patrick Kibowen said he is investigating a case of suspected contravention of a number of provisions of the Computer Misuse and Cybercrime Act. He said it also includes false publication contrary to Section 22(1) as read with Section 22(2) (b).

Police said the suspected offences allegedly occurred on different occasions between Monday and Tuesday by way of publication on social media.

“The preliminary investigations have disclosed that the Twitter handles Mwarimu wa Kiama @MutemiWaKiama and Wanjiku [email protected] on which the suspected criminal publication was made is linked to Kiama,” the affidavit reads.

"This is to notify the world at large that the person whose photograph and names appear above is not authorised to act or transact on behalf of the citizens of the Republic of Kenya and that the nation and our future generations shall not be held liable for any penalties of bad loans negotiated and/or borrowed by him,” the poster is quoted as having read.

Kibowen added that the words amount to false publication contrary to the law.

“As a result of the suspected link of the respondent to the said Twitter handles and the publications thereon, Kiama was accordingly arrested on April 6,” the affidavit reads.

During his arrest, Kiama was found in possession of three laptops, a Toshiba hard drive and two mobile phones belonging to him, the officer said.

Kibowen said the assorted items were submitted to the digital forensic laboratory for examination and reports had yet to be received.

He said he had reasonable suspicion that Kiama must have acted in collusion with other persons whom they were still pursuing.

“We have reasonable suspicion that Kiama, if not detained as requested, may remotely delete the suspected false publication, thereby interfering with the investigations,” Kibowen says.

He said owing to the complexity and nature of the cases, he requires the 14 days to enable him and other officers to carry out comprehensive and in-depth investigations.

The application was, however, opposed by Kiama’s lawyers Martha Karua and Harun Ndubi, who said the alleged offences were bailable.

“The offence is bailable and it will give the officer investigating the case enough time to conclude their investigations. Kiama was arrested on Tuesday in his house while eating his lunch and the officers did not even give him time to finish. They know where he lives. Admit him to free bond,” Karua said.

The application by the DPP seeking to detain him for 14 days is laughable, she said, urging the court to release him on bail.

“It’s unprocedural to have police search a suspect’s house without a warrant and under the Cybercrime Act, the police are supposed to have a warrant. Treat both the republic and the suspect equally,” the court was told.