Theatres and intensive care units are bearing the brunt of the shortage, with available oxygen only being used to run emergencies.

• Data by the Council of Governors shows that cumulatively, 58 oxygen plants are distributed across the 47 counties, out of which 42 are functional.

• In the past year, the average consumption at KNH sharply has risen from 4,000 litres to 8,000 litres a day 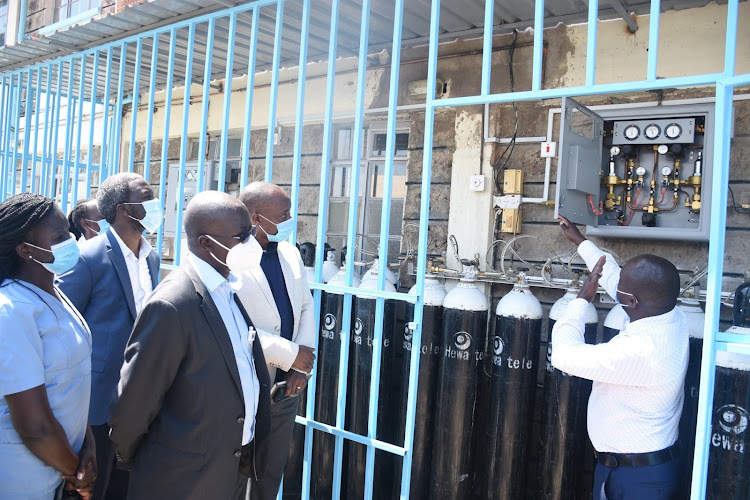 Kenyatta National Hospital receives oxygen cylinders from the Centre for Public Health and Development and Hewatele to help in the care of critical patients.
Image: MAGDALINE SAYA

Oxygen therapy is recommended for all severe and critical Covid‐19 patients.

With Kenya experiencing the third wave of the virus, the number of critical care patients requiring oxygen has been on the rise, surpassing 200. There were just 20 cases in early January.

However, the shortage of medical oxygen has continued to hit the country, with reports indicating that Kenyatta National Hospital has been worst hit.

Being a national referral hospital that also serves the region, the hospital receives a number of patients, some that are in need of ventilatory support.

But hospital CEO Evanson Kamuri has noted that despite the challenges, the facility is operating full capacity of 2,300 patients with critical functions such as emergency surgery, cancer-related operations, obstetrics operations and the infectious disease unit running as usual.

“Yesterday, the hospital received 3,000 litres of oxygen as top up that has been supporting the day to day running of the facility. This, however, is not enough for full operation of the hospital since we require 8,000 litres per day in the current Covid-19 situation,” Kamuri said.

The CEO noted the facility has experienced a surge in oxygen consumption due to the Covid pandemic, adding that in the past year, the average consumption has sharply risen from 4,000 litres to 8,000 litres a day.

This, he said, is due to an increase in the number of patients requiring ventilator support and critical care, as they are high oxygen dependent.

“All patients are receiving the required services. We want to assure Kenyans that any emergency or lifesaving procedures will be handled by our doctors. The hospital remains committed to the provision of quality healthcare to our patients,” Kamuri said.

Other county referral hospitals have also been scaling down their operations, with those such as elective Caesarian section being suspended to make room for emergency cases.

Data by the Council of Governors shows that cumulatively, there are 58 oxygen plants distributed across the 47 counties, of which only 42 are functional.

CoG Health committee chairman Anyang Ngong’o said 2,828 oxygen cylinders and 730 concentrators are also available, with 3,601 isolation beds having been connected to oxygen across the counties.

Theatres and intensive care units are bearing the brunt of the shortage, with available oxygen only being used to run emergencies.

According to the Health ministry, the total production and requirement for the industry was about 410 tonnes as per last year.

But with the rising cases of critical care patients in need of oxygen in the country, that quickly went up to about 560 tonnes in January and the country is now heading for demand of double the last year figure at 880 tonnes.

It is estimated that there are more than 20,000 cylinders lying idle in various hands in the country. Each cylinder costs roughly Sh40,000.

Health CS Mutahi Kagwe has appealed to those hoarding cylinders to release them in an effort to help salvage the situation.

“The situation at the moment is such that the industry is completely stretched and if we go any further than that then some immediate steps will have to be taken,” Kagwe said.

“There are a lot of facilities with idle cylinders and I don’t think people are appreciating just how important it is not to have cylinders lying around when people are dying because of lack of oxygen.”

The ministry is in talks with the National Treasury to help address the issue with the possibility of lowering taxes on gas cylinders.

“We chose oxygen cylinders because we saw that many hospitals were in dire need of oxygen used to facilitate treatment for Covid-19 patients,” chairman Narendra Raval said.