• On Tuesday, he served the last of Buddy's loyal patrons. 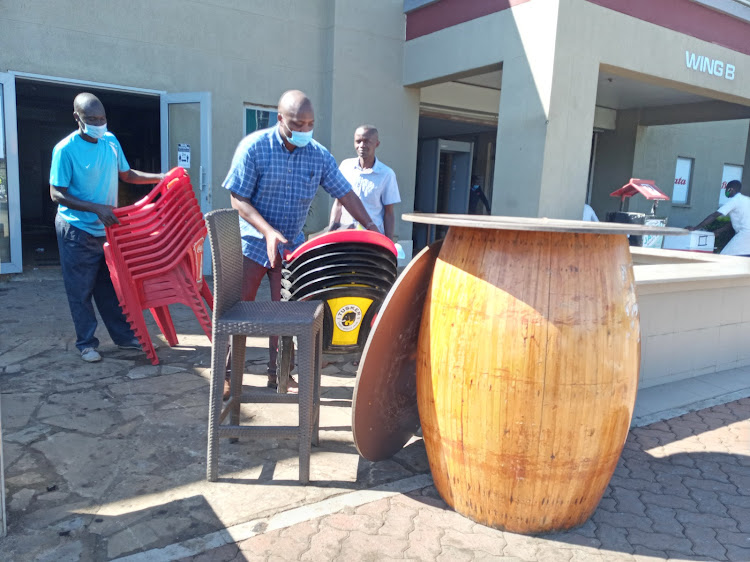 Buddy's Bar and restaurant employees remove their belongings from the building at United Mall a long Kisumu-Kakamega road on April 7, 2021.
Image: DANIEL OGENDO

Popular entertainment joint Buddy's Bar and Grill at the United Mall in Kisumu closed on Tuesday after nine years of operation.

Its proprietors Jasom Asselstine and his wife Diana said the Covid-19 pandemic and rules on the sale of alcohol and public gatherings had made it impossible to run it.

The Canadian, 45, came to Kenya in 2012 and soon set up the business. On Tuesday, he served the last of Buddy's loyal patrons.

On Wednesday, Asselstine told the Star rental pressure and Covid restrictions had been the last straws that broke the camel's back.

“We survived the road closure when the Kisumu Boys - Kondele- Mamboleo dualling was ongoing. The business further survived the election-related violence that saw us close for 18 days, " he said.

The business, set up by the family for Sh15 million, had survived the first and second waves of the Covid-19 pandemic.

But the lethal third wave and fresh guidelines to contain it put a stop to the once-thriving business.

" In the bar business, revenue is generated at night. That's the time these small establishments do business. Time restrictions that require us to close at 9pm have finally killed our business," he said.

Last year, Asselstine was forced to reduce the number of employees from 32 to 15.

More job cuts had followed. "We had to reduce the staff numbers to just five," he said.

The business was still not able to meet its obligations.

The investor had renovated the premises on three occasions, buying new furniture and installing a modern stereo system that cost Sh7 million. The cash could not be recouped.

Buddy's struggled to pay the skeleton staff and the Sh400,000 rent.

"We opted to remain with the bar and grill as a way of scaling down operations. We did away with the garden bar but this was not enough to salvage the business," he said.

The family had another restaurant in Kisii that also closed during the last election.

" We have to decide what we have to do as a family. We might decide to go back to Canada," he said.

He said it was unfortunate that most businesses were folding up, leaving a huge loss to the country's economy

"This is another lost investment opportunity, claimed by this monster that has stifled the growth of the economy and thrown millions of people into joblessness," he said.

The investor suggested that bars and restaurants should have been given a waiver of fees charged by the government immediately Covid-19 was reported to save the business.

He also faulted the government for the night restrictions. "How is the risk of contracting Covid-19 accelerated in the evening?" he asked.

He said it was ironic that markets are buzzing during the day, including malls yet bars cannot open.

"I strongly feel that the bar industry has been unfairly targeted. The opening of schools caused the third wave that we are now battling," he said.

The closure of Tuskys Supermarket which was the anchor tenant at the United Mall further complicated matters for his business.

When he moved into the mall, the management had conducted a survey that showed 8,000 people would visit the mall for shopping each day. There were other businesses operating from the mall00.

"The high traffic was a blessing to our business. The shoppers would while away time at the bar after shopping," he said.

"Today you would be lucky to get 500. The traffic is no more, except for the staff working within the mall."