• National Assembly Health committee chaired by Murang’a Woman Representative Sabina Chege said the changes may cripple workers’ union as they would deny them direct representation at the boards and councils. 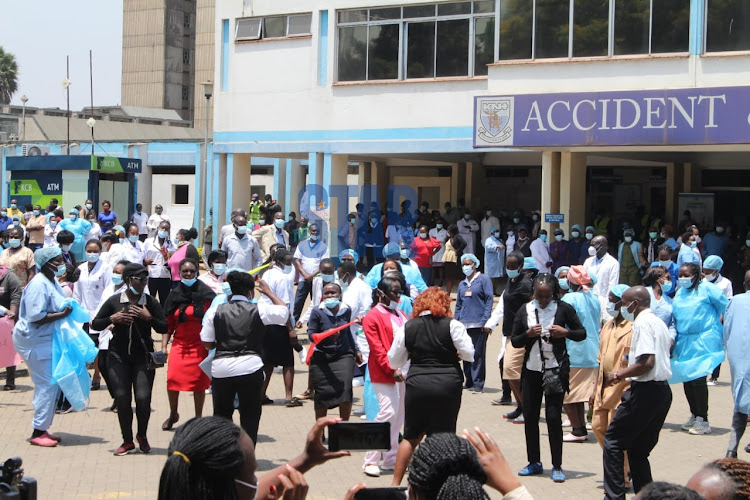 MPs have temporarily stopped a bid by the government to kick out workers union representatives from boards and councils in the health sector.

The plan was in the proposed Health Laws Amendment, 2021, which sought to alter the composition of the boards and councils.

The proposed law seeks to give the Cabinet Secretary the powers to nominate other professionals other than health workers’ union to respective boards.

National Assembly Health committee chaired by Murang’a Woman Representative Sabina Chege said the changes may cripple workers’ union as they would deny them direct representation at the boards and councils.

The Kenya Pharmaceutical Association is poised to lose its slot in the Pharmacy and Poisons Board should the proposal sail through.

Kenya’s trade unions COTU, Knut, and Kuppet as well as the Federation of Kenya Employers may also lose their direct nominations to the NHIF board.

Kenya Medical Association and faith-based organisations may also lose their slots on the board.

The National Hospital Insurance Fund board would comprise a non-executive chairman appointed by the President, Health PS, Treasury PS and Attorney General.

The proposed law posits that one person would be nominated by an umbrella body representing employers, trade unions, and one nominee by the Health CS.

The new law proposes that the board have a chair appointed by the President; Health PS, Treasury PS, and four nominees from the medical and dental profession.

“The persons will be selected through conventional board resourcing procedures, including applications, referrals, and knowledge of the market and industry actors,” the bill reads.

The council, under the proposed law, is set to comprise the chairperson, PS health, PS treasury, AG, four CS nominees – three from the nursing and midwifery profession.

Health PS Susan Mochache said the proposals are to bring independence, enhance governance and accountability of the boards and councils.

The bill, which was shelved after it was lined up for first reading, is being relooked into by a team at the Health ministry before introduction to Parliament.

The nominees by the CS would be selected based on their experience in finance, audit, nursing, business management, and public health.

The persons will be selected through conventional board resourcing procedures, including applications, referrals, and knowledge of market and industry actors.

Kenya Medical Supplies Authority board is to be changed to comprise the Health PS,  Treasury PS, a representative of the Council of Governors and three nominees by the Health CS.

At the KMTC board, the bill proposes to remove the director-general of health as a member and the role taken by the Attorney General.

Members of the Association of Kenya Medical Laboratory Scientific Officers have also been kicked out of their board in the proposed legislation.

Various players are also to be kicked out of the Tobacco Control Board amid the proposal for a chairperson nominated by the President; PS Health; PS Treasury, Attorney General, and five nominees by the Health CS.

The changes would also affect the Council of the Institute of Nutritionists and Dieticians; Cancer Prevention; Public Health Officers Council; Counsellors and Psychologists Board; Physiotherapists Board; and Kenya Clinical Officers Association.