• Taraweeh are special prayers conducted during Ramadhan, after the daily Isha prayers at around 8.30pm. 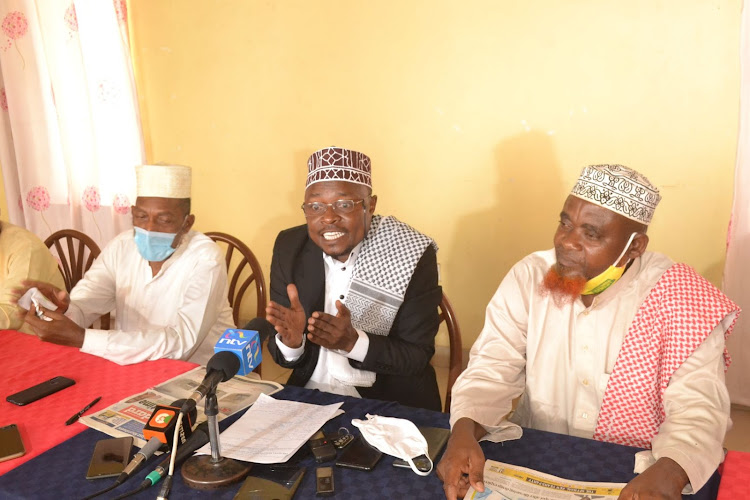 Muslims in Mombasa are appealing to President Uhuru Kenyatta to delay the curfew ahead of the start of the holy month of Ramadhan.

Ramadhan is to begin around April 15.

However, the Muslims, mostly drawn from Kenya Muslim National Advisory Council, on Sunday said the curfews in the country will interfere with Taraweeh prayers.

Taraweeh are special prayers conducted during Ramadhan after the daily Isha prayers at around 8.30pm.

They are a special form of Islamic meditation meant to bring the faithful closer to God and the aim is to ensure one reads the entire Quran by the end of Ramadhan.

“Muslims in Nairobi, Nakuru, Kajiado, Kiambu and Machakos will not be able to conduct these prayers at all and those in the rest of the country will have little time to pray," Sheikh Ngao said.

He spoke after a meeting of Kemnac officials to plan for Ramadhan at a hotel in Nyali.

For about three minutes he allowed the adhan from a neighbouring mosque to be completed.

“We have more respect for him now and we baptise him Sheikh Uhuru Kenyatta for that. Now we would like the sheikh to help Muslims by extending the curfew by an hour to start at least at 11pm,” the sheikh said.

“We would appreciate the President giving us that Ramadhan present,” Sheikh Kinyua said.

The two also called on donors and governments to channel Ramadhan food and benefits to Muslims through Islamic bodies not soiled with questionable court cases.

“Kemnac has remained without blemish and it would be the best body to channel Muslims’ benefits through it," he said.

They said in most cases, benefits from Muslim governments and organisations do not reach Kenyan Muslims due to corruption.

At the same time, the Muslim clerics warned against politicisation of the Covid-19 vaccines .

The Muslim leaders said Muslims who want to be vaccinated against Covid-19 should be allowed to make their own independent choices.

“It is a voluntary exercise. No one should be forced to take a one vaccine or another. If any Muslim wants to be vaccinated, let them do so on their own volition,” Sheikh Ngao said.

A section of Muslim leaders has associated the AstraZeneca vaccine with President Kenyatta and his supporters and the Russian Sputnik V with Deputy President William Ruto and his allies.

“We can now see there is politics in this vaccine campaign,” Sheikh Ngao said.

On Friday, Muslims living in Nairobi's Kiamaiko ward pledged not to take the Covid-19 vaccine until their religious leaders approve of it.

Kiamaiko is an estate within Mathare constituency. Most residents are Muslims. They say the AstraZeneca jab is haram (illegal in Islamic law).

Residents who spoke to the Star said they are hesitant to receive the jab because of fear that it contains pork products and concern that it causes blood clotting in some people.